As mentioned before, we’ve had a houseguest for the past week.  Bruce came for a visit from the United States and I’ve been busy playing tour guide for much of that time.  We have seen a lot of things and I’ve been so much on the go that I haven’t had time to properly update the blog – especially since the political unrest here in Thailand has increased recently and deserves some attention.

Let me begin with the political situation, since some of you have already expressed your worries and concerns. 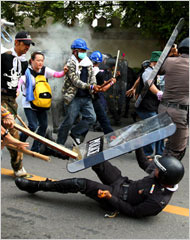 To start off, rest assured that things are still perfectly safe here.  Unless you decide to go wander through the middle of the protest area (which Bruce and I did on Sunday, before all of this boiled over), life in the city is proceeding as normal.

Sunday was a local election here and one of the People’s Alliance for Democracy (PAD – the protesters) leaders was arrested as he came out of hiding in order to vote.  Realizing this would happen, he gave his supporters a letter to read after his arrest.

Subsequent to his arrest, the protests swelled in size.  They expanded to include the area around the parliament building, effectively trapping members of parliament inside.

When the police moved to clear the protesters, using tear gas and – some reports say – small explosives, there were dozens of injuries and two deaths.  The autopsy report on one of the deaths indicate that the decedent died as a result of injuries from an explosive she had on her person, although I don’t know how that was established. 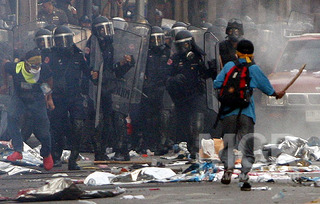 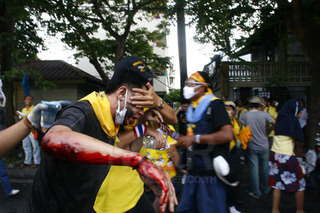 Among the injuries were at least two people with severed limbs, providing some of the most shocking early morning news footage I’ve ever seen on television.  It is not clear how the injuries happened – do tear gas cannisters provide enough explosive force to tear off the bottom part of a leg?

Some level of calm has been restored, but the PAD has insisted they are the victims here and will remain in place until they have overthrown the government.  In short, the cycle will continue. 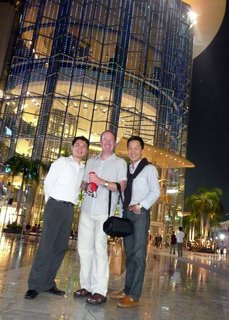 Turning our attention back to Bruce’s visit, as I mentioned, we have been very busy.  Some guests just grab the map, ask me to point them towards the transit system, and are off.  Other times, I get the opportunity to revisit many parts of the city with my guests.

Bruce’s friend Fai, a Thai who lived in San Francisco many years and is back in town, was able to join us for dinner shortly after Bruce’s arrival.

We met for dinner at Greyhound Cafe and had a nice visit.  While we haven’t met Fai before, he was very nice and reminds us of a friend in Hong Kong.

Left: Fai, Bruce and Tawn pose on the rain-slicked concrete in front of Paragon shopping center.

Unfortunately, Fai was heading out of town so there would be no more opportunity to visit with him.  So I put on the tour guide hat – actually, Bruce ended up with the hat to protect him from the sun – and we set off.  One of the first stops was the obligatory trip to the Grand Palace, the Temple of the Emerald Buddha, and the Temple of the Reclining Buddha – a trio of sights that are really a must-see. 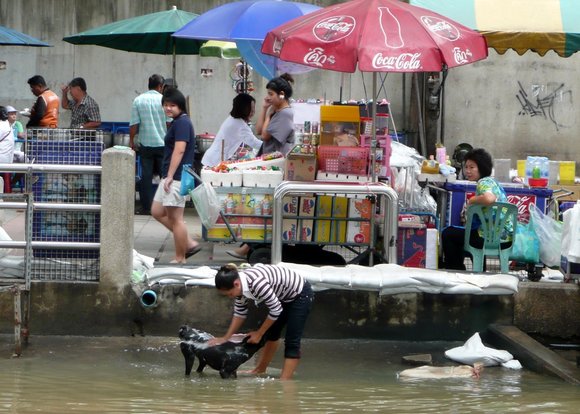 Down by the river, as we waited for the boat, we saw the funny sight of a lady washing her dog in the canal.  I’m not sure which was cleaner afterwards: the dog or the canal!

Bruce brought his new High Definition digital video camera with him, able to record dozens and dozens of hours of sights and sounds.  No doubt he will have a lot of editing to do when he returns! 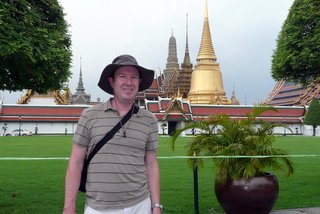 With it being off season and a thunderstorm hanging over most of the city, we found the Grand Palace and Temple of the Emerald Buddha emptier – and cooler – than I have ever seen it.  While Bruce did the audio tour, I sat on a marble-floored sala – a pavilion – and edited training materials for my job.  With a deadline looming and still a lot of work to do, I had to squeeze every minute of work out of my time spent as a tour guide.

Passing through the Palace area, I snapped two nice photos of one of the main halls. 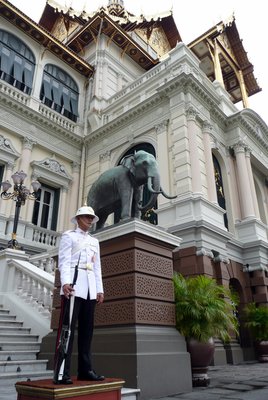 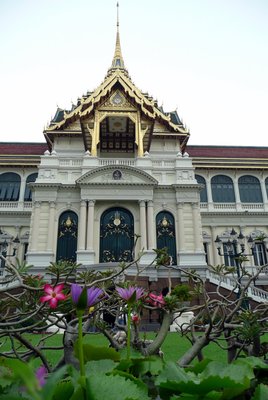 Heading over to Wat Pho – the Temple of the Reclining Buddha – we encountered several touts, helpfully informing us that the temple was closed and would we like to instead go see the giant standing Buddha.  Of course, this was just a ruse to get us to go visit “gem” factories.

Visitors beware: Khrungthep is full of these shady characters.  I noticed it much more this time than on previous visits to the sights and was, frankly, a bit perturbed by it.  Tourism is such an important source of revenue for the kingdom that with the downturn in bookings caused by the political violence, they can scarcely afford to lose more tourists because of scams.

We were rewarded for our perseverance: at Wat Pho we saw some craftspeople restoring detailed painting along the windows and door frames.  I cannot imagine the hours they must have spent, hunched over or laying on their side to add the small swirls and flourishes. 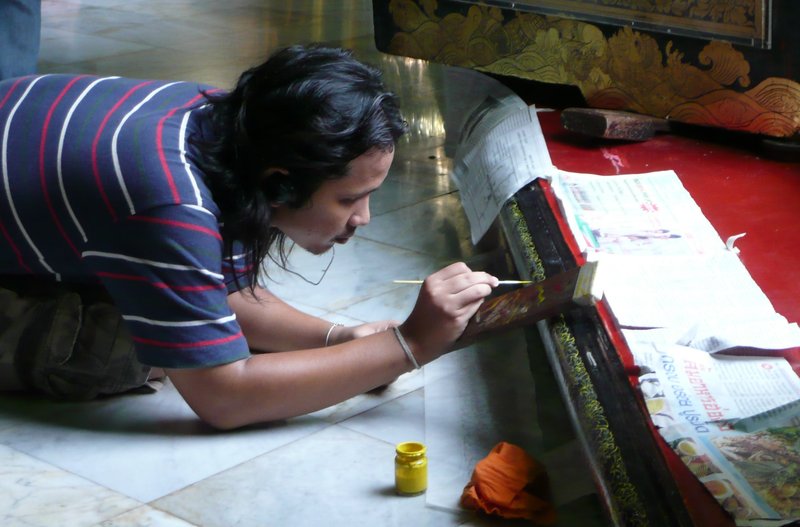 While at the temple, we stumbled upon a monk conference.  Literally, it was a gathering of monks including visiting ones from China and Hong Kong.  According to one monk with whom I spoke, there were 10,000 participants.  They were sitting on mats surrounding the main wihan – chapel – of the temple, until the rains came and drove them under the eaves.  The chanting continued, though, as more and more monks arrived by bus and taxi, streaming inside and finding their appointed places. 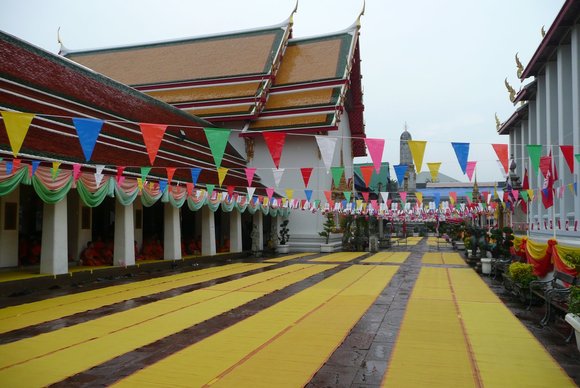 There is some video below.

That sums up our first day of hiking about town.  There is more to share and I will try to post it as soon as possible.  Meanwhile, hope everyone is doing well.  I’m quite behind on checking and responding to others’ entries so my apologies if I have missed any important events.