In the process of sorting through things (I’m always trying to get rid of things I don’t need to keep anymore, sort of a reverse pack rat) I came across some CDs of photos from 2000, when Tawn and I first met.

Dating all the way back to the 4th or 5th of January 2000, here’s the first picture I ever took of Tawn.

Cute, huh?  What a baby face!  Here’s the photo of one of our first dinners together, taken at the now-defunct Anna’s Cafe on Soi Saladaeng.

Yes, I had glasses back in those days.  But no hair.  It wasn’t until the middle of 2000 that I had lasik surgery.

Tawn moved to the United States a few days before Christmas 2000 and we flew back to Kansas City to join my family for the holidays.  Even back then, Tawn was warmly welcomed to the family.  Here we are at my brother-in-law and sister’s old house, opening Christmas presents.

Looking back at these pictures, I don’t think we’ve changed all that much.  If you look at us up close, we have a few more wrinkles and a few more grey hairs, and I’ve gained a few kilograms since then, but not all that different.

Speaking of changing looks, Tawn just had his hair cut quite short on the sides.  I’m always urging him to get the sides shaved because I like the way it looks on him.  He’s always very hesitant, feeling that it makes his face look too narrow.  I think it accentuates his face.  Here’s the picture of the new haircut.  You’re welcome to share your thoughts about it. 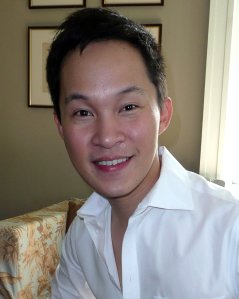 One final one, from March 2001, shows Tawn and my good friend and former roommate Anita at a birthday party held and Brad and Donna’s former house in Sunnyvale.  Nice back-lighting!

Looking more recently, almost exactly two years ago, here we are at Bua and Pom’s engagement party.  Bua very thoughtfully made CDs for all her guests, containing copies of the professional photos featuring the guests and, of course, the photos of the bride and groom and wedding party.  It is nice because the photos you always take yourself never turn out so nicely.  I hadn’t seen these before – they were hidden away on a CD that Tawn tossed into the box of computer things. 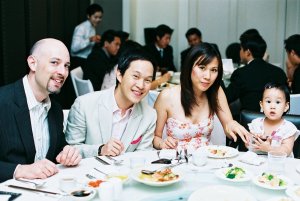 Tawn and me with his school friend Pim and her adorable daughter Tara.  Tara, who is now going on four years old, always asks after me whenever Tawn goes over for a visit.  She keeps asking why I don’t have any hair.

Finally, here’s a picture of the two of us at the engagement party.

Some of the best pictures of us have been taken at weddings.  It helps to have a festive atmosphere and a professional photographer.  And a glass or two of wine.

36 thoughts on “Chris and Tawn: The Early Years”