Okay, I’m about to write a “normal” entry but first, let me give you just a bit of an update on the Thai political situation:

The information I gave yesterday about the Election Commission recommending the dissolution of the ruling People’s Power Party (PPP, which Prime Minister Samak heads), turns out to be correct.  Originally, I didn’t see it reported elsewhere but have now found several Thai sources that confirm it.

I’ve heard from supporters on both sides of the conflict as well as from people who are sitting in the middle, unimpressed by the extreme actions of both sides, and I’m thankful to all of them for sharing their insights and opinions.

The People’s Alliance for Democracy (PAD, the anti-government protesters) have made the first intimations of a possible compromise to end the confrontation, but their number one requirement is that Prime Minister Samak resign and dissolve his cabinet.  Not surprisingly, Samak refuses to do so.

Things are moving very slowly towards some possible resolution, emphasis on the “slowly” part.  The Election Commission’s recommendation, should it be approved by the Constitutional Court, would largely moot the conflict as the PPP would be dissolved and new elections would have to be called anyway.

If I was to try to give you some sense of the general feeling in the country about the way towards resolution, the Bangkok Post’s front page commentary in Wednesday’s edition might encapsulate it.  The full commentary is here but the bullet points are as follows:

So that’s where things stand: at an impasse.  We’ll see how the next few days develop but I’d place my money on an eventual resignation by the Prime Minister and the calling of snap elections.

How is this affecting you and Tawn?

This is a common question I’ve received and thank you for expressing your concern.  Yesterday I received a call from a friend who is to travel here next week for a conference.  Worried about what he’s seen on TV, he was going to cancel his trip for fear of his safety.

Let’s make this clear: there is no danger in visiting Thailand nor in living here.  There is no reasonable prospect of violence or danger in the near future that would effect visitors or residents.  Fears of a Rawanda-like genocide or a Balkan civil war are completely misplaced.

What you see on television is the narrow width of a camera lens, pointed at the most dramatic and newsworthy thing it can find.  If you could pull back to a very wide angle, you would see that life in the city and the nation are continuing as normal.

Long before I moved here, Tawn took me to “the red noodle shop” (real name, Yen Ta Fo) which was located next to a driving range further down Sukhumvit.  The shop eventually closed as development took over that area, but the owners continued to ply their trade at outlets in malls around the more suburban parts of the city.

Recently, though, good news: Yen Ta Fo opened a branch in Ploenchit Centre, located a two-minute walk from Tawn’s office.  Taking over a defunct Haagen Dazs and a poor imitation of a NY-style deli, Yen Ta Fo is attracting the crowds for lunch.

Their specialty, the red noodles (below), is a mixture of wide rice noodles, mixed seafood, and a slightly vinegary sauce.  I don’t personally care for it as it is too vinegary for me, but Tawn loves it and lots of other people were ordering it, so I consider it a shortcoming of my tastebuds. 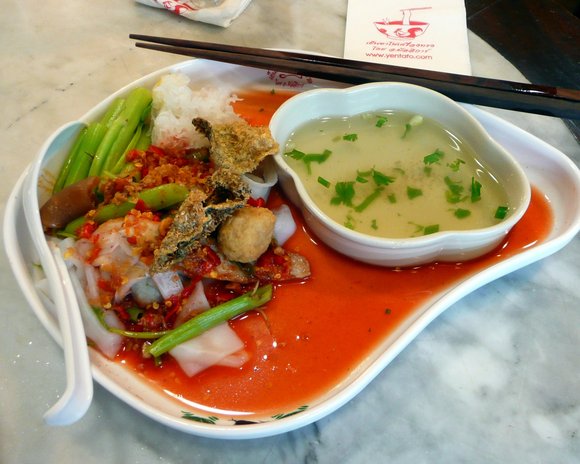 I had a great dish of pork spareribs (below) that had been stewed until the meat just jumped off the bones.  The sweet-spicy sauce is so satisfying and made for a perfect rainy afternoon meal. 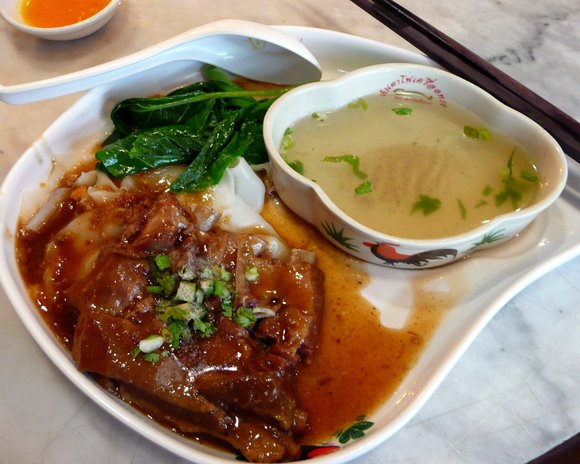 On the side we ordered the Yen Ta Fo version of chicken satay (below).  They prepare their chicken with a spicy curry paste rub that adds a lot of flavor and a fair amount of heat, instead of the usual continuous basting of coconut milk.  Their sticky rice (in the basket) was a little undercooked, a bit more “tough” than “sticky”. 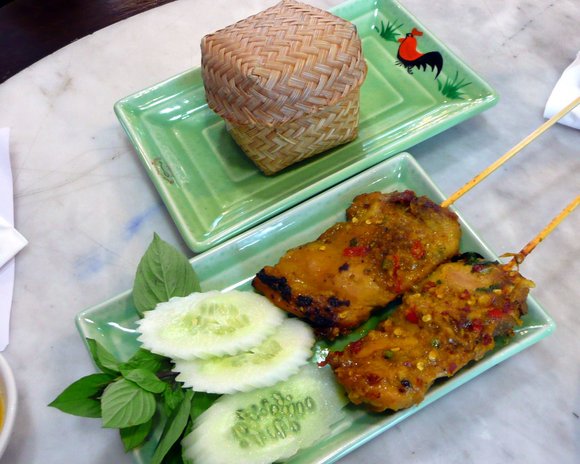 Beyond the Yen Ta Fo restaurants, the family has a series of more upscale establishments with the name Mallika.  Website here.  No doubt we will be back to Yen Ta Fo regularly. 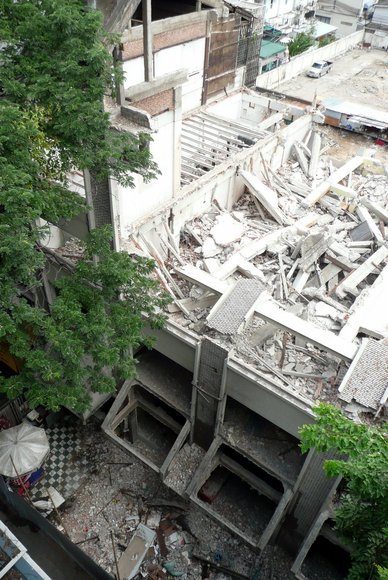 On the other side of Tawn’s office is a block of traditional shop houses.  These four-story buildings housed a shop or small restaurant in the ground floor and then residences above.

There was one restaurant to which we regularly went, and Issan (northeastern Thai) style place that served wonderful grilled chicken.

Sadly, the shops have been closed down and the entire block is being demolished.  Not sure what will replace it but the property, on the corner of Ploenchit (Sukhumvit) and Whittayu (Wireless Road) is next to the Plaza Athenee Hotel, kitty-corner to the British Embassy, and is one of the more valuable locations in the city.

I predict another office tower / mall / condo complex.  Anyone know for sure?

People used to congregate on the outdoor patios where the umbrella still stands, eating at folding tables during the lunch rush.  Now it is being taken down, story by story, building by building.  You can see how much has already been done in the picture below.  The Plaza Athenee is just behind (to the left) of the low-rise pink building. 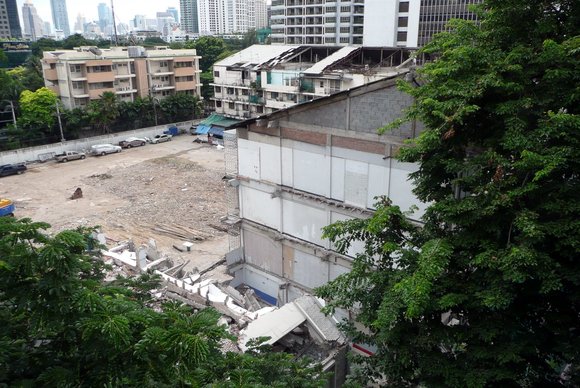 Let’s hear it for ongoing development.  It is a shame that old buildings and family-owned small businesses end up closed to make way for progress.  The only positive to this is that the location, adjacent to a mass transit station, is a good place for denser development.  Unfortunately, the development will benefit primarily those with money, not the lower income families who used to earn a living there.

One final construction shot, this one from the huge site next to the Asoke Skytrain station.  The excavation has started and I was tickled to see that one of the cranes bears a warning in Japanese.  I imagine it isn’t much help for the construction workers, who primarily come from upcountry Thailand. 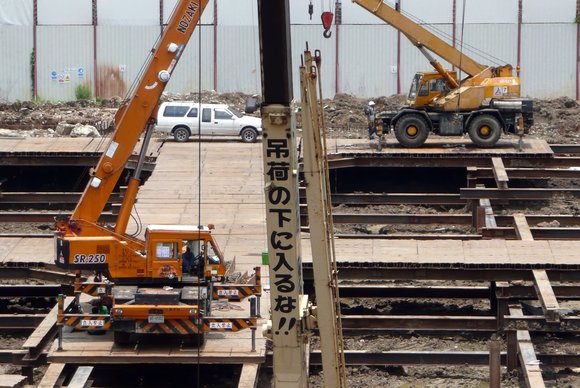 Do you know what it says?

29 thoughts on “The Skinny and Wide Rice Noodles”