Earlier in this week I was in touch with Doug and we agreed that we should get together as it has been months since we last hung out.  So I invited him over for brunch and extended the invitation to Ken and Roka, as this is the usual guest list for brunches with Doug.

Prep work began Saturday afternoon.  There was a lot of prep work and one gets hungry, so I made an asparagus, bell pepper and onion quiche for Saturday dinner.  Thanks to Brent for the idea of making the quiche in a springform pan.  What a good idea and nice presentation!

Begin by blind baking the crust for about ten minutes.  Then pull out the peas, bake for another 2-3 minutes to dry the interior a little bit, then add the filling and return to the oven.  The finished product was beautiful and tasty. 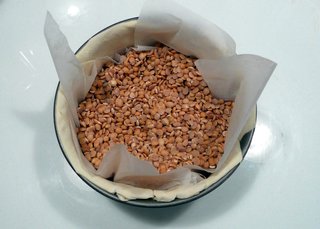 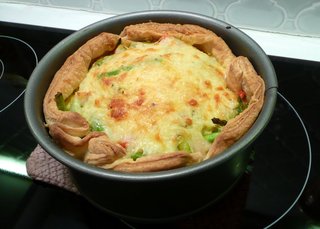 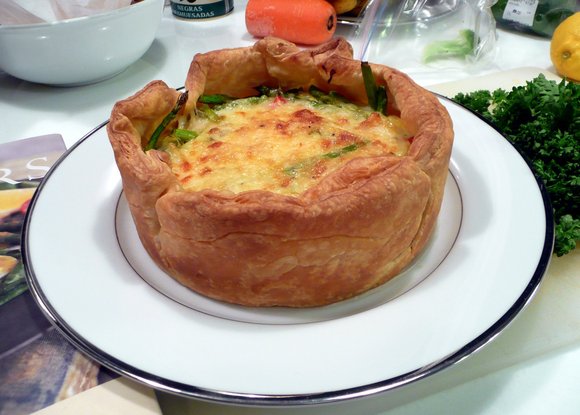 Below, me in the kitchen.  Nice view. 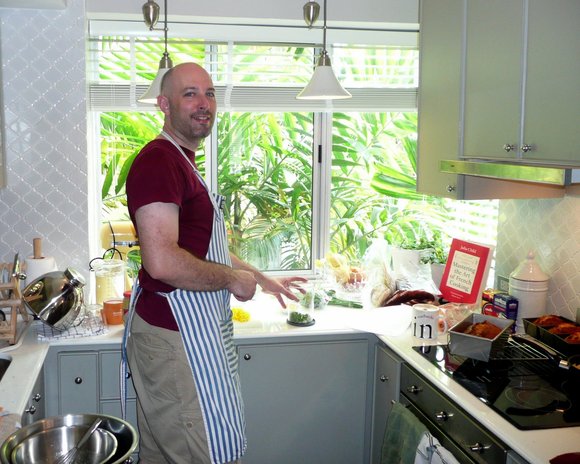 Straying from the more traditional brunch menus, I looked to the Mediterranean for inspiration.  Our menu:

For the eggplant and red pepper dip I started by roasting eggplant until soft.  I cut off the skins and cubed the meat, combining with onions, shallots and bell peppers.  Some balsamic vinegar added a rich sweetness and a jammy texture and I finished with parsley and toasted pine nuts. 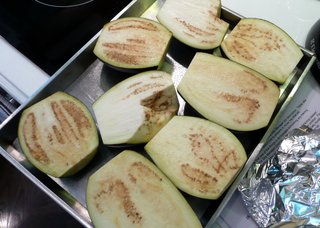 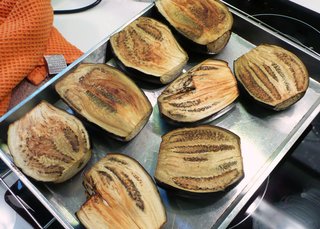 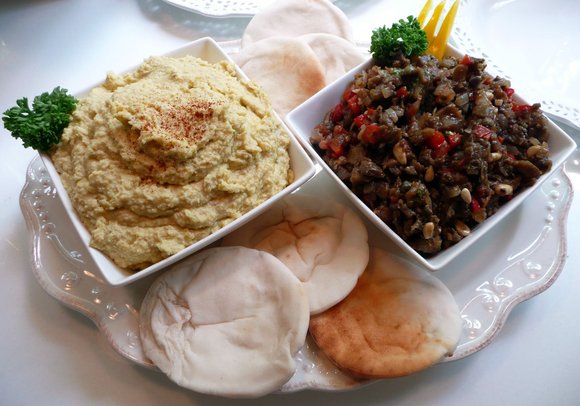 Starting with a variety of local mushrooms (which, ironically, are less expensive than the standard white button mushrooms), I roasted them in olive oil and garlic then blended them with chicken stock.  In a second pot I sauteed aromatics (shallots, onion, celery and carrot) with fresh thyme and marsala wine, then blended with chicken stock, straining out the solids.  Finally, I combined the two pots, reducing the liquid by about 25% before finishing with a little buttermilk for a rich tanginess.

For effect and convenience, I served the soup in cappuccino cups so they could be sipped by our guests.  If I had a soda bottle, I would have tried something like a white truffle foam to top the soup. 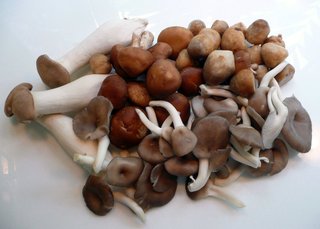 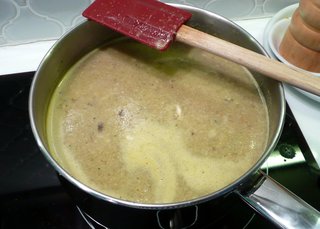 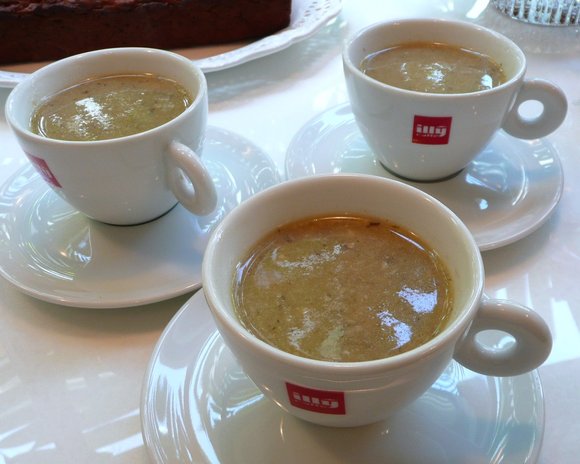 Quinoa, a grain indigenous to South America, is a tasty way to get a complete non-meat protein into your diet.  Cooked similarly to cous cous, I combined it with chopped yellow bell peppers and green onion, then dressed it with a vinaigrette made with lime juice, olive oil, and freshly grated ginger.  It made a nice accompaniment to the chicken breasts. 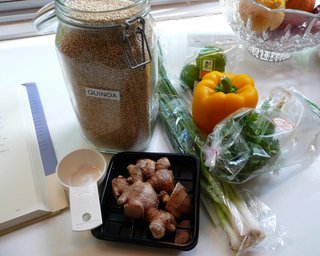 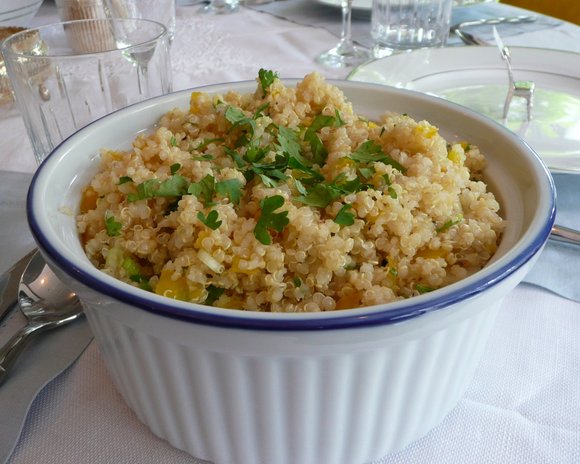 The chicken breasts were marinated and then poached in a combination of white wine, olive oil and lots of shallots.  After poaching they were allowed to cool for a half hour in the poaching liquid, which encourages more moisture to be retained in the meat.  The chicken was sliced on the bias and then served with an easy sauce made from lots of fresh tarragon and parsley blended with dijon mustard and mayonnaise. 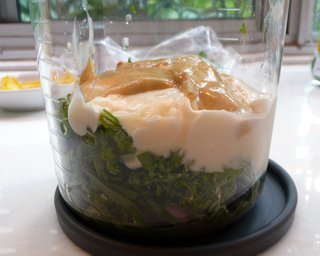 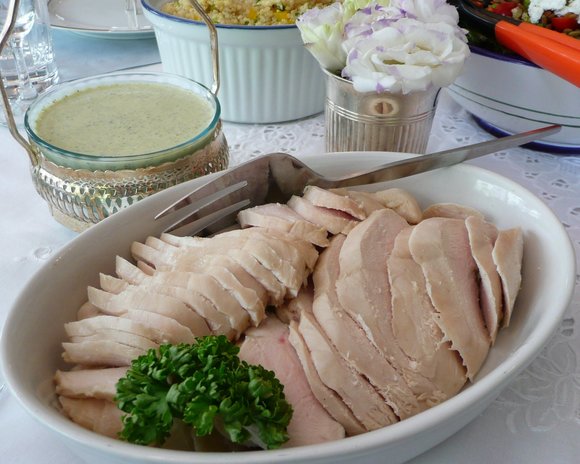 The salad, which could have stood on its own without the greens (although it was perfectly nice with them), was made of lentils combined with small-dice carrots, celery and fennel, along with black olives and cherry tomatoes, seasoned with a lemon vinaigrette and then sprinkled with cheese.  Normally, feta would be used but in this case the local ricotta has a feta-like texture. 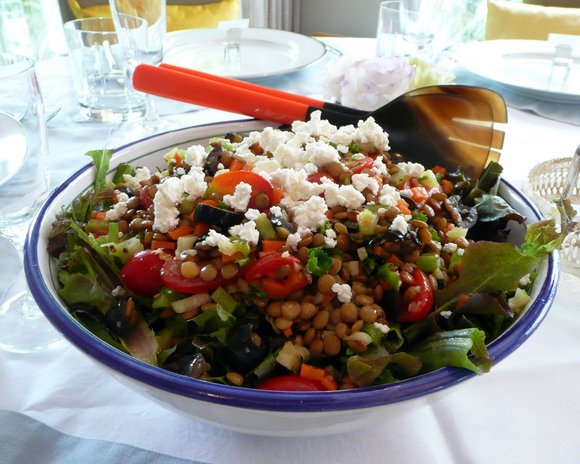 For dessert I made oatmeal banana bread.  I also made small loaves for each guest to take home.  When I went to the local street market to buy the bananas with Tawn, the vendor laughed when I said I wanted the most overripe bananas in order to make a cake.  “Oh!” she said to Tawn, “Are you going to bake it?”

“How did he learn that?  He must have a Thai wife,” replied the vendor.

The secret to this bread is that is has oatmeal in it along with plenty of freshly-chopped walnuts.  It is very tasty and went well with the whipped cream cheese, to which I added fresh lemon zest and Chiang Mai sunflower honey. 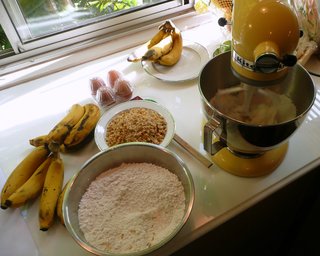 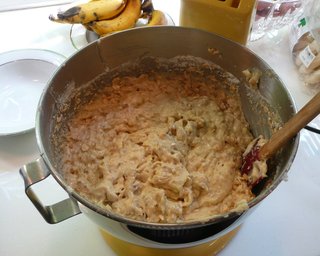 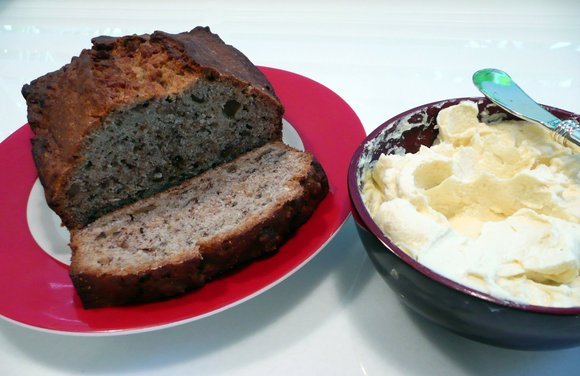 Tawn handled the table setting, for once not getting too worked up over how the entire house looks.  It looked fine and everyone was comfortable.  Making their debut were the little placecard holders Tawn picked up in Paris: tiny chairs. 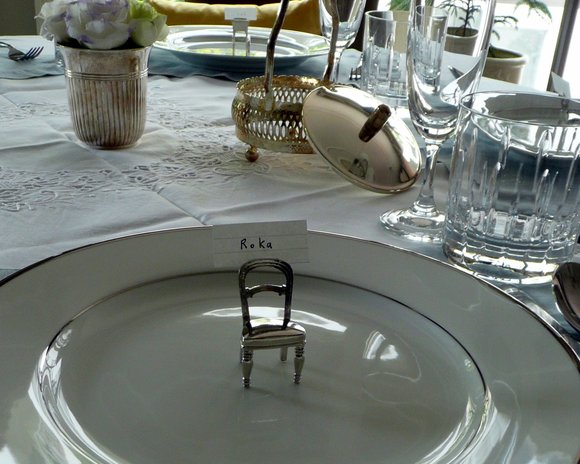 A quick picture before eating.  From left to right: me, Roka, Doug, Ken and Tawn. 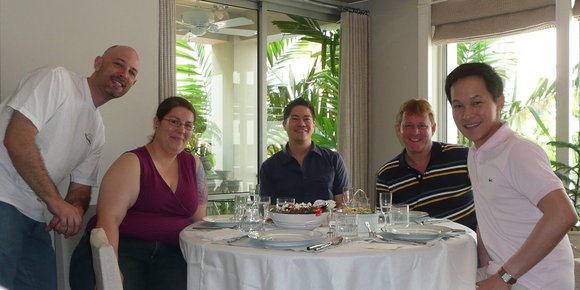 Another Sunday at Chris and Tawn’s…