This morning I received the following email.  It is so sinophobic as to remind me of the “yellow peril” scare of the laste 1800s and early 1900s.  It left me fuming and so I spent two hours composing a response, which is printed following it.  Please note that I added the images to this post; they were not part of the original email message. 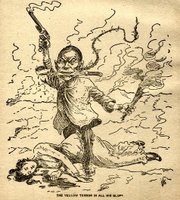 Do you want to send a message to China?  Are we Americans as dumb as we appear or is it that we just do not think?  While the Chinese, knowingly and intentionally, export inferior products and dangerous toys and goods to be sold in American markets, the media wrings its hands and criticizes the Bush Administration for perceived errors. Yet 70% of Americans believe that the trading privileges afforded to the Chinese should be suspended. Well, duh..why do you need the government to suspend trading privileges?

Simply look on the bottom of every product you buy, and if it says ‘Made in China’ or ‘PRC’ (and that now includes Hong Kong), simply choose another product or none at all.  You will be amazed at how dependent you are on Chinese products, however you will be equally amazed at what you can do without.  Who needs plastic eggs to celebrate Easter?

If you must have eggs, use real ones and benefit some American  farmer. Easter is just an example, the point is.. do not wait for the government to act.  Just go ahead and assume control on your own. 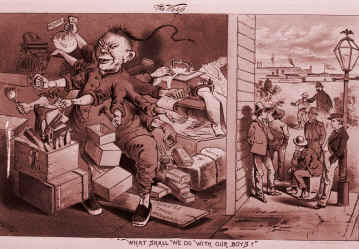 If 200 million Americans refuse to buy just $20 each of Chinese goods, that’s a billion dollar trade imbalance resolved in our favor…fast!! The downside? Some American businesses will feel a temporary pinch from having foreign stockpiles of inventory. ** Downside??

The solution ?  Let’s give them fair warning and send our own message. We  will not implement this UNTIL June 4, and we will only continue it until  July 4.  That is only one month of trading losses, but it will hit the  Chinese for 1/12th of the total, or 8%, of their American exports. Then they will at  least have to ask themselves if the benefits of their arrogance and lawlessness were worth it.

Here’s is my response:

A response to the anonymous author of the “Message to China” 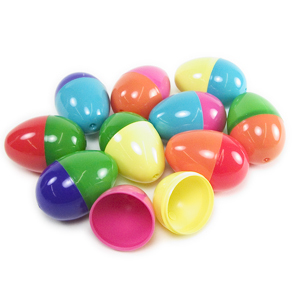 I was forwarded an email (I’m sure it has been forwarded many times before I received it) that suggested that we should engage in a month-long boycott of $20 each of Chinese-made products in order to “send a message” about their “arrogance and illegality”.  Here is my response:
Painting with a broad brush
For starters, the original author talks about “China” and “the Chinese” and their “arrogance and illegality” as if they were one monolithic group, much in the same way that Islamic fundamentalists talk about “America” and “Americans” as if they were of one single mind.  It is a bit of mental laziness to confuse the actions of individual companies or oversight by specific corrupt government officials with the entire nation or populace.

As an American living overseas, am I personally to be blamed for George Bush’s blundered war in Iraq just because I’m American?  Does every computer running Microsoft Windows around the world represent “America” monopolistically flooding foreign markets just because it is an American-based company?  Does the spread of McDonald’s around the globe and the ensuing obesity epidemic that seems to follow in its footsteps represent America “knowingly and intentionally exporting inferior products” and unhealthy goods?  Of course the answer is no, because individual people and individual companies should not be conflated with a country as a whole.

(Speaking of corruption, did you know that the Chinese government actually executes government officials who are implicated in bribe-taking and corruption scandals?  I’d argue that that sends a much stronger message to their leaders to crack down on problems like lead in paint than anything the American government does.  Two years in a country club prison for a corrupt politician or a bullet in the back of the head?  Which is the real deterrent?)
Pennies on the dollar
Second, the premise that boycotting Chinese-produced goods has a direct effect on the trade imbalance and only on “the Chinese” is detached from reality.  Let’s use the example of plastic Easter eggs that the original author used.  Discounting the only valid point that the author made, which is asking why you need to buy plastic eggs in the first place, let’s say the batch of plastic eggs cost you $5 at your local Wal-Mart.
What percentage of that $5 do you think actually is paid to the Chinese company that produced the eggs?  At best, maybe $0.05.
Consider the entire production chain: there are costs of the raw materials, packaging costs, costs for employees and transportation costs, and that’s before the eggs even reach the US.  Once they are here, there are further transportation costs, the fixed costs associated with building and maintaining the store itself, property and sales taxes associated with the store and this sale, and wages and benefits (minimal, in Wal-Mart’s case).   The dollars you boycott aren’t going to magically drop to the bottom line of the trade imbalance.  At best, a few pennies on each dollar might. 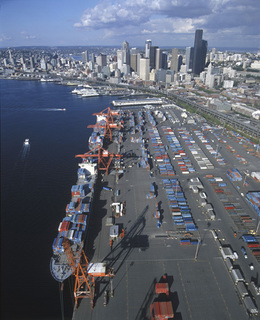 The global employment chain
Consider also that the entire chain described above results in people having jobs at each step.  Value is added at each step, infusing each local and national economy with more money and creating jobs.  From the employees in the petroleum industry extracting and processing oil (plastic is a petroleum product), to those at the manufacturing facility that makes the plastic pellets that are sold to the plastic egg factory, to the workers at the plastic egg factory to the truckers, port workers, cargo ship crew, port workers and truckers in the US, and the Wal-Mart employees (not to mention government employees such as customs workers, highway patrol officers staffing truck weigh stations, and workers processing corporate tax payments), there is an entire chain of employment across the globe created by global trade.
Finally, the author’s suggestion that buying real eggs instead of plastic ones will “benefit some American farmer” largely ignores the realities of American agribusiness.  The eggs you buy from your local chain grocery store (or the grocery section of your Wal-Mart) are most likely not raised by “Farmer John” who has the large red barn about two miles outside of town.  Most likely, they are raised by one of the large conglomerates that control most of America’s food production, the same ones that are receiving the vast majority and a disproportionate share of the government subsidies that were just approved in the Farm Bill.  If only your Easter egg purchase actually helped some independent family farmer!
Possible solutions
So what can we do, then?  It is understandable to be frustrated by the trade deficit and to be upset about dangerous products being imported into the country.  There’s nothing wrong with wanting to buy American and if you’re serious about the idea, then by all means do it.  Don’t wait for a boycott and don’t limit yourself to $20 a month.  Beyond that, though, how can we have a real impact?  Here are a few thoughts:
First, consider why you’re buying at all.  To his or her credit, the original author did make the briefest of suggestions (“…or none at all.”) to this effect.  Whether those plastic Easter eggs were made in China or the US, are they something you really need to have?  In the past several generations we’ve become a population that is tremendously consumerist, buying things that we don’t need and building up large personal and national debts.  For the first time since the Great Depression, Americans as a whole have a negative savings rate.  On top of it, our government has a national debt of $9.39 trillion dollars!  If you really want to start making an impact, take that $20 you were going to boycott Chinese-made products with, don’t spend it at all and instead put it in a savings account or invest it.
Second, if you are going to buy, buy quality instead of quantity.  We buy more and more things of lower and lower quality.  The things we  buy aren’t necessarily very good for the environment (plastic won’t biodegrade anytime this millennium) and are increasingly designed to be disposed of instead of lasting.  Somewhere in your parents’ attic there are probably toys from your childhood that are still in working order.  How many of your children’s toys will last that long?   You can lower the trade imbalance (and have a positive benefit on the world as a whole and your pocket book) by buying fewer things but things that will last a long time. 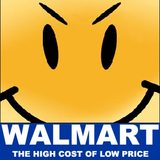 Third, consider the impact of where you buy.  Tens of millions of Americans do their shopping at stores like Wal-Mart, that pay low wages and provide minimal benefits.  Sure, they provide low prices but they do so on the backs of their employees, not just because they are selling a lot of inexpensive foreign-made goods.  In addition to buying less and buying things of higher quality, spend your money with stores that pay their employees a living wage and provide them with reasonable healthcare benefits.  Remember, these “employees” are our fellow citizens, our friends, neighbors, and even family members.
Finally, let’s turn off the TV.  Not only is excess TV watching contributing to record levels of obesity, but the “news” we’re watching isn’t news at all, it is punditry.  Whether Karl Rove on Fox or Lou Dobbs on CNN, we’re watching talking heads spout nonsense that is lowering (or eliminating) any intelligent, thoughtful discourse on important issues such as global trade and foreign relations.  It is the same sort of mind-numbing spin that the original author of the email engages in, proposing an ineffectual and transparently xenophobic boycott to address a nuanced and complex issue.