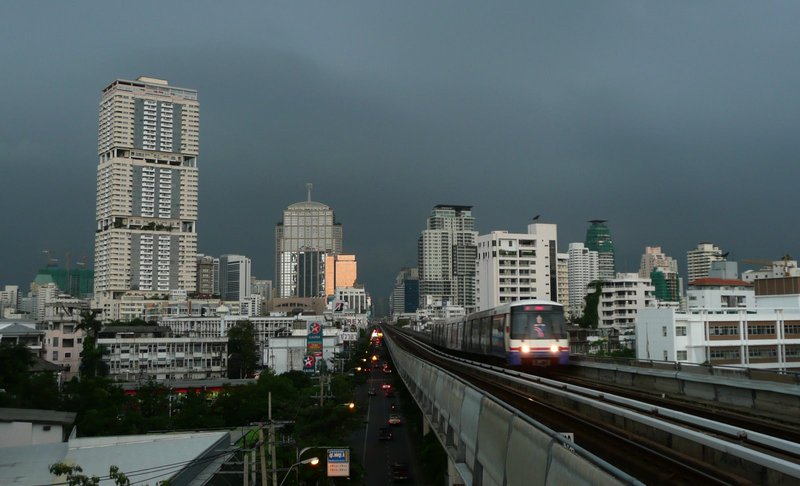 Above: Not quite 5:00 in the afternoon and yet the sky is dark as a storm consumes the central part of downtown Khrungthep.  Picture taken from the Thong Lo station looking northwest. 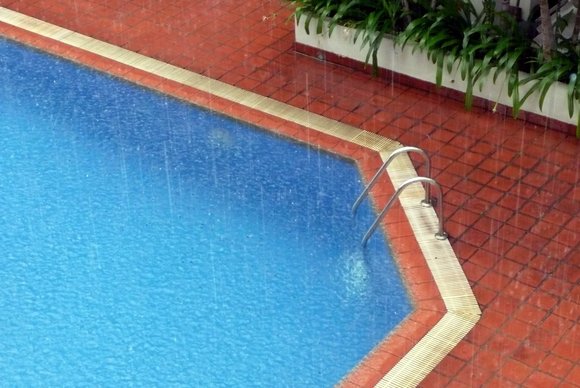 According to the guides, charts and historical patterns, we’re a little bit ahead of the normal rainfall for May, which as I understand it, marks the first of the two monsoons (the other is in September, the wettest month by far).  For the better part of the past two weeks we’ve had daily rains.  Not just the late afternoon thunderstorms mind you, but drizzly, temperamental rains that come at all hours of the day and night.  Our power cut out twice yesterday evening and once again while we slept last night, waking us up a while later when the unconditioned room became too warm because the air conditioner had been reset by the power interruption.

The rains are okay by me as they keep the temperatures cooler, especially with the dark clouds blocking out the tropical sun.  Sure, you have to plan a bit so you don’t get caught on the back of a motorsai without protection, as Tawn did on his way home this evening.  Actually, he had protection, but he sacrificed his sweater to wrap his bag.

I encountered this funny advertisement on, of all things, airliners.net.  It is for a British travel website called lastminute.com and as far as I can tell from a bit of research, the advertisement is exactly what it appears to be: a Candid Camera-type moment in which a group of professional actors conduct an ad hoc musical performance in the waiting area at London’s Stansted Airport to the surprise and amusement of those in the lounge.

From my perspective, this is pretty much the story of my life: breaking out in spontaneous song to drive my personal story line forward.  Does that happen to you?

10 thoughts on “Spontaneous Singing in the Boarding Area”