Over the last week we’ve had a trio of visitors in town from New York City: Malcolm and Sally and their friend Biing.  Malcolm is a film maker whom I met working about six years ago at the SF International Asian American Film Festival.  We’ve stayed in touch since then and I’m very glad they had the opportunity to come visit.

Their friend Biing arrived first, two days ahead of them.  Malcolm put us in touch and he was able to join us last Saturday at Pune’s farewell party.  Having never met Biing before, I was initially concerned whether he’d feel comfortable at a dinner party that was half women and the other half gay men.  Within thirty seconds after meeting him I realized my concerns were misplaced.

Pune decided to cook for us, as she’ll be heading off to her new life in Germany soon and won’t have the opportunity to cook for us anymore.  The menu was Thai: spicy ground pork dip (with pita bread, the only non-Thai item), rice noodle nests and chicken red curry.  Tasty!

Below: Pune toasts the pita bread; Tam goofs around. 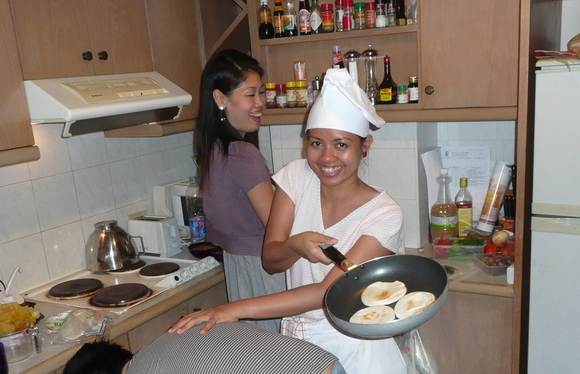 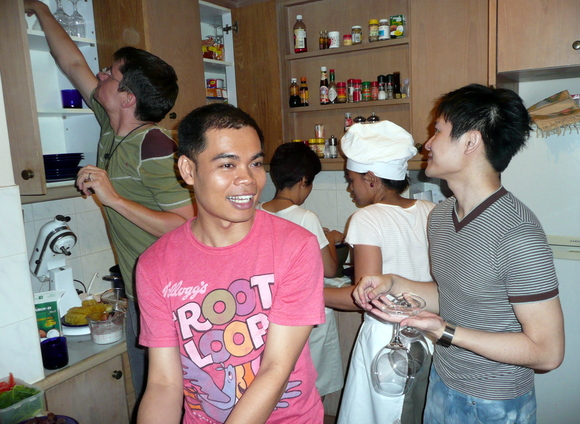 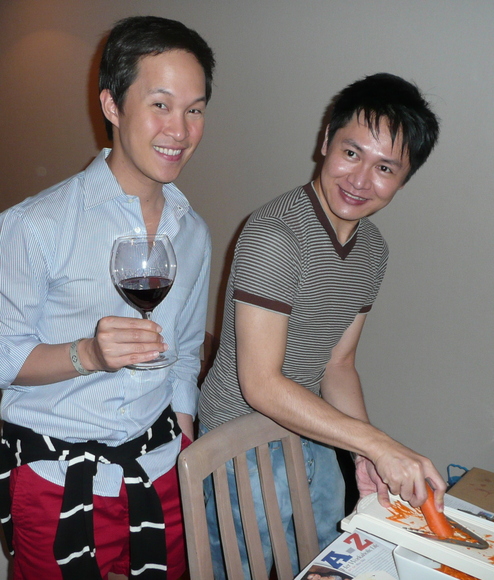 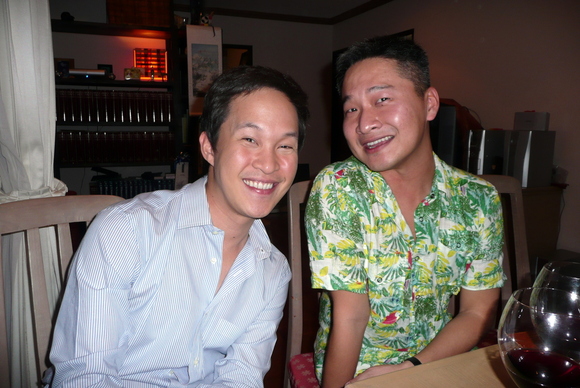 Above: Tawn and Bing.  Below: Pune poses with the food, Tam, and Frederic. 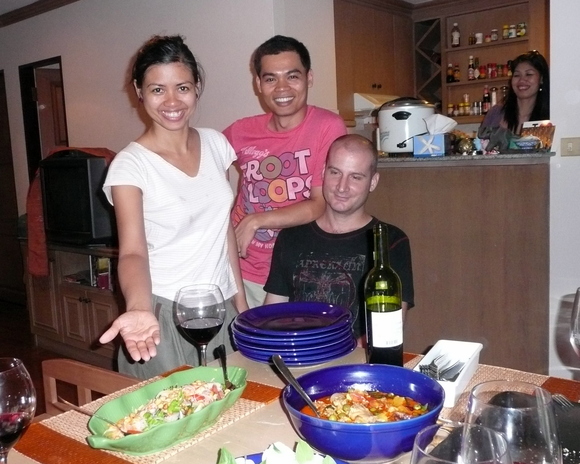 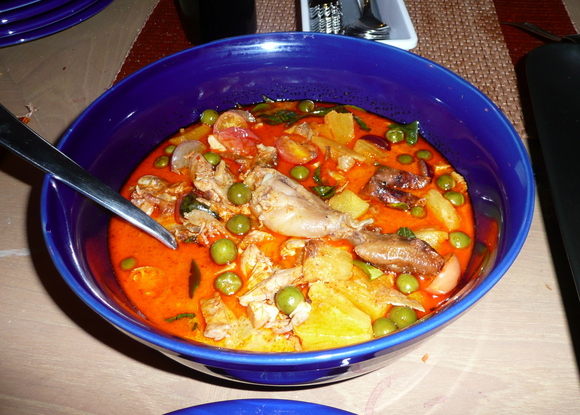 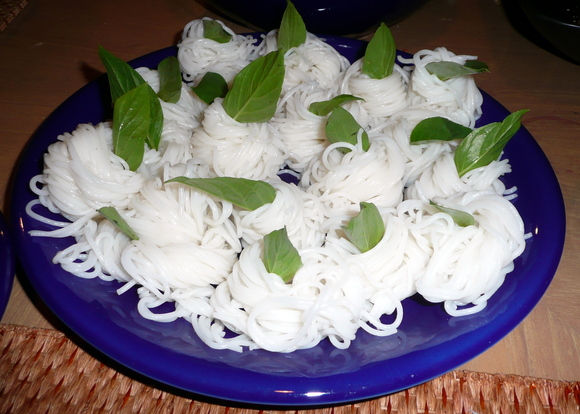 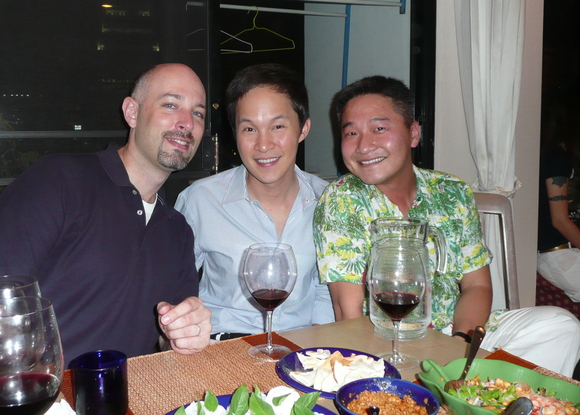 Above: Me, Tawn and Biing.

It made for a very fun Saturday evening and, thankfully, one that wasn’t too late.  Sunday morning we were up at a reasonable hour and picked up Biing at his hotel for a trip to the Jatujak Weekend Market.  We started on the food side of the market, technically another market altogether as it is open seven days a week. 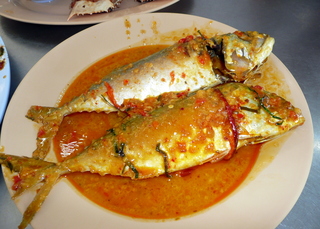 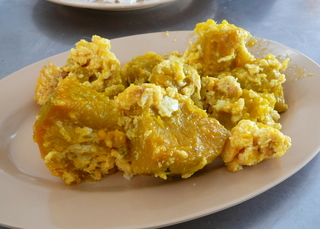 We bought a range of tasty food including a mackerel in curry and a stir-fried pumpkin and egg dish, above.

Below, Biing enjoys the food. 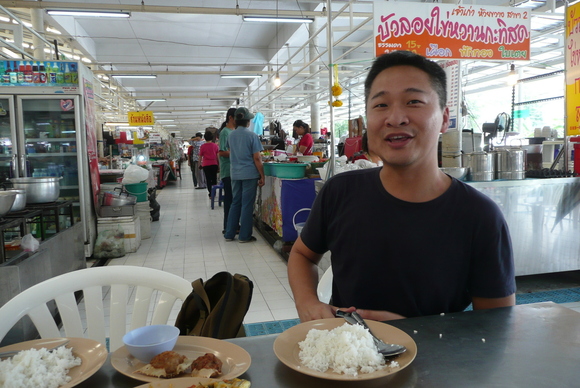 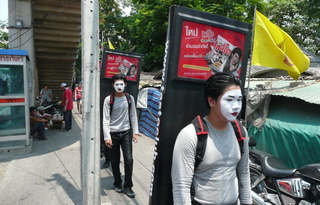 Right, outside the market we saw a group of young men in painted faces out to advertise some product.  Don’t know if they were looking so down because of the weather or because of the product they were advertising, but they were definitely sad clowns. 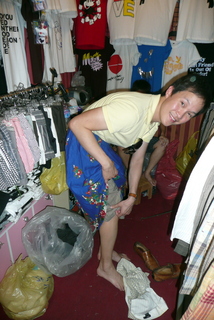 Tawn tried on some shorts at a tiny vendor’s stall in the market.  There was no changing room or even a changing corner, so the vendor had an elastic-waist skirt you could wear to cover yourself while slipping shorts on and off.  At one point Tawn almost forgot he hadn’t put his shorts back on and started to remove the skirt!

During their time here, I was able to meet up with Malcolm, Sally and Biing several times.  Finally, Wednesday evening Kobfa, Tawn and I joined them for dinner at Tae Ling Pling then met up with Vic on top of the Banyan Tree hotel for drinks. 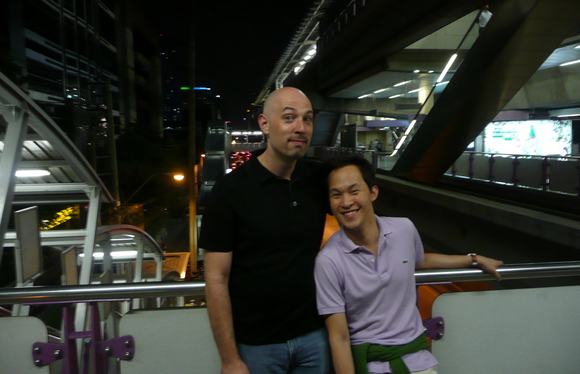 Above: Tawn and I wait at Surasak station for our guests to arrive.  Below: On top of the Banyan Tree Hotel from left to right, Biing, Vic, Tawn, Kobfa, Malcolm and Sally. 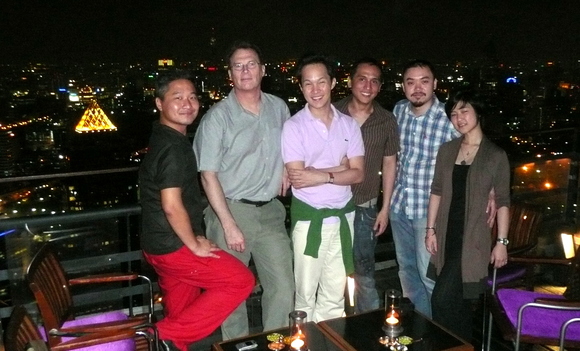 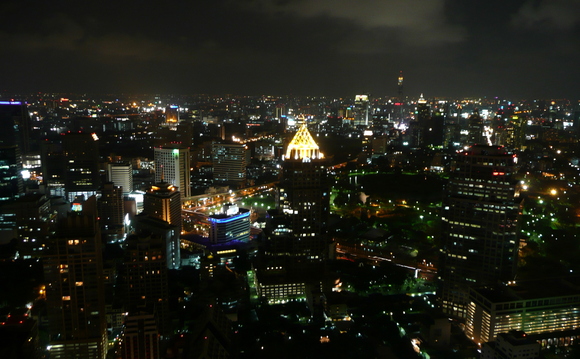 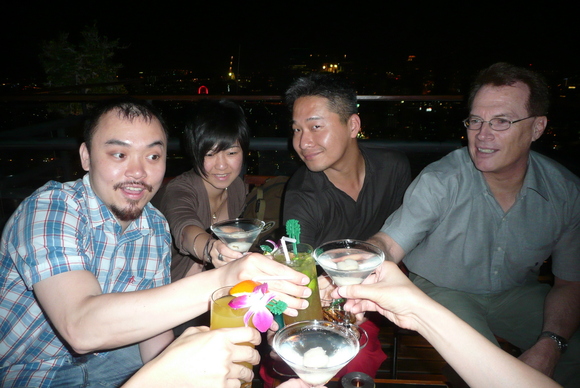 Between work and my visitors, I haven’t had as much time to update my blog, Facebook, etc.  But that’s okay as it was a fun time.

4 thoughts on “Visitors from NY”