In the musical The Boy from Oz, Hugh Jackman (playing Peter Allen), opens the show singing a song titled “The Lives of Me”.

“I come in many colors, assorted shapes and sizes,

can adapt to your demands.

And if you smile at someone then I’ll just become that one,

and throw in all the others for free.

All the lives of me.” 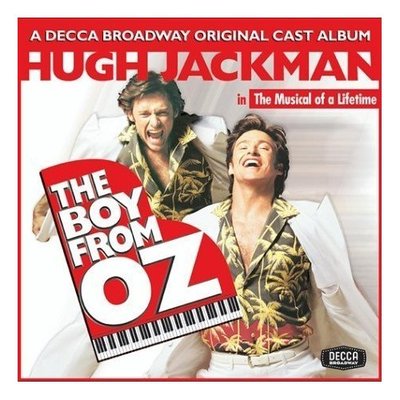 Sometimes I feel that way about my blog.  This is probably a feeling common to many bloggers.  You start out writing the blog for one reason or another and over time, as it attracts more readers, it is easy to start feeling like there are different blogs being written.

There’s the food blog, the travel blog, the Thai cultural blog, the gay long term relationship blog, the airline enthusiast blog, the random quotes from showtunes blog… you get the idea.

Just like the character of Peter Allen in the musical, I feel like if you enjoy one particular blog, my blog will become that one and throw in all the others for free.

The blog started out because I knew I would be moving to Thailand and wanted to create a means by which my family and friends could stay in touch with what’s happening in my life.  Many of those “target audience” member do read regularly although I’m always a little amazed at friends who, when we trade emails, express how out of touch with me they feel.  No reason to be out of touch… you can get a pretty exhaustive recap just by reading my blog.

Along the way, I’ve assembled a fascinating and rewarding collection of readers.  Truly, some very interesting and thoughtful people whose acquaintance I’m very glad to have made.  I just hope that you weren’t misled about what this blog was and feel subsequently disappointed that there aren’t enough entries about food, travel, Thai culture, airplanes, showtunes, or whatever it was that drew you to the blog in the first place.

Doing a PR Polish for Ble

Tawn recruited me on Friday morning to help our designer, Ble.  In advance of a feature article on him in the Bangkok Post newspaper, Ble (pronounced “bun”), was sent a list of interview questions.  When he showed Tawn his responses, Tawn shook his head and asked, tactfully, how he could be such a good designer and yet such a poor self-publicist. 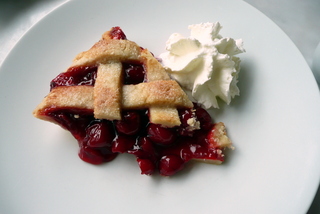 I was called in to polish his responses so bicycled over to his store at noon on Friday.  We had lunch at a cute little place on Sukhumvit 16 called Kuppa, a cozy place that reminds me of a restaurant I’d expect to find in the San Francisco Bay Area.  More about it on a future visit but here’s a picture of their tasty cherry pie, left.

The lunch proved to be a very good opportunity to get to know Ble better.  We’ve never spent any time, just the two of us.  Tawn has known Ble for several years and we’ve socialized, but never had two hours of solo conversation.  In the course of essentially re-interviewing him, I learned a lot about what drew him to design in the first place.  I tried to polish the answers to convey certain themes.  Here’s a selection: 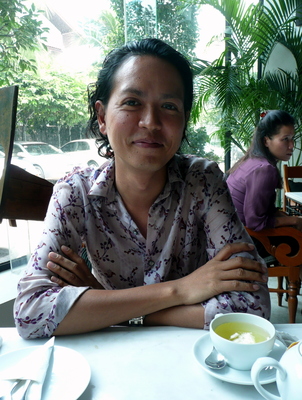 How did you become involved in Modern Thai Living?

As a child, my interest in design was already evident.  I would spend hours drawing; I was fascinated by textures and textiles, fabrics and furniture.  My playtime was spent exploring the markets.  It was there – especially at Chatuchak – that my love for Modern Thai Living was cultivated.

What are your extravagances?

When I’m abroad exploring for beautiful objects for my clients and my stores, I have only one extravagance: no matter how remote the town, no matter how hot or dusty the markets I’ve searched in, I must conclude my day with a satisfying meal at a cozy, comfortable restaurant.

What advice would you give visitors to Bangkok?

Beyond the famous tourist sights, beyond the temples and the nightlife, Bangkok is a city full of hidden treasures.  Every local has a favorite restaurant, a favorite shop that is his or her “hidden gem”.  Make every effort to meet as many locals as you can and as you get to know them, they’ll share these treasures with you.

Hopefully that doesn’t sound too silly.  What do you think?  Hopefully the prose is a beautiful as his design work.

A House in the Country

Sukhumvit Road in modern times is very much a main artery in the City of Angels.  It might be hard to imagine that not that many decades ago, the street was lined with two small khlongs and rows of trees.  Well-heeled residents bought land along Sukhumvit and in the sois that branch off it in order to have country homes where they could escape on the weekends.

Of course, nowadays the idea of a home along Sukhumvit being a country home seems downright absurd.  But amidst the condo developments, hotels, and shopping centers you can still find plenty of examples of the beautiful houses built in the distinctive styles of the 1950s and 1960s on gated compounds that feature generous gardens and a peaceful respite from the surrounding city.

Below are two photos of one of these houses.  Facing Sukhumvit proper between sois 34 and 36, this house is a lovely example of 1960s tropical architecture.  To the east of the building is a new condo complex that will tower some 30 stories above it, destroying whatever privacy the residents enjoyed.  One day, eventually, the family or their heirs will finally cave in and sell the property to developers. 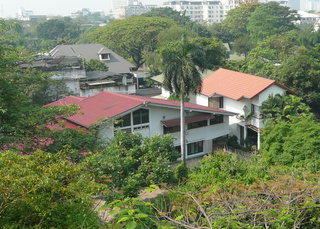 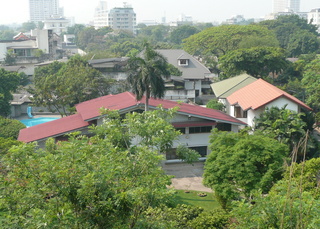 These days, the homes being built in the countryside are large developments, gated communities in which several hundred cookie-cutter homes are squeezed together on old rice paddies.  No gardens of any appreciable size, no cross-ventilation, and a horrible commute into town.  It is times like these when I wonder whether it is really appropriate to use the western definition of the word to measure Thailand’s “progress”, for this relentless suburbanization of the city hardly seems like progress.  More like degeneration. 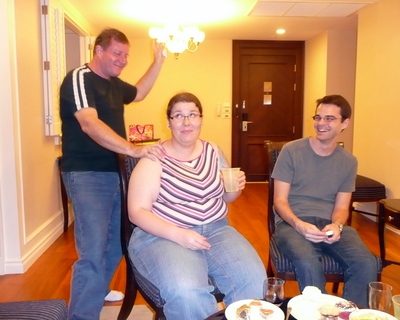 One constant in your life if you’re an expat is the coming and going, the constant ebb and flow, of other expats.  Francois left last week, gone home for two months to work.  Russ will leave soon for a few weeks.  Ken will be out of town quite a bit over the next two months, to say nothing of Markus, who is away more than he is here.  Bill’s turn is next as he’ll be heading back to Florida on Tuesday for an indefinite length of time although with a desire to return just as soon as he can.

To celebrate his departure – or perhaps just to finish his collection of whisky – he threw a party on Saturday night.  It was a collection of the usual suspects leading to the usual conversations and silliness.  Right, Ken dances for Roka and Russ looks on.

Below, Tawn and Chai 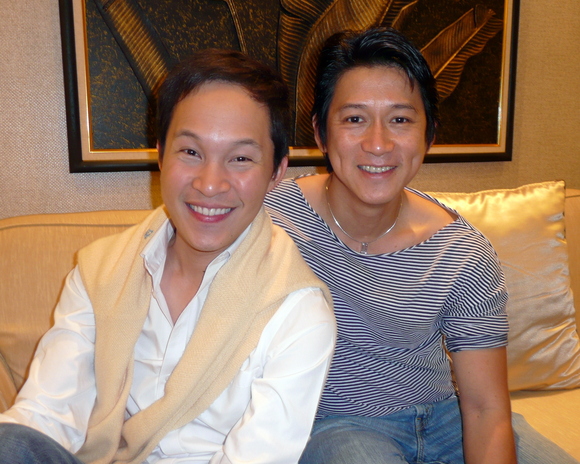 Call me crazy, but if you throw a party beginning at 7:30 in the evening, wouldn’t the normal expectation be that you have at least a few real food items on the table?  We ended up just with chips, dips, and other assorted junk food.  Worse yet, Tawn and I contributed to it!  We brought cupcakes.  I know, I know… chicken satay would have been a much better contribution. 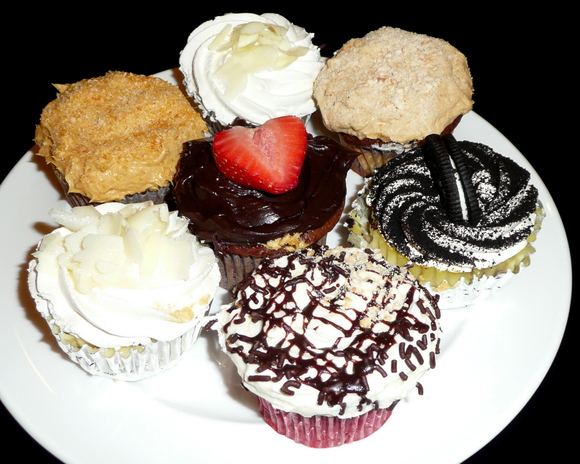 Yet, there was an ulterior motive.  I’ll let you in on the conceit:

My elder niece turns five at the end of the month.  For her birthday gift, I used Shutterfly to make a customized picture book telling the story of her trip to San Francisco last autumn with her uncles to attend a family wedding.  It is 27 pages with pictures and a compelling story.  On the final page, I wanted a funny picture of me and Tawn wishing her a happy birthday. 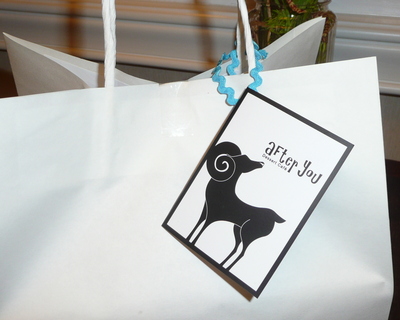 I settled on the idea of buying some cupcakes and staging a photo in which we ostensibly were presenting the cupcakes to my niece, but instead I’d be sneaking a bite of one while Tawn scolded me.  We did a number of shots with Bill doing the picture-taking.

Wanting some nice cupcakes for our friends, we went to After You, a small shop in J Avenue on Thong Lor.  After You has really cute packaging, right, and a very clever name.

You see, there is an upscale Japanese barbecue restaurant two doors down called Yuu and, like most Japanese restaurants, it doesn’t really offer much in the way of a dessert menu.  I understand that in Japan, if you want dessert you go to a dessert shop afterwards.  So after eating dinner at Yuu, if you want something sweet to finish the night you go to After You.  Get it?  Clever, huh?

Anyhow, here’s the picture we settled on. 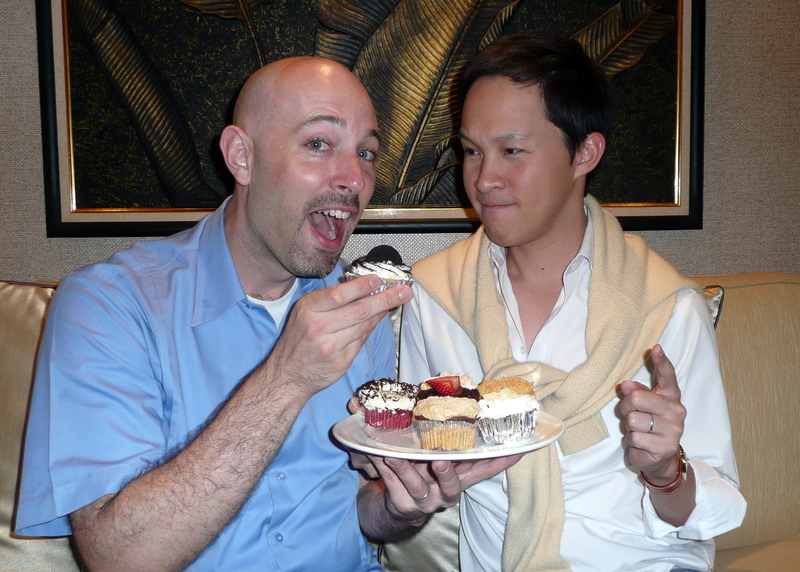