Friday evening I pumped up my bicycle’s tires, changed the batteries in my head and tail lights, strapped on my helmet and started pedaling down Sukhumvit Road towards Siam Square.  The last Friday of the month is payday in Thailand, jokingly called a national holiday.  The roads are packed more than usual as everyone goes out to celebrate having money again. 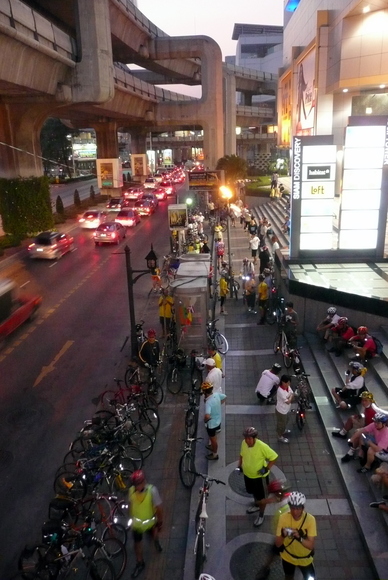 It took me nearly thirty minutes to ride the six kilometers, weaving through traffic, riding a few very short stretches (slowly!) on the sidewalk, and ultimately arriving at Siam Discovery Centre just before 6:30.  There I found more than a hundred bicycles parked on the sidewalk, a hundred bicyclists milling about, with more arriving every minute.

Not recognizing anyone, I stood about taking in the scene.  As has happened before with Thai bicycling events, the locals are very friendly.  The ones less confident about their English just smile and nod, and within a couple of minutes I was engaged in conversation with a married couple.  The wife had done her undergraduate degree in Ann Arbor, Michigan, while the husband had been a high school exchange student in – are you ready for this? – Moscow, Idaho.

Oh, and especially interesting, the couple cornered the reporter from the independent TV station (public broadcasting) and had her interview me – in Thai!  Talk about a challenge.  Don’t know if I made the evening news or not.

About 6:45 the now 200+ people saddled up and we headed out on our ride through the city.  The route was less than 20 kilometers and with such a large group we were not moving very fast, covering the route in about two hours.

Throughout the ride I continued to make new friends, some farang who joined the group and some Thais.  There really is a vibrant bicycling community here, which you wouldn’t necessarily realize.

This was the first time a Critical Mass ride has been undertaken in Bangkok and it had its own Thai flavor, combined with just some “inexperience” in what elements have made CM rides successful in other cities.

Unlike the leaderless rides at other CMs where the people at the front of the group sort of create the group’s direction on an ad hoc basis, this ride had a route map, police had been informed, and there was one man at the front wearing his bambo pith helmet – I believe he is the founder of the Thai Cycling Club – who was leading the way.

Also, there were some things that could have been done to keep the group together.  We were regularly split up by traffic lights and lost much of the group in the first twenty minutes.  Had there been some “safety monitors” who would block traffic in an intersection and let the group get through, it would have been a bit more effective.

But, hey, it was the first time and there isn’t a right or wrong way to do a ride.  Thai cyclists can make it their own.

One realization I had, though, is that non-cyclists have a lot of misconceptions about bicycling in this city.  “The traffic!” they say, ignoring the fact that the traffic largely isn’t moving and that on a bicycle, it is easy to get around larger vehicles stuck in a jam.  “The heat!” they say, fogetting that when you are riding, you create your own cooling breeze.  “The danger!” they say, not realizing that Thai drivers are the most patient, accommodating, and polite anywhere in the world.  Not a honked horn, not a waved fist, not a foul word.

Can’t wait until next month’s ride!