It is a sunny and surprisingly cool Friday morning.  As of 8:30 it was 25 C / 77 F, which for late February really is a cool start for us.  As a very pink sun crawled above the hazy horizon, I drove Tawn to the airport where he is meeting some of his colleagues for a weekend business trip in Bali.  Not a bad place to have a business trip, if you ask me.

This week has been mostly about some work projects, one in particular that has taken a large amount of time and as it involves a lot of typing and document formatting, is threatening to give me carpal tunnel syndrome.  To spare my wrists, I did take a few breaks and got out and about.  Such interesting things to see when you’re exploring on foot.

A Tale of Narrow Sois 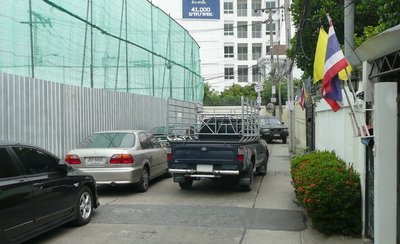 As nearly all of the city was once rice paddies, the narrow khlong – canals – eventually were paved over and made into streets.  To this day, these small streets (alleys?) called soi are still narrow and twist and turn, making a rabbit’s warren of choke points for vehicular traffic.  Just in the course of two outings I observed several nose-to-nose confrontations between vehicles that had no room to pass.

Right, in Lad Prao Soi 19 there is a dog leg in the middle of the dead-end soi, construction of a new condo on one side, and cars parked all along the soi.  The dog leg is sharp and, for drivers, makes for two consecutive blind corners.  As I was walking into the soi there were two vehicles coming in that encountered two vehicles coming out.  Interestingly, neither group backed up to a suitably wide passing spot.  Instead, they inched past each other in a very slow and intricate dance right at the corner, missing each other by maybe the width of a hand.  No horns, 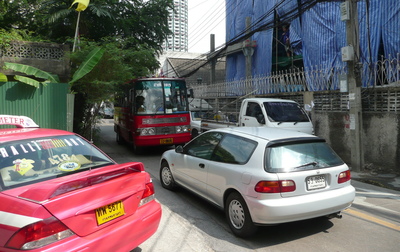 Things were not as equal when the red Thong Lor shuttle bus, which loops up and down the street connecting Khlong San Saeb with Sukhumvit Road, encountered oncoming cars in Thong Lor Soi 1, left.

The heavy duty Mercedes bus ended up the victor, forcing the taxi to pull into a restaurant’s car park (left side of picture) and the Honda Jazz and several cars behind it to back up into Sukhumvit 53, about ten meters behind.  Still no horn honking but the bus driver wasn’t being very magnanimous about his victory.

Lad Prao is a long, wide road on the north side of the city, stretching from the area around the Chatuchak Weekend Marked and Phaholyothin Road junction all the way across town to Ramkamhaeng Road in the northeastern quadrant of the city.  Francois bought a condo there in a new lowrise development (with the blue banner on the side of it in the first picture above) on Lad Prao Soi 19.  It is convenient, all of a three-minute walk from the subway station and then a eight-stop ride to Sukhumvit. 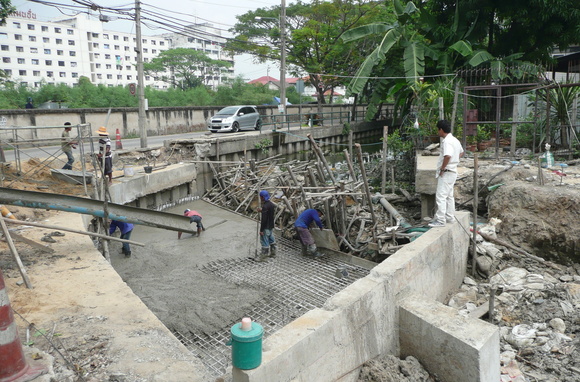 Walking around the neighborhood, I came to an intersection around Soi 7 where some interesting construction work is underway.

A khlong flows under the soi right where it enters the main street.  It appears that a proper drainage channel is being built under the soi.  What I found fascinating is the dam being used to hold back the khlong while construction progresses, which is made of sticks and stones.  Additionally, it looks like the worker in the pink shirt, the one leveling the freshly poured concrete, is in there barefoot. 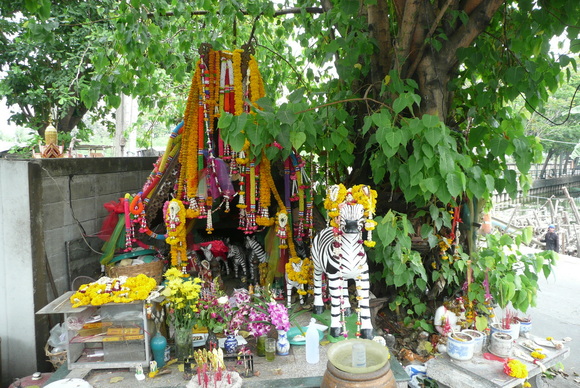 At the same corner there is an old, gnarled tree right at the intersection.  Underneath it has been built a shrine including a spirit house (almost completely covered in garlands), a herd of zebra, and fresh offerings of flowers, incense and drinks.

While I know the tradition of spirit houses grows out of animist beliefs that have mixed with Brahman and Hindu ones over the years, I’m still curious about this particular shrine.  Was this the shrine set up for a larger plot of land that has since been subdivided and developed?  Even though the country is 95%+ Theravada Buddhist, those beliefs are overlaid onto many other ones, forming an interesting collage of beliefs.  As it has been explained to me, you never know for certain which beliefs are the right ones so why not be safe by subscribing to all of them?  Very pragmatic.  Very Thai. 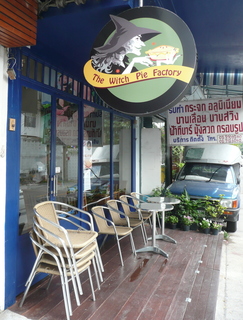 Just recently a new, small restaurant opened on Thong Lor 1.  The Witch Pie Factory is associated with the Witch’s Tavern, a pub further down Thong Lor.  I am assuming that this is in fact the place they make the pies served at the pub and decided to make the most of the space by including a retail and restaurant front end there, too.

It is a cute place with a bright blue exterior and room for a little cafe-style seating out front.  Since it sits right on the soi that had the bus-car confrontation mentioned above, I’m not sure I’d want to be sitting outdoors watching that while eating my pie. 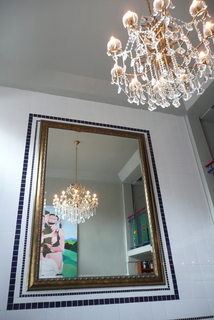 On Wednesday, Vic, Ken and Francois joined me for lunch there.  Ken wittily referenced Sweeney Todd and asked whether there was a barber shop upstairs.  Without a doubt, these are the British-style pies we’re talking about: individual meat pies that, along with a small side salad are meant to make a meal.

The interior really is cute, too.  The walls are tiled with large, tidy white tiles with dark blue accents that remind me of bagel shops in Melbourne.  There is a large mirror on one wall, reflecting the elegant and wholly out of place chandelier and an avantgarde painting on the opposing wall.

There is a loft area that has comfortable chairs, a cozy place for a spot of tea and a slice of something sweeter for dessert.  The downstairs has a long counter and then a half-dozen rustic looking wood tables and benches.  The fresh baked pied are neatly arranged on the marble counter under glass and the selections include several types of quiche and Thai inspired pies (Massaman beef curry, anyone?) in addition to the more traditional chicken and mushroom, and pork and mashed peas pies. 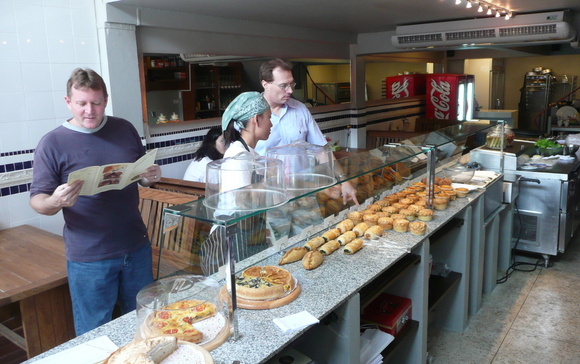 Above: Ken reviews the menu while Vic discusses his choices with one of the friendly workers. 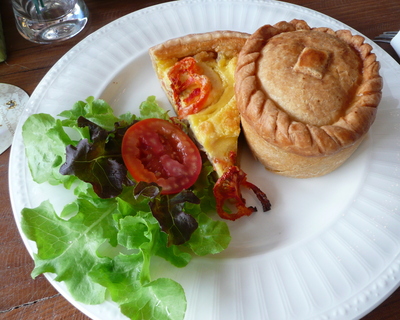 I decided to try the chicken and mushroom pie along with a slice of the tomato quiche.  Both were very tasty and the salad, while a little skimpy, was fresh and of good quality.

Given that pie pastry isn’t necessarily the healthiest source of carbohydrates in the world, at least there was a salad at all!

Being in a pie shop, one couldn’t very well not have pie for dessert.  So I tried their coconut cream pie which is made with slices of fresh young coconut meat that had such a refreshing and delicate flavor.

To top it off, the pies are quite reasonably priced.  Including the salad, most pies are only between 70-100 baht.  Pricier than a plate of rice and two sides, but then also harder to find.  Plus the place is so cute, I’ll pay an extra 20 baht just for atmosphere!  No doubt you’ll be able to find me at least once a week at The Witch Pie Factory.

Next entry: how I’ve started swimming every day in order to burn off those pies!

I’m very excited because my Grandfather has recently learned how to attach photos to his weekly email epistles.  This may not sound like a big deal, but I’m impressed that in his 80s, he still tackles new technological challenges.  He’s had a computer for a decade now, recently upgraded to a new Mac, and every week we receive an email that details the goings on of him and my Grandmother.  I can only hope that in 50 years, I’ll be so active and so embracing of new technologies.

So here are the photos of my grandparents with my youngest niece, Ava.  She turns two years old next week. 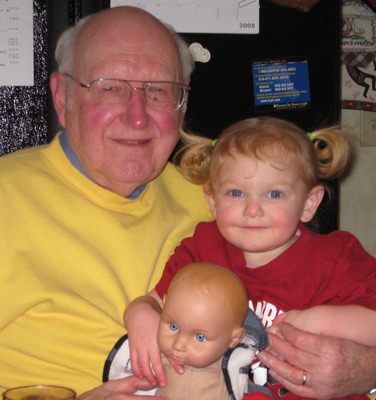 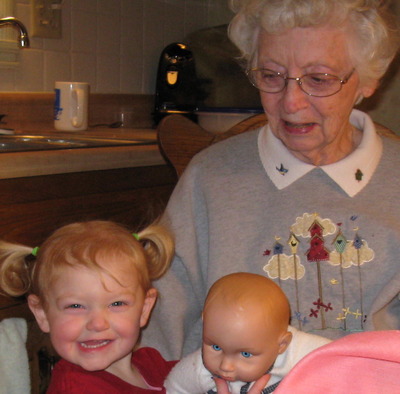 4 thoughts on “Khrungthep on Foot”