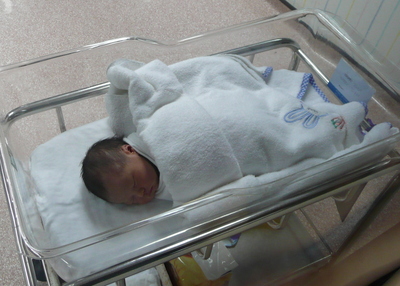 Among Tawn’s close group of friends, about half are straight girls and the other half are gay boys.  Most of the girls have married and as of this week have three of the five have had their first child.

The boys are having an interesting time adjusting to their friends’ procreativity.  Tawn wonders how this will affect the long-term dynamics of the group.

For example, at the hospital on Friday to see Saa and Job’s new baby boy Jae Jae (right)– delivered by c-section on Valentine’s Day – Eddy and Jack were more interested in discussing the latest gossip about the pornographic pictures portraying Hong Kong superstar Edison Chen while everyone else was talking about the delivery and how long it will take Saa to recover.  Talk about being in different galaxies. 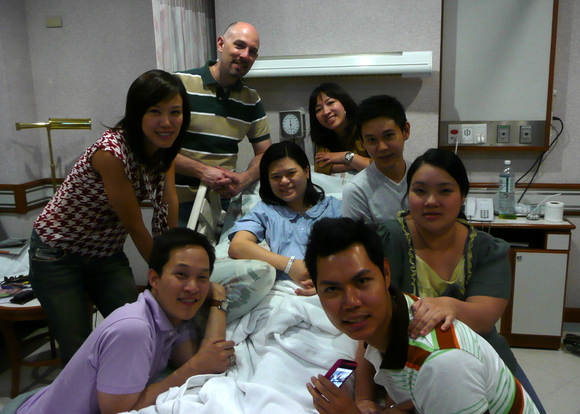 Clockwise from Tawn: Mon, me, Saa (in blue), Dao, Eddy, Jaa, and Jack.  Job (the father) was taking the picture. 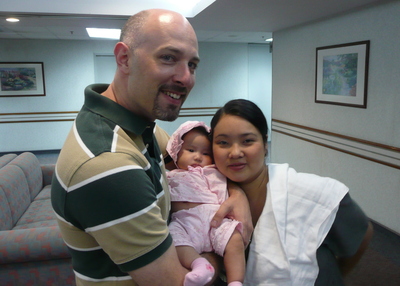 Tawn imagines that we’ll have family get-togethers where he and I will dote on the children.  I imagine that we’ll get together every Saturday and I’ll teach the children English (although all their parents speak it well) and English children’s songs.  Maybe one day we’ll have children of our own to go with theirs.

In addition to Saa’s Valentine’s birth, Jaa and her husband Tuk gave birth to a daughter just a month ago.

On the left is a picture of me with little Nam Ing and her mother Jaa.  She’s so precious and was very low key.  No crying, no fussing, and completely happy to be held by whomever.  She had the hiccups, though, which was immensely funny as they seemed just as strong as an adult’s hiccups, so she bounced whenever she hiccupped.