Fine dining, western-style, is still in its infancy here in Khrungthep.  We have fine dining, alright: som tam, khao chae, tom yum goong, and a host of curries that work miracles on your taste buds.  But western style dining faces a number of traps – ranging from fickle and inexperienced diners who are wary of venturing into unfamiliar culinary ground, to astronomical food costs for fundamental western ingredients that are not available locally, to a service mentality that runs counter to delivering each diner’s dishes at the same time – that can befuddle would-be restauranteurs. 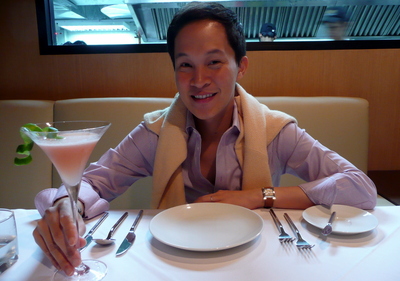 It is against this backdrop that new restaurants open and, sometimes, succeed.  Paradox, owner Adam Bryan-Brown’s new high concept dining, shopping, and art exhibition space, has opened its doors (partially) to see how it will be received by, and how it can shape, Khrungthep’s high-end diners.

In the interest of full disclosure, the meals I had at Paradox on Friday and Saturday were part of a promotion where the four-course set menu (priced at 1250 baht) was offered free to the first twenty reservations each day.  Additional items and gratuities were paid for ourselves.  In talking about the food and restaurant, I’m approaching it from a “What if we had paid for the entire meal ourselves?” perspective. 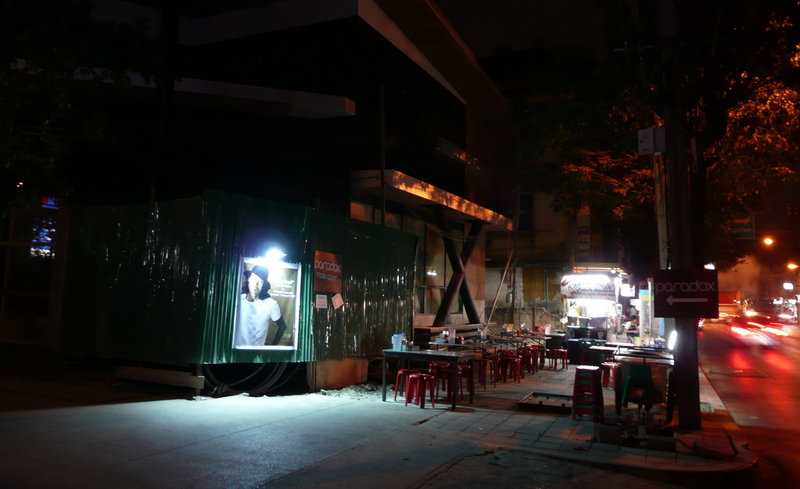 The front half of Paradox’s multi-space building remains under construction, above.  This space, which is scheduled to be a retail store and possibly a wine and jazz bar in the evenings, will do a lot to determine how visible and welcoming Paradox is to passers by on Soi Ekkamai.  In a neighborhood filled with nightclubs and restaurants, having a good face will be important.  As construction continues, Paradox is barely visible, hidden down a driveway near the corner of Soi Ekkamai 17 and fronted by a sidewalk noodle vendor.

It is worth a walk down that driveway, though, as the interior is modern and comfortable.  A future open-air terrace dining area, a second floor private dining room and a quieter dining area behind the kitchen make the restaurant seem smaller than it really is.  There is a large gallery/multi-use space that would lend itself well to many sorts of arts events.  Currently, there is an exhibition of vibrant oil paintings by Vichian Boonmeemak in this space, which calls diners to leave their tables and browse the artwork between courses.

Chef Andrew Cole is at the helm of a large and capable kitchen team, turning out food that Tawn interestingly described as “comfort food”.  Interesting, because while I wouldn’t use that word myself (I picture macaroni and cheese when I hear the words “comfort food”), I understand what he’s getting at.  Cole’s Mediterranean inspired cuisine avoids pretentiousness by preparing fairly conventional ingredients – roast chicken, for example, or spaghetti with scallops – in creative yet grounded ways.  There is no over-reaching with foo-foo additions like a dollop of medjool date paste, a pillow of lima bean foam, or cubes of bay leaf gelatine.

That’s important because all too often in fine dining, there seems to be the urge to turn fusion into confusion: searches for inspired and new flavor combinations turn out messy and misguided.

Let’s take a look at our dinner, which was the same both nights with the exception of the amuse bouche and a pasta dish on Saturday. 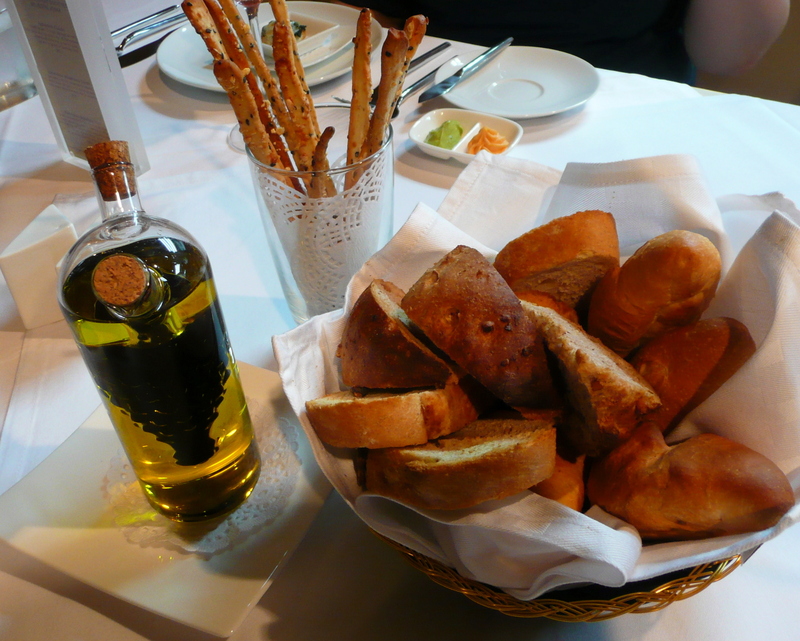 One thing that sets Paradox apart right away is their bread basket, above.  Khrungthep is a city lacking in quality bread and the Paradox bread basket was a welcome start to the meal.  The bread sticks are light and flaky things of beauty and the spinach bread we had on Friday (I think it was a spinach bread… maybe basil bread?) went very well with a tomato spread that accompanied it.

An amuse bouche of spinach au gratin atop toast was very tasty, below.  A plate of a dozen of those along with the soup would have been enough to make a satisfying meal.  Friday’s amuse bouche was a deep-fried half of a baby zucchini served with an olive tapenade and red sauce.  Both were welcoming and familiar ways for the kitchen to greet the diners. 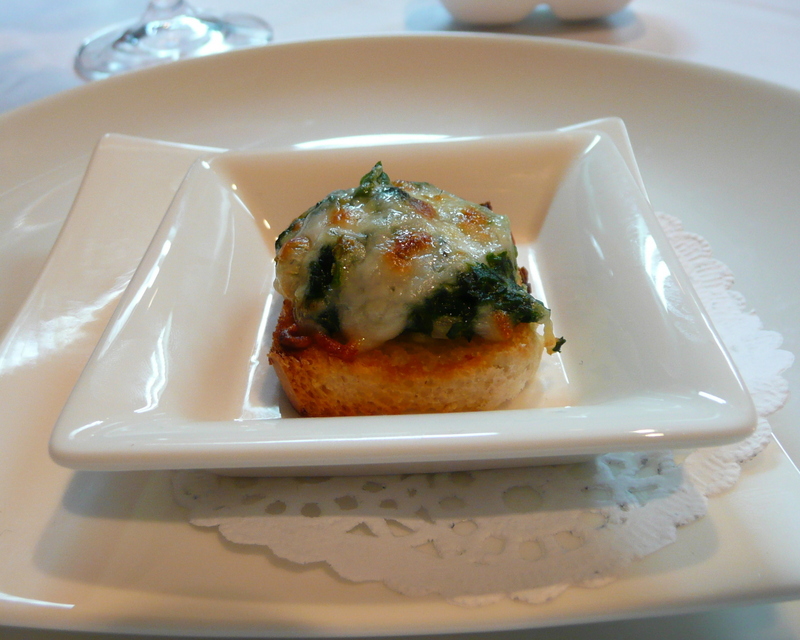 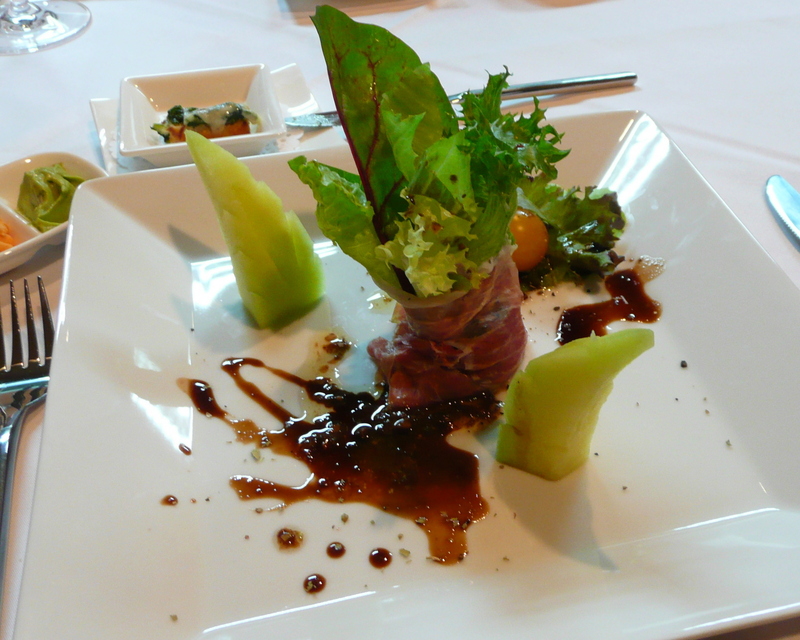 The set menu began with a Parma ham salad, above.  What on the menu could be mistaken for a stodgy and unimaginative start was creatively – and tastily – inverted.  Whereas you would normally expect melon-wrapped ham with a side of greens, the chef instead wrapped the beautiful greens with the ham and balanced the melon on the side.  A couple of perfectly ripened tomatoes and the accompanying balsamic vinegar reduction nicely tied together the flavors while the plate’s arrangement was pleasantly architectural without being silly.

One hit of the menu was the cream of pumpkin soup, below.  Pumpkin has such a wholesome, good-for-you flavor and when it is balanced with just the right amount of cream, it is such a delight to eat that I could subsist on this and nothing more – except for those spinach au gratin amuse bouches, which would go wonderfully with the soup.  The texture of the soup was velvety and the garlic croutons lent a nice textural contrast with their crunchy-then-buttery-soft quality. 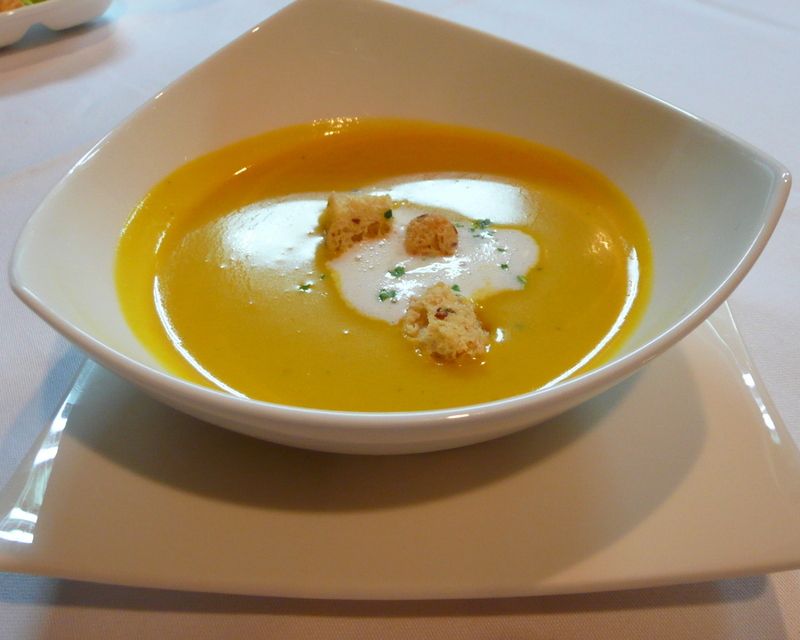 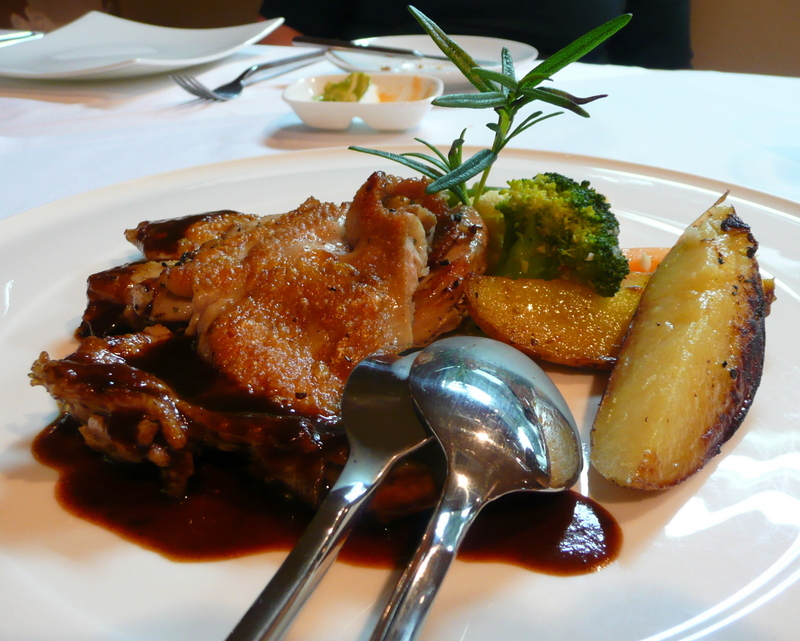 There were three main courses from which to choose and since both nights we had three diners, we chose all three and shared.  The first was a roasted boned baby chicken with port wine sauce, above.  This was a very nice take on a menu standard – roast chicken – and was successful because the chicken itself had such nice flavor.  Beyond the sauce, beyond the crisp skin, this was one tasty chicken.  The port sauce was a nice addition and the accompanying medley of vegetables were well-prepared.  The chicken suffered from some toughness on Saturday night, but was none the less flavorful.

A vegetarian option, gilled polenta with sauteed mushrooms served with rocket salad, below, again took a classic combination and brought out the best of the flavors and textures through skillful preparation.  The dish was piping hot and the polenta perfectly crisp on the outside and creamy on the inside Saturday evening, making it even more satisfying, although it would benefit from just a few drops of balsamic vinegar to complement the earthiness of the mushrooms. 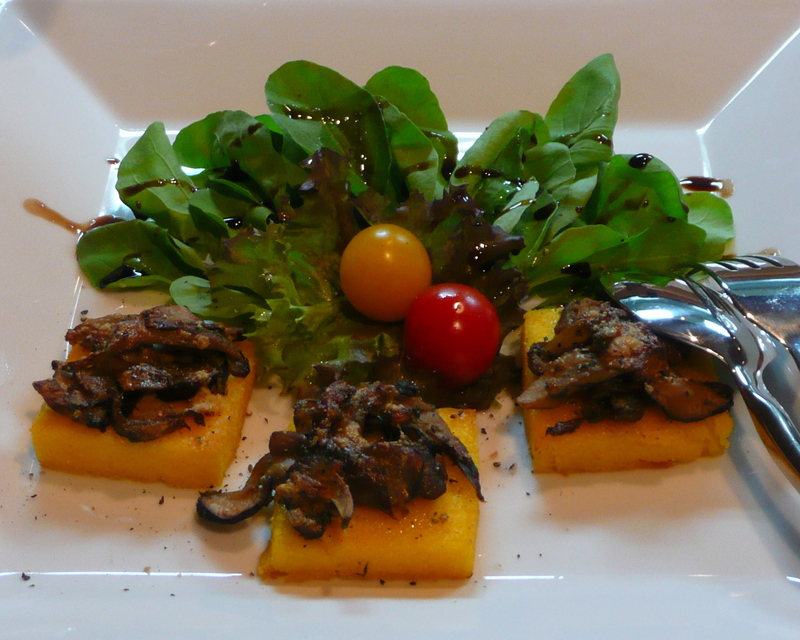 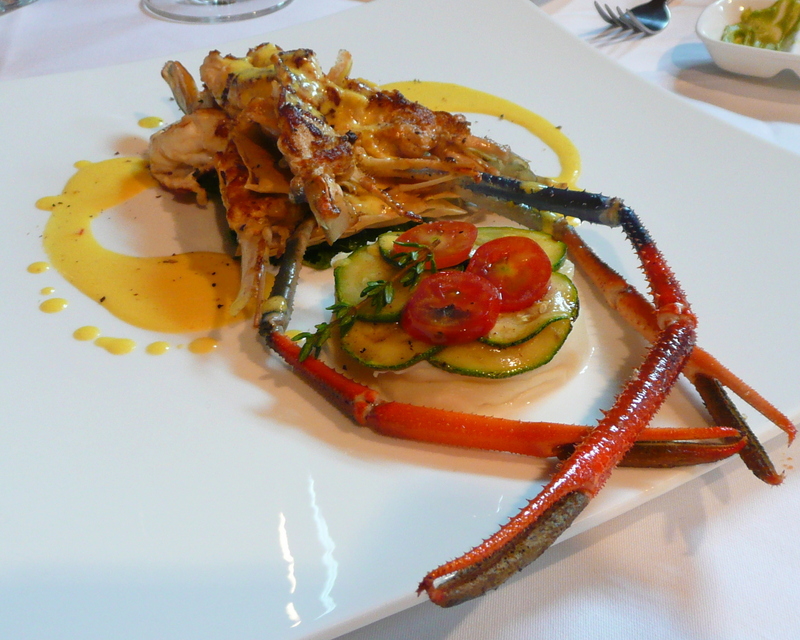 The third main dish was a millefuille of river prawn served with saffron creme sauce, above.  This was the most “artsy” of the dishes but was actually much simpler than it may sound.  Resting on a bed of spinach – Tawn thought zucchini would have been a better choice, but I really liked the flavor of the spinach – the prawn was sliced and separated by a layer of puff pastry.  The textural component of the pastry was an interesting touch; my dilly-dallying on Saturday, trying all the other mains before concluding with the prawn, did the texture no favors but the fault was entirely my own.  The saffron creme sauce lends a nice richness and a subtle hint of floral spiciness to the fresh, clean flavor of the prawn meat.

On Saturday we ventured briefly onto the a la carte menu to try the spaghetti with scallops (imported from the US, which seems unnecessarily far) in a tomato and capsicum sauce, below.  Tawn found this to be reminiscent of the satisfying foods of his childhood, the sweetness of the peppers in the sauce playing nicely with the sweetness of the scallops. 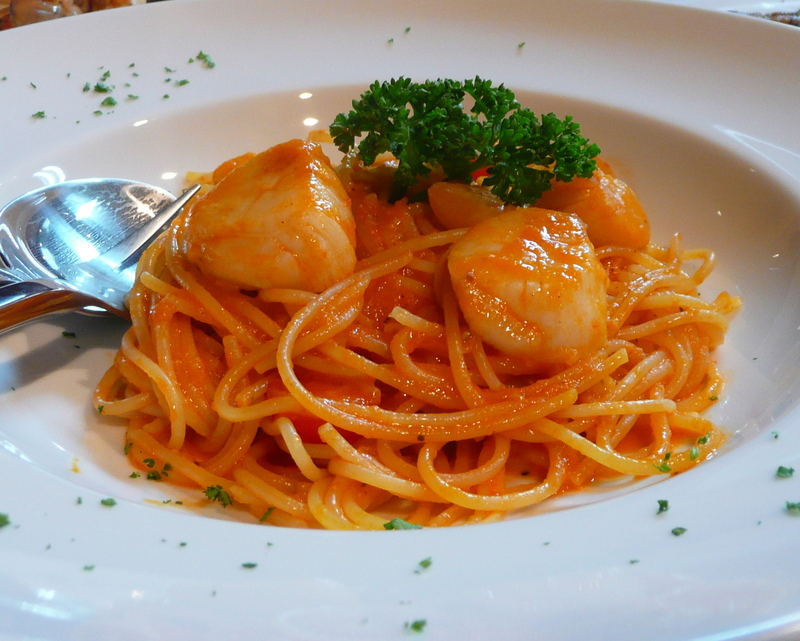 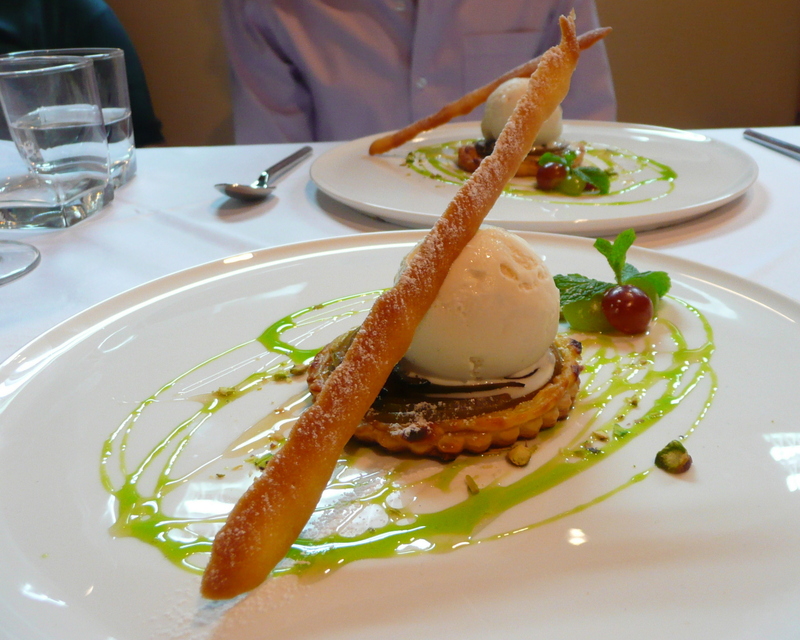 Dinner concluded with a very nice apple pie with vanilla ice cream, above.  This has to be the most classic of “comfort” desserts (except for the tasty but overly frequent creme brulee that seems to be on the menu of every restaurant in creation) and it was so nicely done.  Constructed as a tart, the pastry crust was flaky and tender, the apples cooked to just the right point of softness, and the accompanying honey-based sauce (colored by pandan leaf, is it?) was a beautiful addition, albeit a little too sweet on an already sweet dish.  This proved to be a very satisfying finish to the dinner.

Throughout dinner both days, we received extremely polished and attentive service.  Right now the dining room is not filled to capacity and hopefully the staff retains their polish in the heat of a busy night.  But at this point the very good food is accompanied by the sort of service organization lacking in many of the fine dining restaurants in the Big Mango.

In speaking more with the chef, he sounds very interested in exploring the use of local ingredients as well as doing special menus featuring the cuisines of different regions around the Mediterranean.  The second idea is one done well at several restaurants, and the upcoming focus weeks – “Vegetarian Delights” the week of February 18th and “The Food of Spain” the week of February 25th – will give Cole some room to play.

It is the first idea, though – the one about exploring more local ingredients – that may prove to be the biggest test of his skills and, perhaps, Khrungthep fine diners’ often limited adventurousness.  With the host of great ingredients available on the land and in the seas around Thailand and Southeast Asia, it is a shame that more local diners are so insistent that their tomatoes are imported from France, their cheese from Italy, and their sea bass from Chile.  I’m very excited about the idea of more dabbling with locally-sourced ingredients as I tire of paying high prices just to subsidize the long air and sea journeys of my ingredients.

As for Friday and Saturday nights’ dinners, Paradox looks to have the sort of foundations that make for a truly successful restaurant: good space, good location, and – most importantly – good food and service.  The chef’s kitchen is turning out thoughtful and well-prepared versions of standard dishes – a good way to get started.  He shows enough creativity and imagination to play with some of the assumptions diners might make and, in so doing, may have the opportunity to explore some really interesting culinary ground.

There are still many questions to be answered about how the menu develops, how the space is used once construction is finished, and whether the quality can be consistently maintained over time.  But from these first few visits, I have no doubt that Tawn and I will make Paradox a destination when we want to celebrate birthdays, promotions, and other special occasions.