The rest of the weekend baking project – kind of my own personal Iron Chef challenge – was around pumpkin.  Pumpkin is an interesting ingredient for me because as a child, I disliked both pumpkin and squash, to the extent that the flavor would literally make me gag.  I’m not sure why.  Maybe the flavor is kind of strong?  The one squash dish I did like was the squash rolls – a dinner roll made with some squash puree – so maybe that validates my theory, since the rolls didn’t have a very strong squash flavor.

My mother went through a big tofu phase sometime in the late 70s.  We lived in Northern California, meat was expensive, and tofu was all the rage as a healthy, inexpensive meat substitute.   My mother got hold of two cookbooks by Gary Landgrebe – Tofu Goes West and Tofu at Center Stage.  On the cover of the first cookbook was an illustration of a covered wagon being driven by a block of tofu.  On the second was a picture of a stage with a block of tofu tap dancing in the center of it.  No kidding.  I was able to find the books online still, but no cover pictures.

Anyhow, Landgrebe’s take on tofu was basically to substitute it anywhere a recipe might call for ground beef.

It wasn’t until junior high school, when I started hanging around with several first generation Chinese-American friends, that I finally learned to appreciate tofu.  The same probably goes for squash and pumpkin.  More exposure to the vegetables prepared in a greater variety of ways, has led me to really enjoy them even more.

Roasted root vegetables, with squash and sweet potatoes, for example.  Mixed with some olive oil and rosemary… mmm, yummy!

So it was with pumpkin pie.  Roka challenged me to make a pumpkin pie from scratch.  My first attempt was a few weeks ago.  It turned out okay so I bought a whole mess of pumpkins and decided to make several pies and, while at it, a recipe of pumpkin biscotti.  Tawn’s mother really likes biscotti and I haven’t made her any in a while. 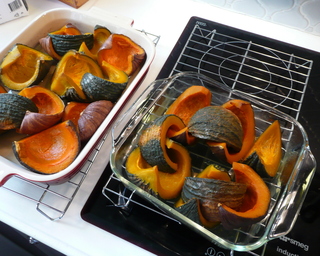 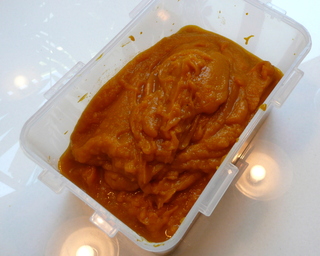 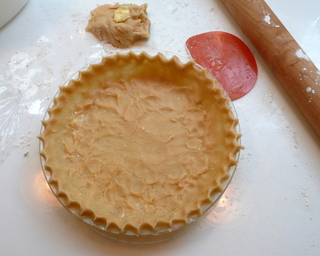 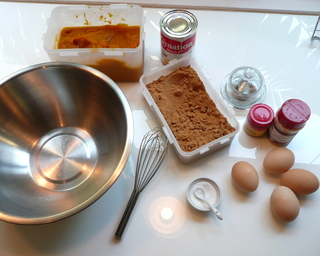 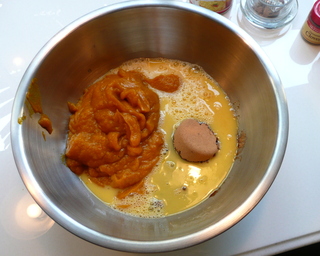 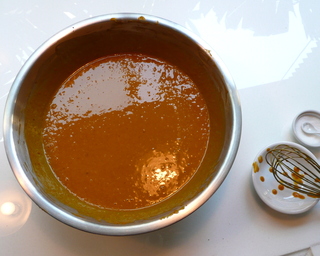 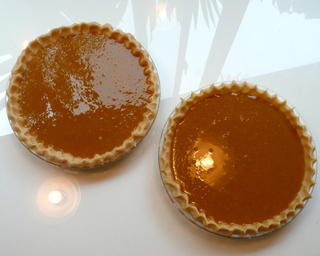 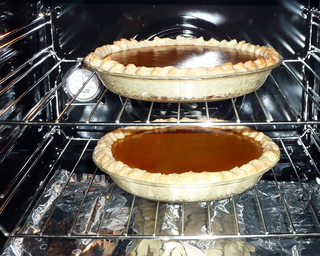 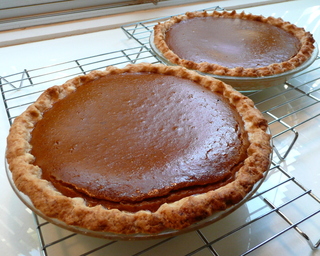 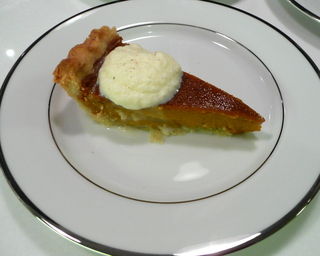 The pie worked out quite well.  It isn’t that much extra work and the flavor is really lovely.  The pie crust is still an issue, though.  What the heck is going on with it?  I’m going to Cooks Illustrated to find out why I’m having so much trouble with it.  It tasted fine but the texture was all wrong.  After rolling it out, I couldn’t lift it up.  It just disintegrated!

Roka came over Monday night to try the pie.  Since I had two (and we didn’t want to scarf them down by ourselves although we certainly would have considered doing just that) I invited other people over.  Markus, his visiting mother and niece and nephew came over for what was, for them, a pre-dinner dessert.  I also served them some biscotti and baguette washed down with tea.

Roka really liked the pie.  Markus and family did, too, but it is Roka’s opinion I’m most interested in because she was the one who first challenged me to make a pumpkin pie from scratch.  She was sad, though, because she thought that since I had made a successful pumpkin pie that I would move on to other things and she wouldn’t get another one.  She drew this conclusion since she tried chocolate souffle for her first time two months ago, liked it, and I haven’t made it for her since!

The whipped cream looks a little funny on that pie, doesn’t it?  Markus picked up some whipping cream on his way over to try the pie and when I whipped it with my electric mixer, it never did really come together.  Not sure why.  Any theories or suggestions for me? 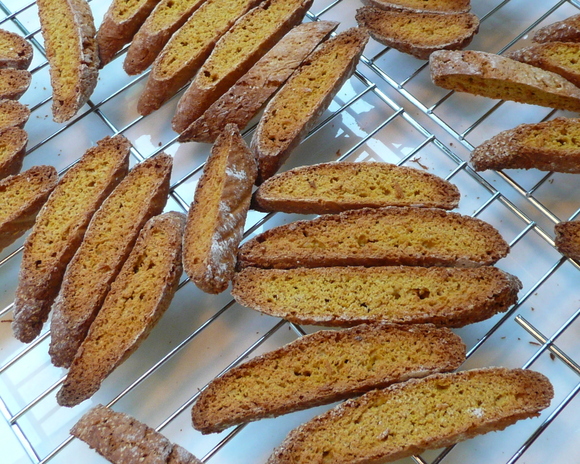 As for the biscotti, they turned out tasty but uninspiring.  I think they need some pecans or cranberries or white chocolate chips – or maybe a little bit of all three? – to give them some additional umph.

What’s next for the Iron Chef Thailand?  Nah, just kidding… I’m a noncompetitive cook.  My sister once suggested that we should have my cousin Patrick and I do an Iron Chef at a family reunion.  I’d rather we just plan a big meal together and prepare it.  This world is competitive enough without bringing it into the family kitchen.