This may be my last significant entry for about a week or so, as things are getting quite hectic with the move.

Last Friday all of the major plumbing and electrical work came to an end at the condo.  That doesn’t mean it is over, necessarily, but in theory there is enough completed that we could now live there.  On Friday afternoon the floors were sealed and we let them dry over the weekend.  Only to come in and find that the half-meter long scratch by the front door looks even worse now that they tried to stain it to blend it in with the rest of the floor.  Additional work yesterday seems to have improved it a little, but as I told Tawn, the floor is coming “pre-distressed”. 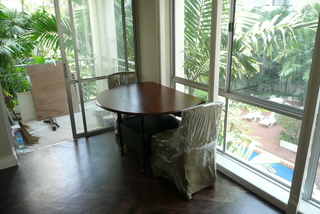 Monday, Tuesday and Wednesday there has been a parade of other workers coming in and I’ve spent several hours working on the solitary dining table with my laptop, as has Tawn, alternating shifts to babysit the details, since these workers seem especially prone to cut corners.

Left: One piece we didn’t have to have made was this drop-leaf dining table.  It looks nearly identical to the one in the Pottery Barn catalog on which I based my drawings.  Since space will be tight in the living/dining room a drop-leaf seemed to be the best option.  It can seat six easily and eight cozily. 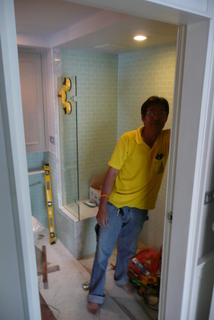 The shower glass has been installed, although there are configuration issues that will have to be worked out after we move in.  The doors should be raised and another strip of stone installed to keep the water from pooling in a small channel outside the glass.

Right: Installation of the glass shower doors which are of a “floating” type.  I’m a little skeptical how safe they would be in there was a slip and fall accident. 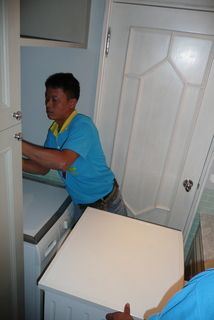 The washer and dryer have been installed (left), although the space doesn’t work as was intended and the air duct runs into the empty space above the ceiling but doesn’t actually run to the external air shaft.  Additionally, it sits too far forward.  We’ll probably have the cabinetry to the left of the dryer modified so the air duct can run through it instead.

It turns out that the cabinet quote didn’t include a 2/4 lazy susan that can open out and make good use of the otherwise hidden corner behind the oven.  After some comparison shopping, I bought a model from Häffle, a German manufacturer known for their precision and quality.  In order to get it that day I had to drive from their show room at Sukhumvit 64 (near the edge of the city limits) to their warehouse in Bang Na.  Being a farang, Tawn insisted the have someone ride with me to show me the way.  The 20-year old stock guy looked petrified but I assured him I was a good driver.  When we arrived at the warehouse, the workers gave him grief for having to be driven around by a foreigner.  That should give him something to talk about over dinner with his family.

Below: The Häffle warehouse in Bang Na.  Below that: Chris helps to install the shelving which included tremendously precise measurements that didn’t take into account the fact that the cabinet did not have flush doors. 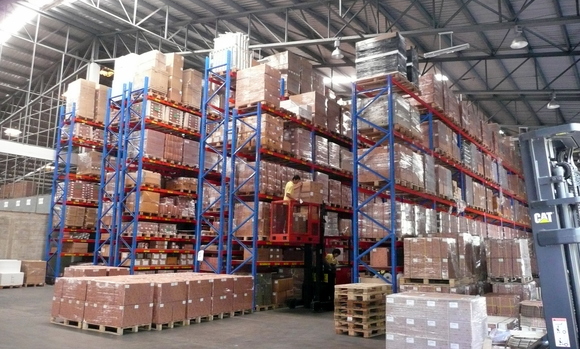 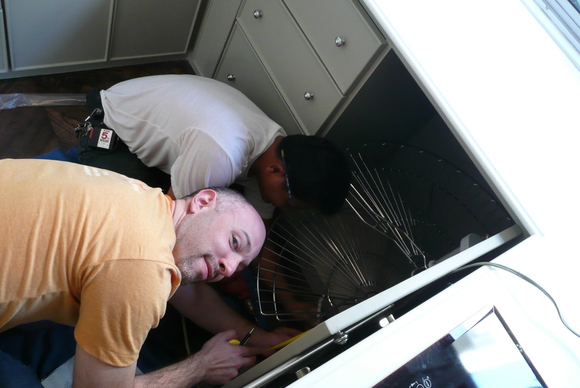 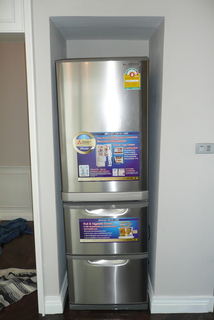 The refrigerator (right) has been installed but the floor is way off level and the handyman will have to figure out a solution.  Probably just a piece of wood under the left-side rollers to balance it.

Some unconditional good news: the oven and stove have been installed and work beautifully.  The oven really retains heat for a long time afterwards, which makes me think that it is well-insulated.  The induction stove is amazing.

A hole in the external wall for the hood vent has been cut and the duct installed, below.  It seems to work well but the hole is just plain ugly.  I was trying to describe to Tawn the liquid foam insulation that can be used to plug the hole.  He didn’t get what I was talking about so I’ll look on the internet for a picture. 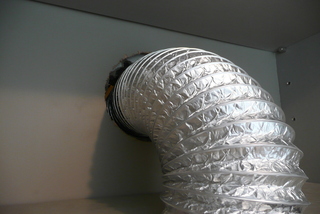 One outstanding plumbing issue is that the water filter under the kitchen sink is not installed, so the water supply to the sink has yet to be turned on.  No sink in the kitchen is not good, but we can work around it for a few days. 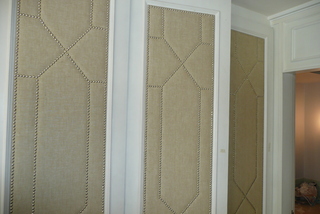 The bedroom cabinet doors were re-installed after the fabric guy created and attached fabric panels, right.  These will soften the room a bit and incorporate an idea I originally suggested, while conceding to Tawn’s taste for the studded padding.

There are four dozen other details that are being followed up on, none of which is serious enough to keep us from moving in and all of which will sound familiar to everyone who has ever built a house or done a remodel.  Nobody else cares about the details in your own house’s construction like you do, right? 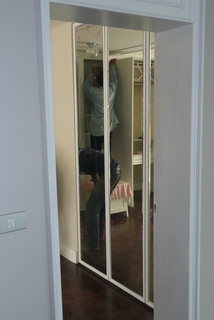 Case in point – the picture to the left shows a worker using one of our side tables as a ladder.  Tawn was, needless to say, not happy about their hesitancy to use and actual ladder.  Below, Tawn on the phone with our contractor, expressing his concern. 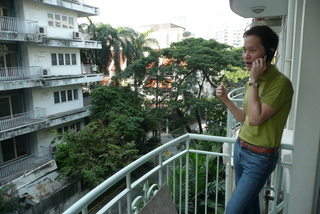 Thursday afternoon I will begin moving in boxes and getting the kitchen organized.  Then Friday I’ll begin moving clothes and some other boxes.  Saturday will be the big day with a pickup truck and a couple of strong young men to lift things.  Most of the stuff is going to Tawn’s parents’ house, though.  We will not move things into our place unless we specifically know where they are going.  We still have two bookshelves being built and until those are installed, I want to minimize the number of boxes we have stacked up.

Below: Tawn tries to catch his breath on the temporary sofa that we brought over from his room at his parents’ house.  The slip cover isn’t meeting his needs and more work will be done.  Eventually, though, the sofa will be replaced with a hide-a-bed sofa. 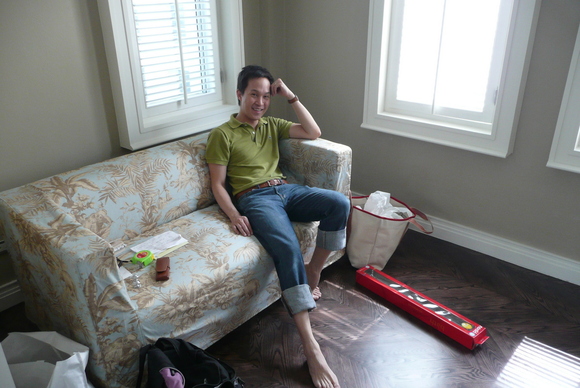 So my apologies for any absence of meaningful posts over the next week or so.  It will be busy here.

8 thoughts on “Move in rush about to begin”