Enjoying drinks at the top of the Banyan Tree Hotel with Kenny and Amelia the other evening, I was wondering about the tallest buildings in Khrungthep.  We don’t really have a concentrated downtown and the tallest building – Baiyoke Tower II – sits off by itself in a way reminiscent of a gangly teenager who has been shunned by his classmates.

Found this useful site – SkyscraperPage.com – that keeps the statistics on skyscrapers in cities around the world.  They also have nifty scale illustrations showing how the different buildings compare.  What’s incredible to me is that if you include both current and under-construction buildings, five of what will be Khrungthep’s ten tallest buildings are being built right now. 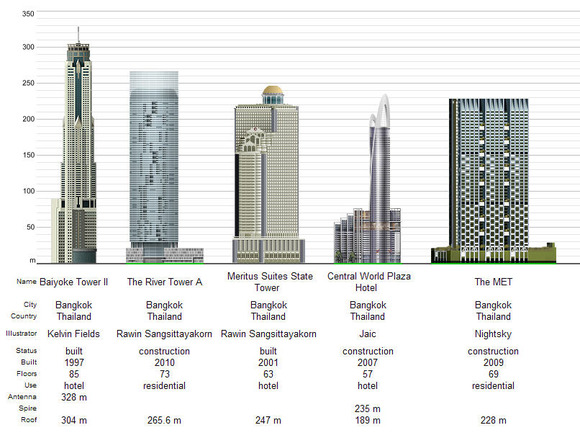 The award for “Biggest Blot on the Skyline” goes to The River Tower, a 73-story condo complex under construction on the western bank of the Chao Phraya just north of Taksin Bridge and across from the Shangri-La Hotel.  This building is completely out of scale for its setting.  I understand that after the plans were approved, the Bangkok Metropolitan Authority enacted legislation restricting future riverside developments in that area to only 7 stories.  Whether that was to prevent future behemoths befouling the waterfront, or to protect the views of the deep-pocketed condominium owners, no one can say with certainty.