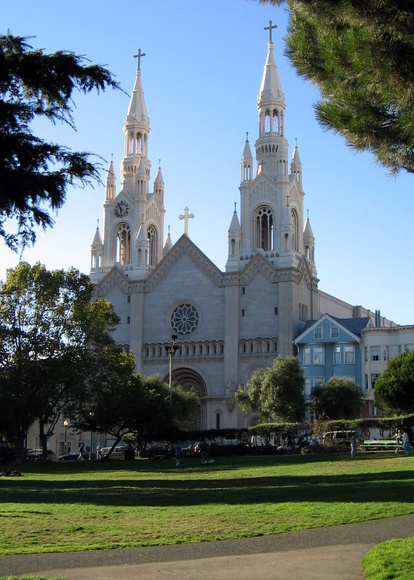 The main event, the main reason for my being here in San Francisco, was to attend Ryan’s wedding.  Ryan is one of my closest high school friends and during school and uni we played a very important role in each other’s lives at critical times.

Ryan married Sabrina, a San Francisco native who, when I first met her a little more than a year ago, I knew would become Ryan’s wife.  They are that kind of perfect for each other.

Ryan asked me to be one of his groomsmen, along with another high school friend, Sam, and his college friend Gerry.  There are several high school friends and family members who read this blog, so I’m going to include a fair number of pictures.  For those of you who don’t know the parties involved I hope you enjoy them nonetheless.

Right: The ceremony took place in Sts. Peter and Paul Church, which faces Washington Square in San Francisco’s North Beach neighborhood.  It was a gorgeous day with a gentle breeze, clear blue skies, and temperatures in the mid-20s.

Friday night we had done the rehearsal and rehearsal dinner.  It was an opportunity to meet a few of Ryan’s extended family members.  Through fate and circumstance, Ryan is the only person I know personally who had lost all his immediately family by age 28.  As such, it was especially meaningful to have some family members here including his auntie from Melbourne (who was dismayed to learn that I had been to Melbourne twice and had not called her) and cousins from Phoenix, Los Angeles and Toronto. 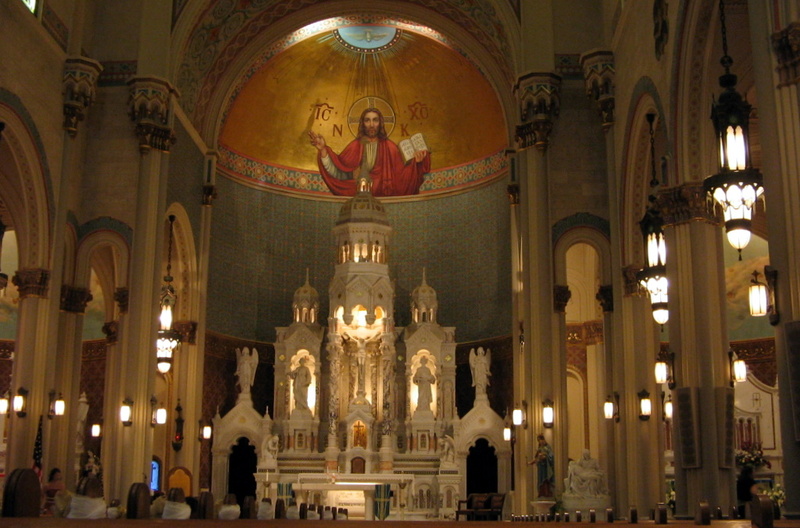 Saturday morning I joined Ryan and the other groomsmen at a hotel room near the airport to prepare.  This way, everyone was tuxed properly and accounted for, minimizing any nerve-wracking “where is he?” moments.  There I saw my new best friend, Gwynneth, whom I had met the previous evening at the rehearsal.  She is the precoscious four-year-old daughter of the best man.

Below from left: Gwynneth announces that she is a princess and that she loves the color white; Gwynneth and her parents at the church, struggling to keep her eyes open after I told her she blinked in the first attempt at the picture; Ryan and Gwynneth conspire before the service. 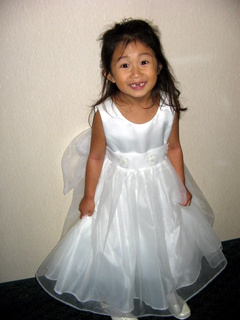 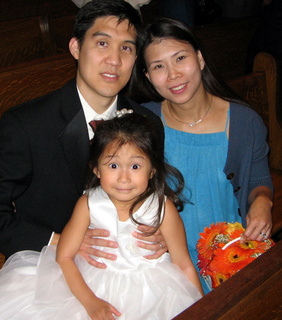 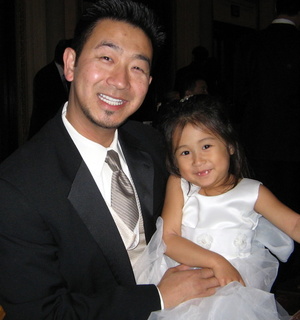 Since I was in the service, I didn’t get any photos of it.  But it was beautiful.  The bride and groom had prepared their own vows and had memorized them.  It turns out that the length pauses that came across as Sabrina’s near-crying-hold-back-the-tears moments were in fact her furious attempts to remember the correct order of her vows.  But it came across beautifully. 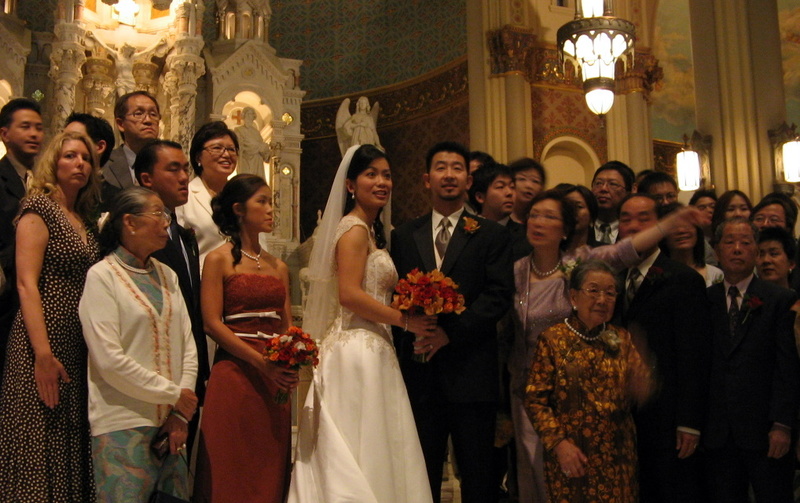 Above: Ryan and Sabrina pose with Sabrina’s family members.

After a small reception downstairs in the church where people had an opportunity for individual photos with the bride and groom, the wedding party piled into a limosine and we headed to Golden Gate park for picture-taking.  There were some very nice settings, including Shakespeare’s Garden located just behind the Academy of Sciences.

Below: Sabrina and Ryan posing in the park. 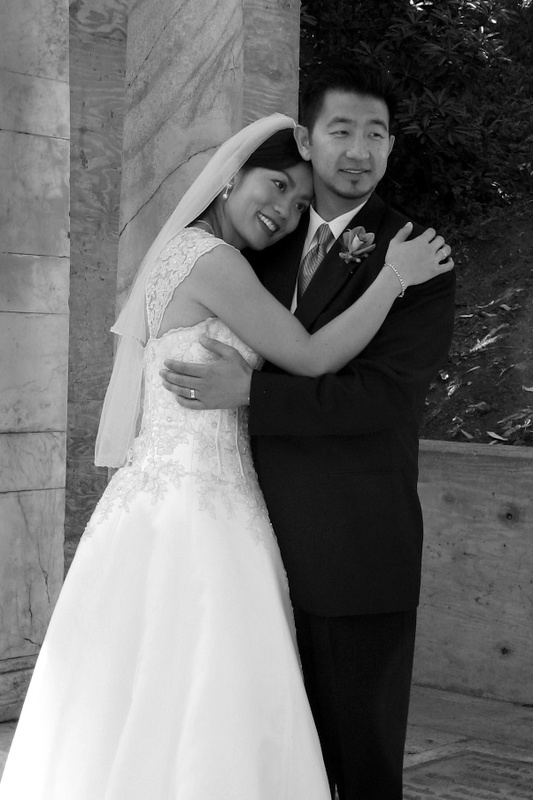 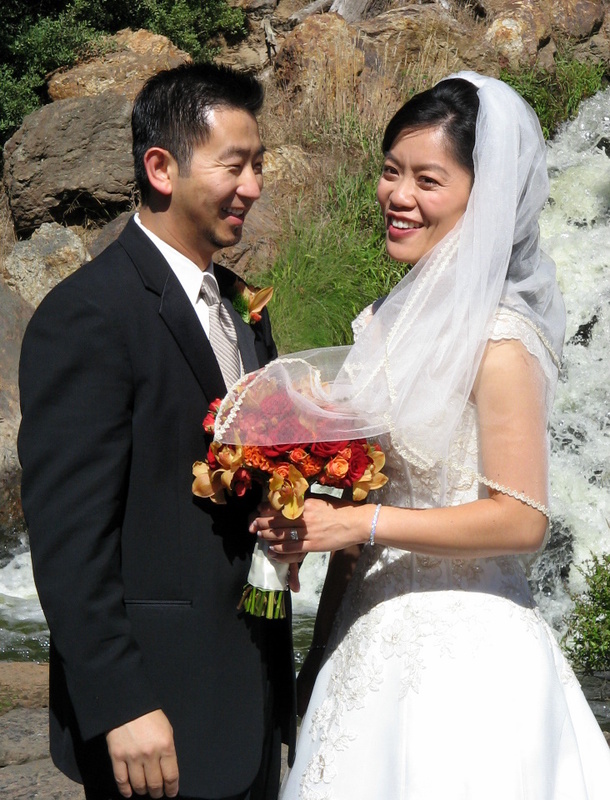 Not too surprisingly, things started to get a little silly on the limo ride from the park to the restaurant, below.  And we didn’t even have any champagne open. 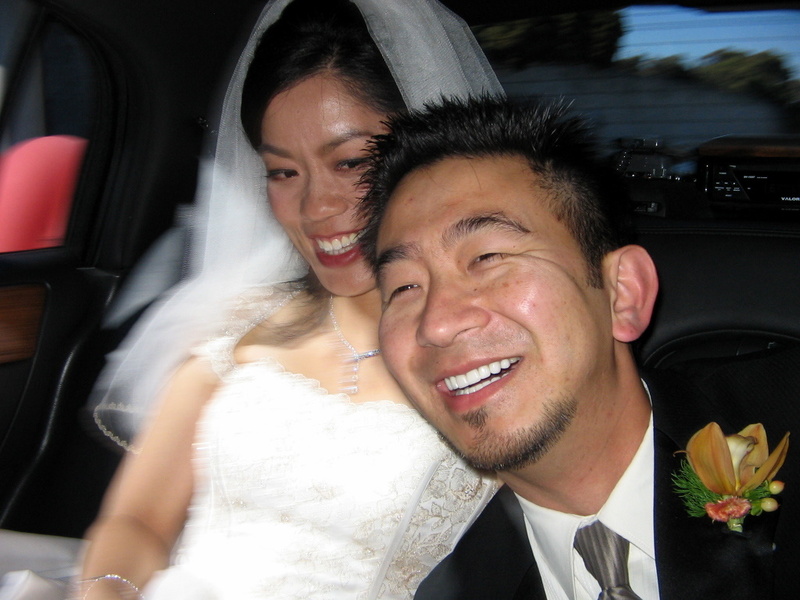 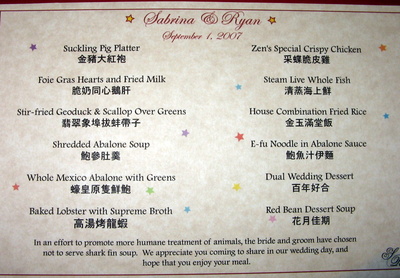 The reception was at Zen Restaurant in Milbrae, where we had the entire restaurant shut down for our party of 240 guests.  The menu was extensive and the food very good – click on the picture to the right for more detail – and I was impressed with how Sabrina and Ryan made the very politically and morally astute decision not to serve shark fin soup in consideration of how inhumanely it is harvested.

An hour before the guests arrived we held the tea ceremony, a Chinese tradition in which the bride and groom serve tea to the elders in their family and the elders then give them lai see – the red envelopes with money inside.

One theme that continued for the evening and which I thought was handled very tastefully, was keeping the memory of Ryan’s parents alive.  They were mentioned a few times, including in a slide show of Ryan and Sabrina’s childhood pictures.  Also during both the service and the reception, Ryan’s auntie from Melbourne stood as a representative of his parents. 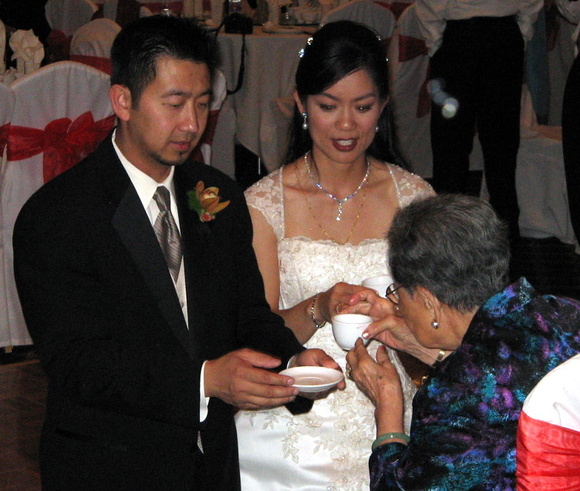 Above: Ryan and Sabrina serve tea to Sabrina’s grandmother. 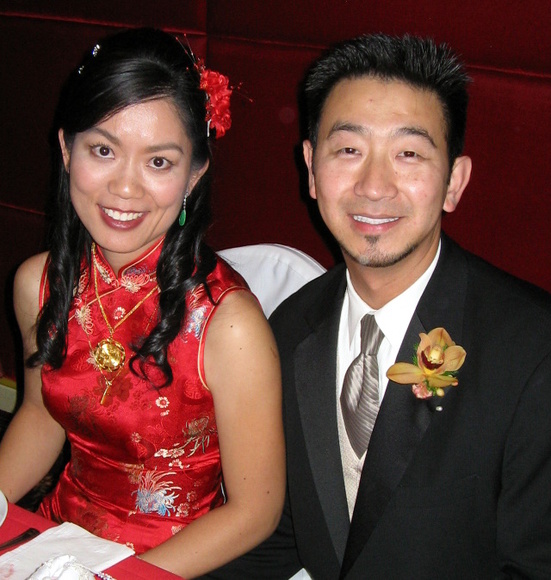 Left: One of the three dresses Sabrina wore at the reception.

Even before food was served, Ryan and Sabrina had their first dance (they had taken some classes so it turned out beautifully) and immediately at the conclusion of the dance, they broke into a second number from Grease!  Very nicely coreographed and apparantly a response from Sabrina’s brother’s wedding two weeks ago in which her brother and her mom had rehearsed a swing number without telling anyone but the DJ in advance.

This is a very fun and competitive family he’s married into!

The speeches were a big part of the evening, with Sam, Gerry and I each making a speech, all of which were very heart-felt and well received.  I quoted D.H. Lawrence: “May you have the courage of your tenderness” as a conclusion to my speech in which I told Sabrina that I had always known Ryan would marry her, but that I had not known her name until he first told me about her, and I did not recognize her face until he first introduced her to me.

Below: The bride’s ladies and the groom’s men. 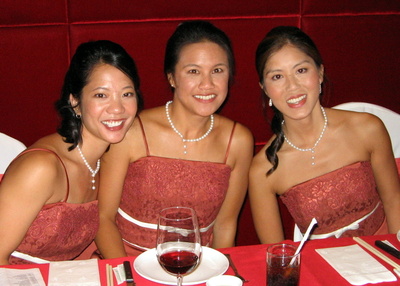 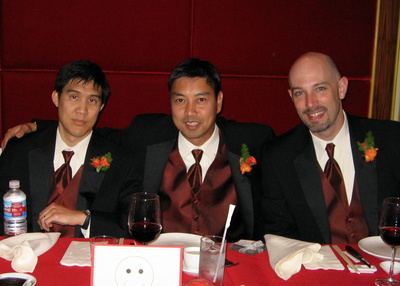 As the evening continued, the momentum picked up.  Unlike most Chinese wedding banquets where as soon as the last course is served, all the old folks pack up, they instead got up and packed the dance floor!  Things continued all the way up to 11:00, the time agreed upon with the restaurant to shut things down.

Below: The painfully shy ring boy (is that what they call them?), also named Ryan, finally came out of his shell during the reception when Gwynneth took charge of him and dragged him onto the dance floor by the hand. 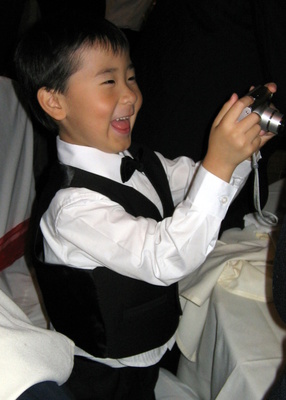 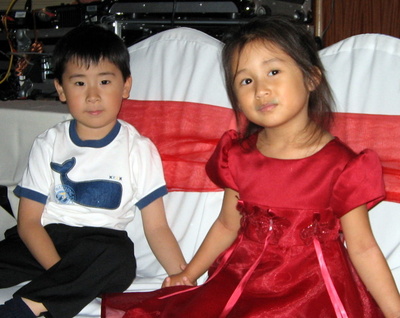 Ryan and Sabrina cut their beautiful cake mid-evening, a tasty way to top off the celebration.  I loved the flowers they chose, too – a very elegant yet stunning arrangement for the tables.  As Tawn always says, it is good to add some height to a room decoration.

Ryan and Tawn and I went to Vietnam together a year ago February, returning to Ryan’s hometown of Saigon for the first time since he fled in 1977.  That experience, as emotional as it was, re-cemented our connection from early high school.  It meant a great deal to me to be able to stand with Ryan on this important day.  I wish Tawn had been able to be with me, but I know Ryan and Sabrina felt his support even if he was not.

6 thoughts on “Ryan’s wedding a full day of fun”