It seems that we have a new constitution.  In a nationwide referendum held Sunday, Thai voters have approved the draft charter – Thailand’s 18th in the 75 years since becoming a constitutional monarchy – which paves the way for general elections in December. 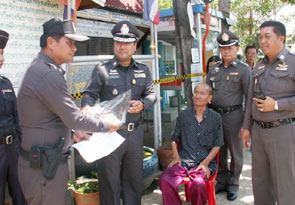 The Nation newspaper group reports a 56.7% yes vote (14.3 million people) versus 41.4% (10.3 million) against the draft.  Opponents of the new constitution have said they are very satisfied with the strong showing by their people, claiming that they achieved such high numbers despite government coercion and pressure to approve the draft charter.

There are also reports that five people were arrested yesterday for tearing up their ballots, including 78-year-old Chan Khammuang (seated, right) in Angthong, who reported tore the ballot in two after becoming confused by voting instructions.