Saturday afternoon I met Markus and Tam at Central World Plaza on a quest to design a commitment ceremony invitation for them.  Some people are born with the creativity gene, others get it implanted, and others still have it thrust upon them.  In this case, Tawn and I are thrusting our creativity on Markus and Tam.  With a little help from Martha Stewart, of course, and probably without nearly as much tact as Emily Post would require.

Actually, the true inspiration for our ideas about invitations comes from Samantha Lee, our friend in Menlo Park, California.  She’s the most creative person we know and she makes amazing things from paper.  Sam!  Come help us!

Our search at CWP was for different types of paper, including vellum, onto which I can print an overlay for the invitation.  The question is, is there a term for the frustration of living abroad and not being able to find something in your new city, but knowing exactly where you would buy it if you were back at home?

After purchasing a variety of paper types with which to create mock-ups, we went to MOS Burger for lunch.  MOS Burger (“Mountain Ocean Sky”) is a 35-year old Japanese burger chain and the Central World Plaza branch is their first location in Thailand.  In the weeks since opening, there has been a perpetual line of people waiting to eat.  Many of them are ex-pat Japanese and the restaurant was full of young parents with their toddlers, possibly reliving their own childhood trips to MOS Burger back in Japan.  Wikipedia entry on MOS Burger here. 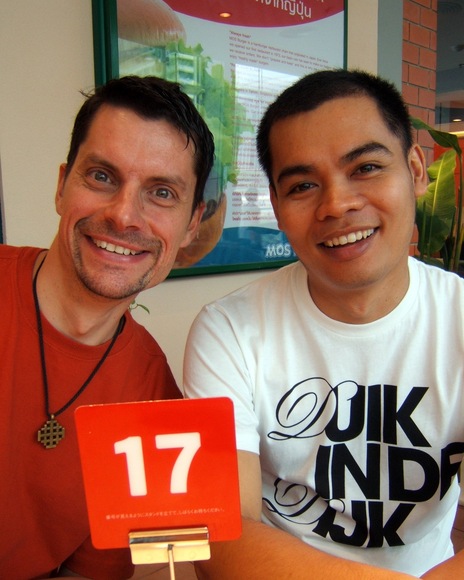 Our wait was only about ten minutes.  That’s our wait to order.  It was another fifteen minutes after that until our food arrived.

The house vinaigrette salad dressing, made in-store from scratch, arrives in little plastic containers that are nearly impossible to open.  We finally had to flag down an employee to ask him how to open the containers.  He struggled, but eventually opened them without spraying dressing everywhere.

How’s the food?  The salad is fresh with good lettuce and ingredients and the dressing is nice.  The fries are okay, not very crispy but they have good flavor.

The burger?  Well, the burger isn’t really that impressive.  While the beef tastes fine, the basic MOS Burger has an overly generous serving of special sauce that tastes like it should be on a plate of spaghetti instead of on a burger.  For starters, there is too much sauce and it has too sweet and “ketchupy” a taste.  On top of that, there’s a large dollop of mayonnaise, so the burger is too wet.

I will give them points for the quality of the ingredients.  The ingredients are fresh and flavorful.  The tomato slice on the burger looks just as red and meaty as in the pictures.  Which is to say, unnatural.  Tomatoes in Thailand usually are pale, so I’m not sure where MOS is getting their tomatoes.

While MOS Burger was an interesting experience, there is no need to go back anytime soon.  I’m all MOS’d out.

On the way to Central World Plaza, I shot this photo of a construction worker on a building next to Asoke SkyTrain station.  He’s on the scaffolding about three stories above the pavement, cutting an overhanging board.  With no safety restraint or shoes.  Is there a Thai Occupational Safety and Health Administration? 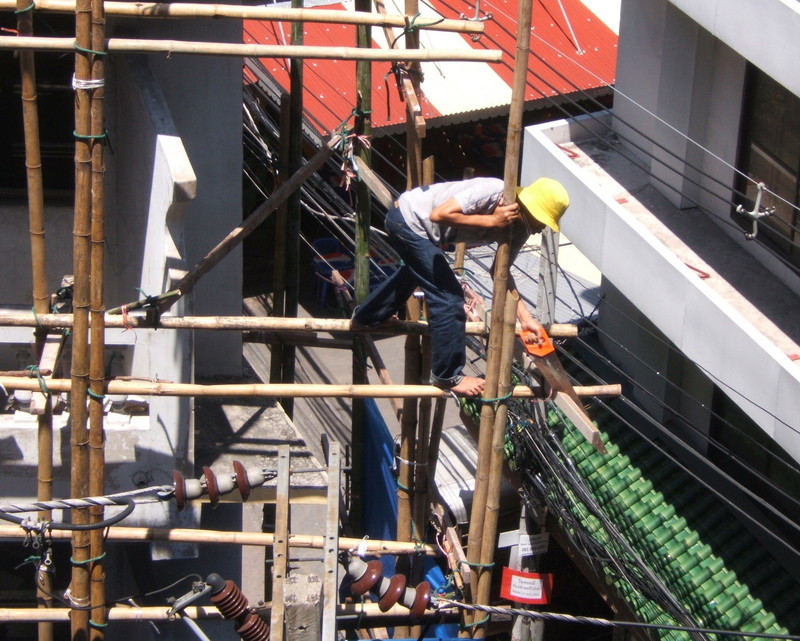 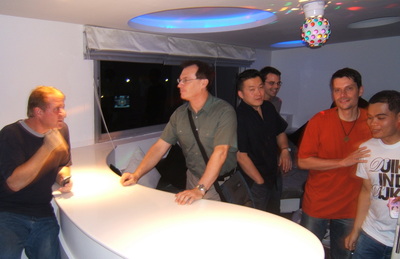 Saturday evening the long-discussed plan to go for karaoke finally came to fruition.  A group of fifteen of us gathered at R&B Karaoke on Naratiwatcratchanakarin Road (go ahead, say it three times fast) near Chong Nongsi SkyTrain station.

Right: As we first enter the room, Ken stakes out a place behind the bar.

Each of the rooms at R&B are decorated with a different theme.  We were originally booked in the Morocco Room but it was too small so we moved into the Future Room.  The Future Room looks like something from an Austin Powers movie.  Cool, baby… yeah!

Surprises: a very good selection of English language songs, although a little light on showtunes and standards; Ken, who has been adamant that he doesn’t like karaoke, spent about half the evening with one of the microphones; dinner and karaoke is a very good combination so long as you don’t sing with your mouth full. 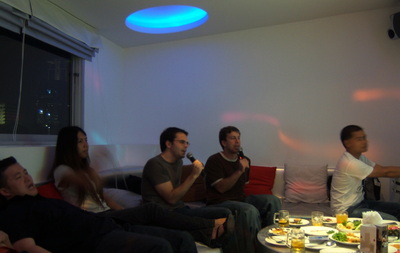 We had a fun time, starting just after seven and going all the way until midnight.  At only 800 baht per person, including food and drinks, it was a fair value.  This is especially true because there is a waitperson who is in and out of the room every few minutes, clearing plates, refilling drinks (which is how we managed to get to a third bottle of vodka), bringing more food, and assisting with technical problems.

An odd phenomenon, though: near the end of the night, there were several songs that came up that nobody expressed enthusiasm to sing.  My question is, why would you enter a song into the karaoke system if you don’t want to sing it?

Tawn’s theory is that people see a song in the catalog, think “oh, I really like that song” without considering whether they know it well enough to sing.  When the song comes up they realize they don’t know the words and shrink from singing it.

Nonetheless, I say we do more karaoke in the future.  It’s fun.