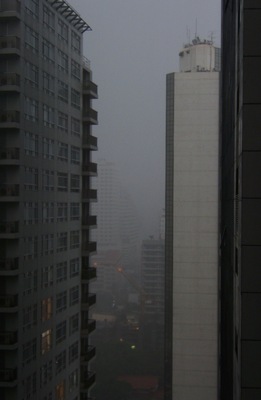 After a week of searingly hot weather, with clear skies lacking the clouds that provide a little bit of shade, Sunday afternoon the pattern broke and we had a tremendous afternoon thunderstorm.

Then again Monday afternoon, the clouds gathered, the sky became darker and darker and then like someone tipping over a giant bucket, the rains cut loose.

No rainstorm releases so much energy, so intensely, as a tropical thunderstorm.  From the twenty-fifth floor I was watching the sheets of rain as they gusted and eddied, the wind whipping the rain around the corners of buildings and sometimes carrying it back up instead of letting gravity take its due course.

All but the closest buildings disappeared in the clouds and rain.  Even though it was only four in the afternoon, it looked nearly as dark as night. 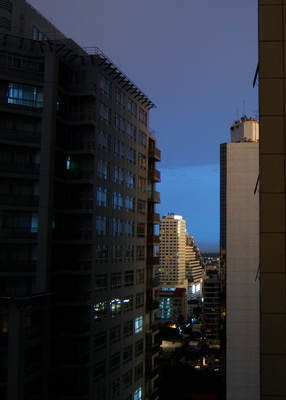 And then the lightning and thunder!  I could hear the storm cell approach as the baritone rumbles came more closely after the heavenly camera bulb flash of lightning until finally, they were nearly one in the same.  As if from the sound of the sky itself being torn asunder, the windows rattled from another roaring boom as the storm passed right overhead.

As it moved east, I stepped onto the balcony and watched the Tesla ballet of lightning connect heaven and earth again and again.  Thirty or forty minutes after the flood gates had opened, enough energy had been released to appease nature and the clouds dissipated.  A vibrant orange light reflected off the newly-scrubbed buildings as the sun, now lower in the west, bathed the damp city in its warm glow.

As the sun set, all of Khrungthep enjoyed a broad palette of blues, purples and indigoes and an exceedingly crisp view across a normal obscured city.

Here’s a short video I edited in an attempt to capture the sensation of the storm: