The social circle continues to develop here in Khrungthep.  Over the past few months, Tawn and I have been introduced to more people, have started to know them better, and are creating opportunities for those people who don’t already know each-other to meet.

This is something I particularly relish.  Responding to one friend’s observation that my friends usually have an interesting degree of interconnectedness, I explained that I really like introducing people whom I think will be a good match as friends.

When I think about any particular group of people, I imagine any number of good conversations just waiting to happen.  Then, I try to orchestrate those conversations or, at the very least, to get the right people together to create the potential for the good conversations; the rest is up to them! 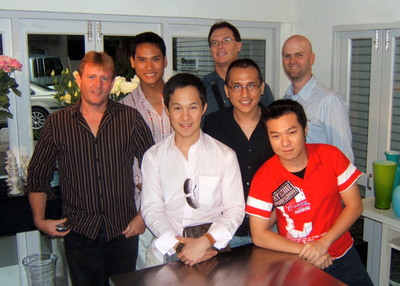 It does seem that the art of conversation is slowly dying in this television and internet influenced age, especially the art of conversations among newly-introduced people or even perfect strangers.  There are any number of reasons why the ability to converse with others is important.  Especially in this era of globalization, conversation with others creates empathy and understanding, helping us find common ground in a world of differences.  There’s an interesting organization called Conversation Cafe that is consciously trying to cultivate a culture of conversation.

We had the opportunity for the conversational strings to be played on Sunday, when a group of friends came together to attend a jazz concert, a celebration of what would have been the 90th birthday of Ella Fitzgerald.  The concert was held at the Thailand Cultural Center’s recital hall, a very relaxed performance that had featured small ensembles in the first half and a big band setting in the second.  Above: Ken, Nath, Tawn, Vic, Kobfa, Prawit and Todd. 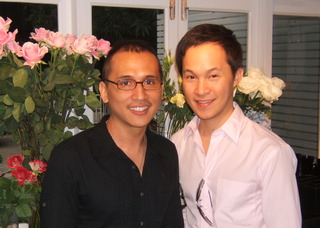 Left: Kobfa and Tawn in the flower shop half of High Tea.

Many of the performers were students of the lead pianist and at times their inexperience in public performance showed, including a pair of the big band members who resisted the band leader’s encouragement to perform an improvisational solo.  Still, it was a very good performance and you could tell all the musicians were having fun.

The singers were also very talented, five or six different ladies including some well-known popular singers.  It made for an enjoyable afternoon.

The concert was proceeded by lunch at High Tea, a cute little flower shop / restaurant just off Soi Langsuan.  This was an opportunity for some new introductions, as Todd brought his friend Nath, whom I had heard about but never met.  Also, we found out that it was Todd’s birthday!  So a trio of desserts complete with candles was ordered and we sang happy birthday for him. 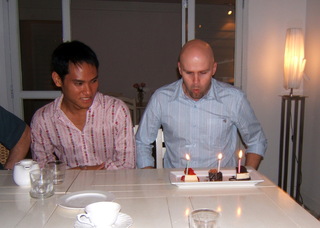 I’ve never quite understood some people’s hesitation to celebrate birthdays.

Hmm… actually, as I write that sentence I realize that isn’t true.  There are several times when I’ve been hesitant to celebrate my birthday and at least once when I was a child that I refused to celebrate it at all.  Which is interesting to me (as I have this moment of memories flooding my mind) because these days I enjoy celebrating my birthday and have never had any problem with getting older.  As I asked Todd when he lamented turning 39, “Are you happier now than you were ten years ago?”

Right: Nath looks on as Todd blows out his candles.

Also in the category of “Meeting People”, Monday evening Tawn and I met his cousin Mee and his friend Richard for dinner.  After years of being convinced that he might be the only gay person in his very large extended family (Tawn is grandchild number 35 of 37), about a year ago Tawn received an unexpected call from his cousin Mee, a single baker in his mid-40s who lives in Buriram Province, Tawn’s father’s hometown.

Mee had decided to finally come out of the closet and, when he first approached a few of the other cousins about the matter, they all gave the same advice: You should go speak with cousin Tawn.

So Tawn gave Mee whatever advice and support he could, and speaks with him from time to time, usually when Mee gives a call at some late hour in the evening.  For a baker, I’d think that he would get to bed early. 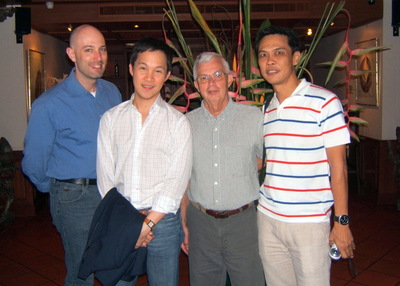 Fast forward a year, and Mee has been seeing a retired American named Richard who lives in Portland, Oregon and travels to Bangkok once or twice a year.  Mee calls and tells Tawn that he’ll be in town as Richard is coming for a visit, and invites us to dinner.

We met on a rainy Monday evening at Baan Kanita, an upscale Thai restaurant that specializes in Palace Cuisine.  I think Tawn was very worried that the dinner conversation would go smoothly, which it did, because he wanted the experience to be a good one for his cousin.

One observation I made is that when Mee and Richard arrived, Mee came up and instead of returning my wai, just gave me a big hug.  Commenting on this later to Tawn, I said how shocked I was because hugs are pretty unusual for Thais and especially so on a first meeting.  Tawn responded that he had told Mee so much about me over the past year that he probably felt like he already knew me.

The family gets larger.