Wafting through the breeze, the sounds of Songkran splashing continued to enter through the open balcony doors as I spent most of Saturday at home.  Tawn was at his parents’ house and had to take his father to see the doctor.  Saturday evening we went down to Paragon – I mean, really, Siam Square is the center of Khrungthep – and we met friends at Vanilla Brasserie for dinner. 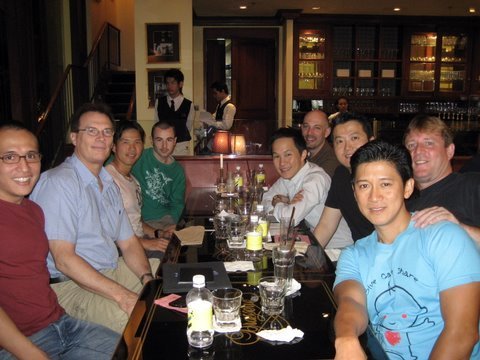 Our circle of mostly-expat friends continues to grow as we were finally introduced to Ben and Jason, friends of Tod’s about whom we’ve been hearing for the past year but whom we were beginning to think might just be imaginary as every occasion to meet them failed to materialize.  It turns out that they are real, and really nice, too. 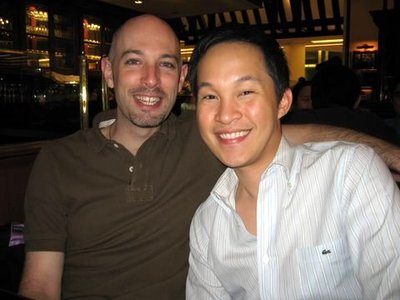 The challenge of building an interesting circle of people is to ensure there is enough variety: all American-Thai couples gets a bit repetitive and so it is nice that there is an increasing mixture of people.  We still need to diversify a bit in terms of gender, though: Pune is often the only woman!  It would also be nice to find some Thai-Thai couples, not to mention – gasp! – more straight people.

What table arrangement works best for groups?  I think a round table is nice because it is easier to talk to more people, although the people across from you can seem far away.  We had a rectangular table yesterday and the people at the other end did feel especially far away.  I didn’t have a chance to visit with Suchai or Tod.  But on the other hand, I had a good opportunity to get to know Ben and Jason.  Maybe the ideal is that after the main course is finished, there’s a reshuffling of seats?

(What would Martha do?)

3 thoughts on “Saturday Evening at the Mall”