My new responsibility is home nurse, taking care of Tawn over the past twenty-four hours as he’s been recovering from a bout of the stomach flu.  I don’t know if it was something he ate or just a bug he acquired somewhere in the course of his day, but he was finally able to eat some plain congee last night and keep it down, so he must be heading towards health.

As a result, we had to cancel dinner plans last night with a friend from San Francisco who is now working in Jakarta.  He and his partner own a condo here in Khrungthep so no doubt there will be another opportunity to visit.  There’s also dinner plans this evening to cook with Tawn’s friend Ja at her cooking school.  Hard to believe it has been six months since we last did that.

After my Thai tutoring yesterday, an intense two hours learning about the Thai educational system – lots of technical vocabulary – Ken and Markus met me at Bitter Brown, the coffee shop / bistro where I do my lessons, for lunch.  I decided to invite them to meet me there so they could meet my teacher, Khruu Kitiya.  Ken is now living here and wants to start studying, and Markus studies intermittently but his tutor charges half again what Khun Kitiya charges.  So hopefully they make some connection.

Recently, I’ve been giving a lot of thought to planning and urban development issues here in the Big Mango.  Urban planning is a field I briefly considered entering, and I took some prerequisite sociology courses at University of California, Riverside, during the six months I studied there.  It build nicely off my experience doing architectural drafting during high school, which ended up being an area of emphasis.  Ultimately, I won’t go back at this point and fulfill the educational requirements to work in the field, but it remains an area of interest.

On my street alone, the seven-minute walk from the apartment to the corner of Sukhumvit Road, there is a ferocious amount of building and renovation activity. 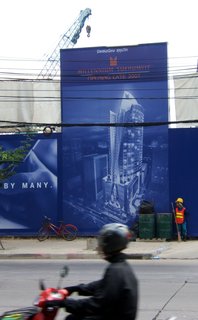 For example, across from the Siam Society there is a project (I think a condominium but maybe a hotel?  You can never tell the way they market buildings these days) called Millennium Sukhumvit.  I posted this picture of the construction site in November 2005, shortly after I moved here.

They were still building the foundation and under-structure, which has to stretch down quite far to reach more stable soil as the entire Khrungthep area is a massive flood-plain.  Below is a picture from Thursday of this week, showing the project in its current state (with the green shroud): 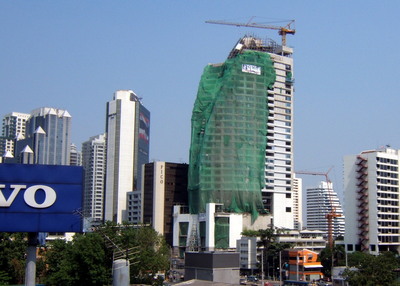 Just up the street from the Millennium Sukhumvit, on the opposite site, are a pair of older office buildings.  One was occupied as a branch of Thai Military Bank until just a few months ago and is about eight stories tall.  The other is about twelve stories and has been unoccupied since I moved here, but  its car park in the back serves as overflow parking for the Siam Society (located next door) when they have events.  Between the two in the front part of the property is a small one-story hawker center where I sometimes eat lunch – the yellow wall in the photo below is the hawker center.  The Thai Military Bank building has the narrow windows behind it. 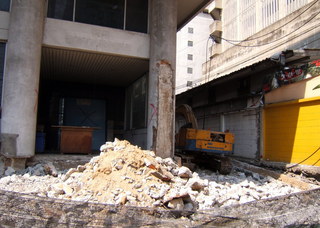 I’ve noticed over the past week or so that workers have been gutting both buildings.  Everything from insulation to HVAC vents (probably no heating, just VAC) to desks have been removed into dumpsters.  Yesterday they started the process of breaking up the sidewalks and driveways surrounding the buildings, which leads me to believe that a full-scale demolition will occur soon.

How would they do that, use explosives to implode the buildings?  Maybe the other buildings are too close, though. 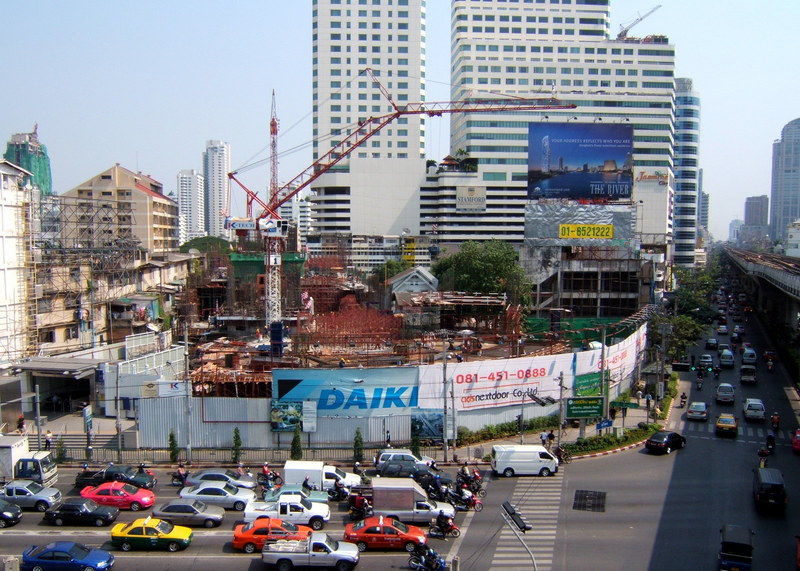 On the corner of Asoke and Sukhumvit, right next to the Skytrain and subway stations, on what must be one of the most valuable corners in the city, is a new construction site.  I think the entrance is technically one block over on Sukhumvit Soi 23, but it will front the main intersection.  No signs indicating whether this is office space, condos, a hotel, retail, or a combination of things.  It would be a good location for a mixed-use building although the footprint is a little small.  What is interesting is how the property is key-shaped, the developers apparently not being able to buy the smaller abandoned shop houses to the right of the construction site.  The entrance to the MRTA (subway) is on the far left of the picture.

Interestingly, there is a billboard for The River, a high-end 70-story condominium complex to be build across the river from the Shangri-La Hotel.  To put it in context, the Shangri-La and surrounding hotels are maybe 25-30 stories tall, if that.  The State Tower (with the golden dome and outdoor bar and restaurant), which is the tallest building nearby and the second-tallest in the city, is only 68 stories.  Baiyoke II Tower is 81 but is further away.  Subsequent to its approval, the Bangkok Metropolitan Authority has capped future riverside construction at eight stories.  That’s right, eight.  We’ve seen one project so far that makes it look like they will enforce that cap. 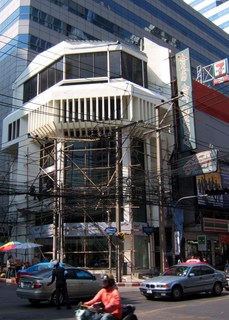 In my neighborhood there’s also been a lot of properties that have been recently renovated and cleaned up.  This picture is on the corner of Asoke and Sukhumvit 21/1 (i.e. the first sub-soi off Asoke), location of the dueling 7-11’s.  (One on the right hand side of the picture, the other directly across the street.)

This building, which used to be the Asoke Art Gallery and seems physically connected to the Phra-Samit Tower (behind it), has been ugly from day one.  Dirty exterior concrete, broken sidewalk area around it, etc.  They’ve been doing interior work to transform it into something and 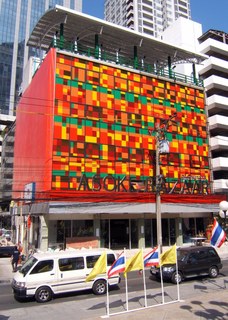 the inside is looking nice.  This week they started painting and updating the exterior.  Sadly, no amount of work will remove the hideous web of cable and telephone wires that are tangled in front of it, so this building is destined to always be ugly.

Of course, we recently had the recent renovation of the Asoke Bazaar building on Sukhumvit 21/1.  I haven’t been in to see what is actually being sold there but the building has added some color to the neighborhood.

Unfortunately the building owners put someone on the street corner most of the mid-day with a megaphone to bark announcements at passers-by about the grand bargains to be had at Asoke Bazaar.  Noise pollution in a city that already has a plentiful supply of it.

2 thoughts on “Nurse Chris and the Building Craze”