Friday evening my parents made it.  This time connections through San Francisco and Tokyo Narita were smooth and there were no weather delays anywhere.  Yeah.  This evening (Saturday) I’ll go back to the airport a third time to pick up my Aunt Sandy and Uncle Dick.  Then tomorrow morning I’ll pick up Lilian and her mother. 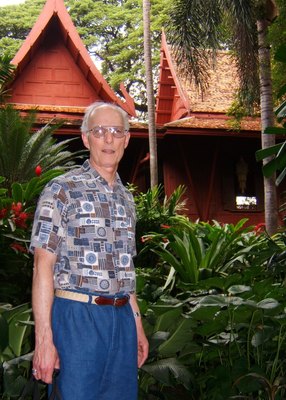 Yesterday was a pretty low-key.  About ten, Ken and I headed from his hotel and took the canal taxi down Khlong Saen Saeb, alighting at Tha Hua Chang (Elephant Head Pier, thus named because it is at the bridge that has four elephant heads on each of its four decorative posts) and walked to the Jim Thompson House.

This is in some ways a very touristy thing to do and in others, a really nice look at Thai-style architecture.  They continue to make some improvements to the facilities and have a special exhibition on called “Lost in the City” to celebrate the 100th anniversary of Jim Thompson’s birth.

Thompson was the American entrepeneur who, after World War II, settled in Thailand and recognized an opportunity to take the dying craft of Thai silk-making and transform it into a world-class brand.

In 1967, Thompson was visiting the Cameron Highlights in Malaysia and disappeared while on an afternoon walk in the jungle.  Nobody knows what happened to him.  Interestingly, his horoscope based on the day and time of his birth warned that his 61st year – 1967 – would be a bad one for him.

Above: Uncle Ken in the gardens at the Jim Thompson House.

2 thoughts on “Three Down, Four to Go”