Ah, Melbourne.  Where you can experience four seasons in a single day.  Today we had three of them.

My flight down to Melbourne was quite good.  While I didn’t get any pictures, I really enjoyed meeting up with Bruce during my Singapore layover, having a chance to meet his friend, and having the opportunity to visit with Otto, too.  The flight out of Singapore was shorter – 6 hours, 45 minutes – than I thought it would be, allowing barely four hours to sleep once dinner service concluded.  I slept very well; sometimes on the Singapore Airlines Raffles Class seats I can’t get comfortable.  Other times sleep comes easily.  This was one of those time, thankfully. 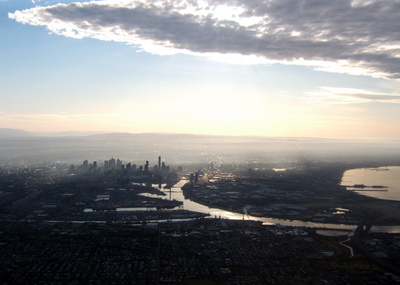 Slept all the way through the continental breakfast, in fact and woke up once we began descent into Melbourne.  The area looks very much like Denver only a bit hillier; very dry because of the drought.  As we neared the ocean, a thick marine layer of clouds was settled over the land much like San Francisco.  The area by the airport, further inland, was clear.

Right: Downtown Melbourne looking east, with the Yarra River and Port Phillip Bay on the right.

Immigration was a minor hassle; not much wait but I was questioned extensively and then a second gentleman stopped me and asked the same questions again.  A bit groggy, I started to get nervous, even while I didn’t have anything to be nervous about.  Many of the questions surrounded how I knew Stephanie, with whom I’m staying.  I’m quite curious how I must have come across: an American who has been spending a lot of time in Thailand, coming to Australia to stay with a friend and to apply for a Thai visa.  But they let me through.

A word of note to anyone traveling here: all baggage is x-rayed by customs for fruits, veggies, other foodstuffs and prohibited items.  This is not a country to try sneaking anything into!

As it was early Sunday morning, there was no traffic as Stephanie tooled the rental car back to her house on the south side of the city.  I had about a half-hour to freshen up and then we went for walk to the nearby shopping district for coffee and a light bite of brekkie.  That’s Australian for “breakfast,” mate.

The corner cafe was fantastic, with all of these older couples stopping to chat with one-another.  I took a picture of a cute beagle and his owner insisted on standing him up to pose: 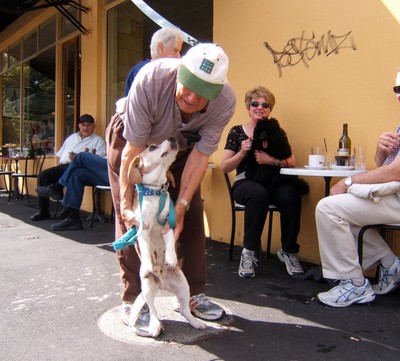 The neighborhoods are fantastic here – all of them remind me of Toronto! 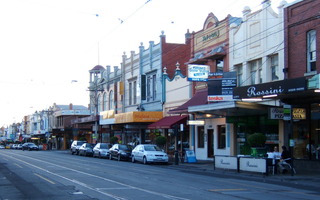 All of the neighborhoods, at least the older ones, have these little “downtown” shopping districts, sometimes just a few blocks long and sometimes more extensive.  There is a good tram/trolley network and they run down the middle of the streets.  While malls and mega-stores have begun to make an appearance in the newer suburbs, there are a lot of older suburbs that simply haven’t the space, so mom-and-pop shops thrive.  For San Franciscans, think West Portal or Union Street with a lot fewer chain stores, and that is the idea.  But these cover a much larger area than SF. 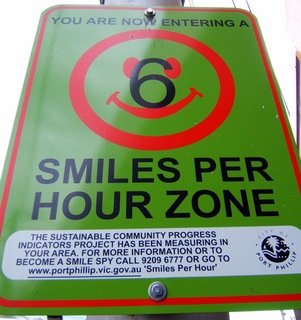 Right: Something interesting in this neighborhood: a Smiles per Hour Zone.  Click here to learn more.

The weather was perfect for a trip to the Yarra Valley, one of the major wine-producing regions.  We met up with Peter, one of Stephanie’s colleagues, and his just-graduated-from-law-school daughter.  It was a fun trip and we not only made it to a few wineries including Yering Station, but also to a wildlife preserve that features all of Australia’s major animals: koalas, tasmanian devils, kangaroos, wallabies, etc.

Left: A koala lazing about in his eucalyptus trees, mirroring about how I felt by mid-afternoon.

That evening, Stephanie and I had dinner in St. Kilda’s Beach at Cicciolina, an Italian restaurant that was recommended by the cashier of a bookstore.  It was crowded, noisy, and really nice.  The waitress was super friendly and was well-rewarded as I didn’t understand that tipping is not a common practice in Australia.  And I left her what would amount to a generous tip by US standards.  No doubt I’ll be welcomed back!

Monday morning I set off with my transit pass to find the Thai Consulate General, which was about a 15-minute tram ride away.  Set on the third floor office of a low-rise office building (left), the consulate was tastefully appointed and had only the shortest of lines before a young Thai-Aussie man helped me.  Reviewing the documents he handed back the copy of my passport (“Don’t need that”) even though I had gone out of my way to get a copy earlier in the morning per the online visa instructions, and then handed back all of the incorporation papers from the law firm that sponsored me (“Already familiar with them”) telling me to come back to get the visa on Tuesday.

So, not to count my chickens before the eggs have hatched, but it sounds like the visa will be approved. 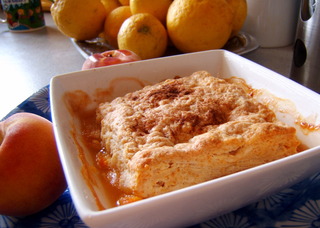 On my way back, I stopped at a green grocers for some… peaches!  Sorry that Tawn isn’t here to enjoy but stone fruit season is just starting here and that is one of the biggest things I miss while in Thailand.

So this evening Stephanie and I enjoyed some homemade peach cobbler (left).

Her colleague gave us a dozen lemons, too, so I’ll try a lemon souffle later in the week.  And I have my eye on the cherries… yum.

2 thoughts on “A Warmer Version of Toronto?”