Saturday was sort of a movie marathon day with tickets to a trio of screenings.  Fortunately, they were all quite good, the result being that at the end of the day I couldn’t think clearly about any of them.

Set in a small village in Romania, sixteen years after the revolution that saw dictator Ceausescu flee the country at 12:08 pm, the owner of a local television station invites two guests on the air to discuss the question of whether a revolution occurred in their own village or not.  In other words, were people protesting in the town square demanding Ceausescu’s ouster before 12:08 pm, or did they fill the streets after the dictator’s live televised escape by helicopter?

His original guests cancelling out on him, the television personality calls upon two acquaintences, on old retiree and sometimes Santa Claus, and a history teacher who has just devoted his entire salary to paying off his drinking debts.  On screen, they discuss their role in the historic revolution.  But phone-in viewers dispute the claims of these erstwhile heroes: were they really there at all or were they drinking in the corner bar?

The film, the winner of the 2006 Camera d’Or at the Cannes Film Festival, is tightly-made, clocking in at just 89 minutes.  Director Corneliu Porumboiu captures the absurdity and humor of the situation while also mining it for poetic beauty, asking whether we all don’t reinvent our pasts to some extent. 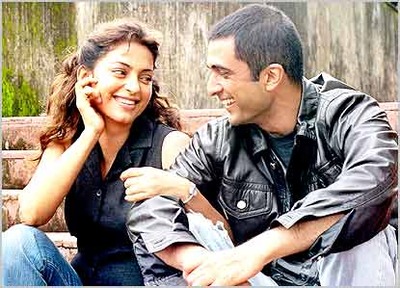 The debut feature of writer/director/editer Onir, this Hindi-language docu-fiction is based on the true story set in Goa of the late 1980s and early 1990s.  The story concerns Nikhil (Sanjay Suri), a swimming champion and the pride and joy of his father, and his close relationship with his sister Anamika (Juhi Chawla).

One day the team doctor calls him in to discuss the results of a recent blood test and Nihil learns that he is HIV positive.  The doctor’s claims of confidentiality are meaningless and the word spreads quickly through the town.

Shortly thereafter, he is arrested and isolated in a run-down sanitorium, the result of the Goa Public Health Act.  His friends abandon him and his parents move away.  The only people who stand by him are his boyfriend Nigel, his sister Anamika, and her fiancee, Sam.  They fight very hard to educate the public and after several months, earn his freedom.

But freedom from a sanitorium is not the same as true freedom.  He still faces tremendous discrimination and difficulty through a combination of laws (still on the books today) that make homosexuality a criminal offense, and the ignorance and fear of the population.

In the end the movie plays a bit like an Indian version of “Philadelphia” which is to say that it has an A-list cast, lots of stirring songs (actually, that’s more of a nod to Indian audiences than a comparison to the Tom Hanks movie), skillfully crafted tugs on your heartstrings, and no displays of affection by Nikhil and his partner.

That said, given the state of public awareness of the issues surrounding homosexuality and HIV/AIDS on the subcontinent, this movie serves a very good purpose and is quite notable, enjoying a modest commercial and critical domestic success.  Organizations including the United Nations are using it as an educational tool and it is being dubbed in other Indian languages for showing throughout the country in schools and elsewhere.

The director was present for Q&A afterwards and provided some intersting insight into how he got this film made, a five-year process that overcame a lot of obstacles.

The Feast of the Goat 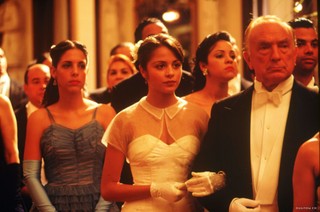 In this UK-Spain co-production, based on the novel by Mario Vargas Llosa, Isabella Rosselini plays Urania Cabral, who returns to her homestown in the Dominican Republic in 1992 after having been away three decades.  Her invalid father is Agustin (Paul Freeman), the President of the Senate and right-hand man of the dictator Trujillo – until he fell into disgrace a long time ago.  Over dinner with her aunts, who chide her for having been away from her father for so long, she discloses the experiences that haunt her as her father gave away his most cherished possession in order to try to regain Trujillo’s trust. 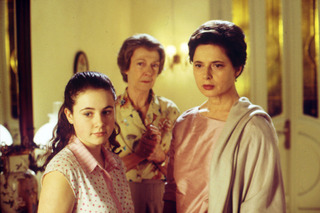 The film also tracks the story of the men who sacraficed their lives to end one of the bloodiest tyrannies of recent Latin American history.  Their story and that of Arania are intertwined in an intense kaleidoscope of love and hate, violence and death.

Under the direction of Luis Llosa, the actors achieve very strong and believable performances, while lensman Javier Salmones captures the bright airiness of the tropical setting and contrasts it with a darkness that echoes the developing story.