Convenience and cost usually weigh out in the decision of what to eat for dinner: fast, inexpensive, and nutritious food is readily available at corner restaurants and food vendors throughout Khrungthep.  I’ve sat down and calculated it, and most of the time I could not make a dinner for two for the same amount (about US$ 4.00) that I can get two servings of rice and three side dishes from a local gap khao (literally, “with rice”) vendor.

However, sometimes I go ahead and cook at home just because I enjoy doing it and because there are some things that I can make at home less expensively than if Tawn and I went out to eat them. 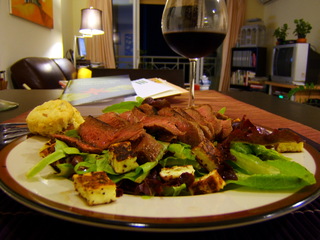 For example, Sunday afternoon at Central Food Hall I found a pack of two marinated New Zealand steaks for only 77 baht ($2.10).  Along with a some salad greens, I had a nice pan-fried medium-rare steak salad.  With a glass of cabranet-shiraz from Australia, it made a very satisfying dinner.

Yesterday I made use of a loaf of pugliese that had been sitting in my refrigerator for a few days and had become a brick:  it became panzanella, Italian bread salad, with tomatoes, cucumbers, grilled chicken breasts, and a red wine-balsamic vinaigrette.  Served with a side dish of garbanzo beans pan fried with rocket, it made for a simple, flavorful dinner.

But after a few days of this fancy western food, I’m craving some tom yum goong and pad khao!

This afternoon after my Thai tutor session, Tod and I met to discuss lesson plans for the classes in Bangkhonthii.  It is his idea that we should start back at the very beginning, reviewing the alphabet and the basics of phoenetics so that the children are better able to read.  While the “point” of us being there is to increase their skill and confidence with conversation, when they can’t read what’s on the board, it slows the entire process down.

Additionally, we’re in agreement that we need to find out from the principal what exactly is happening during the regular English instruction.  That way our efforts can be more complementary rather than operating off on our own tangent.