Yesterday was the series of test flights at the new Bangkok airport, Suvarnabhumi (silent “i” at the end).  It was a lot of fun and I’ve compiled an extensive trip report on airliners.net. 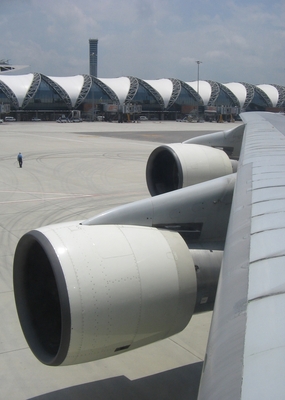 The trip over was like a big party.  Everyone was decked out in their yellow shirts in honor of the King.  Goodie bags were handed out with souvenirs.  People clapped and sang on the flight.  As the Thais like to say, it was sanuk maak maak!*

Architecturally, the airport is modern, efficient, and utterly soulless.  It is lacking any design flourishes that would identify it as being in Thailand.  You could be in Seoul, Hong Kong, or Charles DeGaulle and not know it.  That said, given the well-worn state of affairs at the existing airport, a modernisation is long overdue. 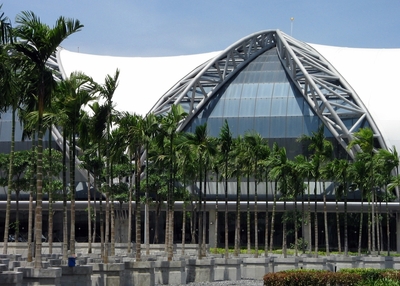 The building itself is gracefully designed and near the main terminal there are expansive gardens that add a nice visual effect.  You can stroll in them, which is pleasant, but you have to work your way down the equivalent of about seven stories.

Security was interesting.  I entered and exited the building at various levels (arrival, departures, car park, etc.).  At some entrances there was a contingent of guards checking all bags and scanning everyone with a metal detector.  At other entrances there was a sole rent-a-cop on a folding chair, napping. 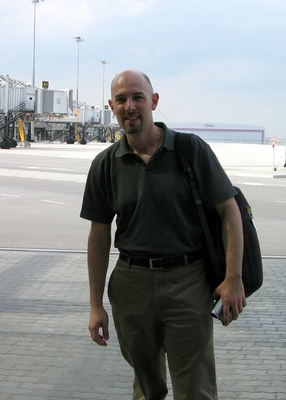 Even more intertest is that I was able to work my way to the tarmac through a emergency fire exit stairwell that had been propped open.  Then I went walking around the tarmac for about ten minutes, taking pictures, without anyone stopping me or challenging me.  Along the way, I passed one person in a security uniform, and stopped another person who was wearing an Airports of Thailand PLC shirt to ask him to take my picture.

There has been much speculation whther the September 28 opening day can be met.  From my observations, it is evident that the airport is ready to handle airplanes.  Jetways work, moving sidewalks work, etc.  The systems themselves – well, this wasn’t a full-scale test so it is hard to say.  But come September 28, it is safe to say that there will be many, many unfinished things in the building.  Shops, eateries, airlines’ offices – they will all be in a state of chaotic disarray.  Note to self: don’t fly anywhere until at least the second week of October!

1 thought on “Security Breach at Suvarnabhumi”