Sorry for the back-and-forth nature of this week’s entries but I wanted to provide you with both the latest and most up-to-date information on the happenings here in Bangkok, while at the same time delivering a recap of my trip to Hong Kong.

On Tuesday I was scheduled to fly home from Hong Kong to Bangkok at 8:45 in the evening.  Figuring that a late arrival would not be a lot of fun, I called the THAI Airways ticket office in Hong Kong and asked whether I could standby for an earlier flight.  The response I received was a little non-committal and it sounded like the best bet was to go ahead, check in, and see what the agent at the airport said. 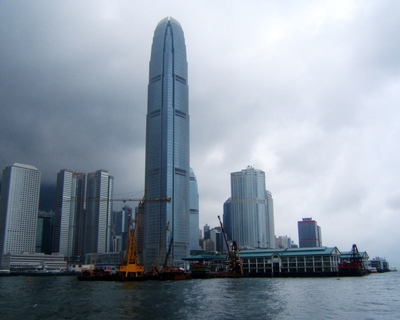 Fortunately, Hong Kong has a really nice Airport Express train service that includes check-in services on both Hong Kong Island as well as in Kowloon.  So I took a taxi to the Central Airport Express terminal, which is tied into the new IFC building (the tall building in the center of this picture) and mall complex, and checked in.

Unfortunately, the agent there told me that because of my ticket type (mileage award travel) I could not make changes once I had already started travel.  I think that if the agent had actually been an employee of THAI (this was a Cathay Pacific employee working on their behalf), he or she might have looked at the loads for an earlier flight and said, “okay, there’s a seat we’re not going to have filled so let’s go ahead and put you on that flight.”

Since an earlier flight was not an option and heading back to Chris and Tehlin’s house would have been cumbersome, I went ahead and explored option “D”: Disneyland.

The previous day, Big Michael told me that he, his sister, and her boyfriend would be going out to Disneyland using some free passes from a friend who works there in Human Resources.  He invited me along, but I had declined thinking I would be taking an earlier flight home.  My plans had changed, though, so I called him up to see if the offer was still available.

So after killing some time with rides on the Star Ferry and on the HK Island Tram, stopping at the general post office to mail some postcards, and eating breakfast, I took the MTR out to Sunny Bay on Lantau Island, where I connected to the MTR Disneyland Shuttle. 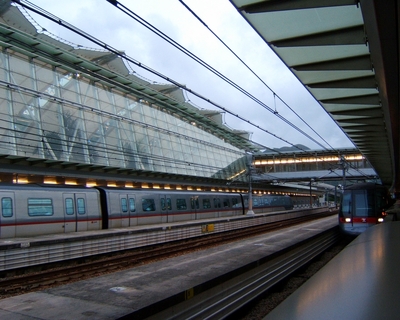 The Disneyland Shuttle is a spur line that connects from the futuristic Sunny Bay station to a point about a five-minute walk from the front gate of Disneyland.  The Sunny Bay station is also unique in that it is the only MTR station that has open-air platforms, the rest being enclosed with glass walls and doors.

Here are a few shots of the specially-designed Disneyland Shuttle train.  While the same basic design as used on the rest of the MTR, the seats are plusher and laid out into little seating areas that are good for families and groups of people.  The interior has starry skies painted (or actually adhesed as these are stickers) onto the ceiling, and statuettes of various Disney characters.  The most noticeable thing, though, are the Mickey Mouse windows. 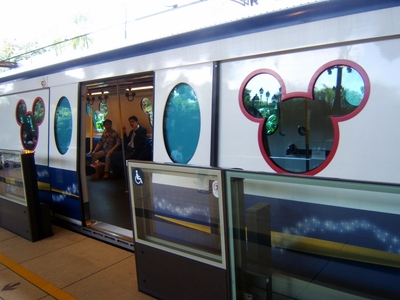 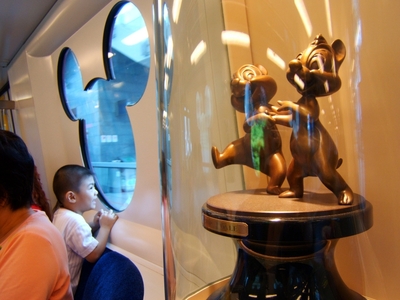 I met Michael and his sister and her boyfriend at the Disneyland MTR station and we proceeded to the front gate.  Michael’s friend was there with the tickets and we were soon on our way into the Magic Kingdom. 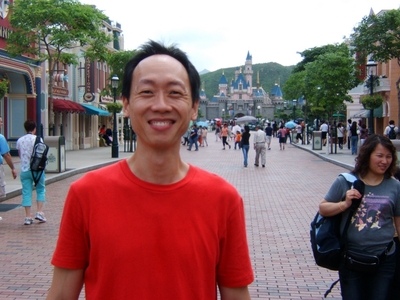 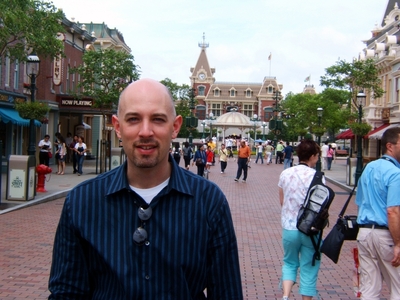 Above: Big Michael on Main Street USA; Chris at the same point but looking back at the train station.

Since its opening, the Hong Kong press has criticized HK Disneyland for failing to meet attendance expectations.  The crowds were very light on Tuesday, although the weather was not the best so that could explain some of it.  That said, I don’t think we waited more than five minutes for any ride.

Speaking of rides, HK Disneyland has many fewer rides than the other Disney parks to which I’ve been.  They are already in the process of adding two additional rides (including an Autorama) to the park, but each of the three themed areas (only three, no Frontierland) have maybe two or three major attractions along with a few other ones.

For example, there is Space Mountain, a Toy Story inspired Space Blasters ride that uses the ride technology from the Haunted Mansion (a conveyer belt of pods that can be rotated), the Jungle Cruise, the Magic Teacups, and the Dumbo ride.  But there is no Splash Mountain, Matterhorn, or Indiana Jones ride. 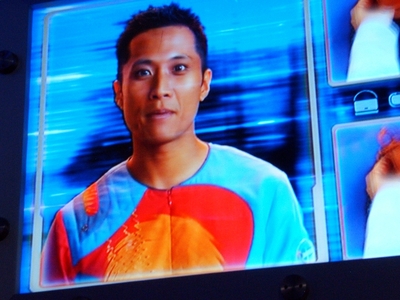 Space Mountain is a true recreation of the original with a good queuing system, great music effects, and it is a lot of fun.  While in line a short video shows on overhead flat panel screns providing an introduction to the safety procedures for the ride.  It rotates through Mandarin, Cantonese, and English and has two narrators who take turns speaking: a woman and a man.  They are interesting because their accents are flawless (Big Michael verified the Canto and Mandarin for me) and they both have a pan-Asian sort of look.  A very Disney choice.  Plus they are wearing these cool futuristic jumpsuits. 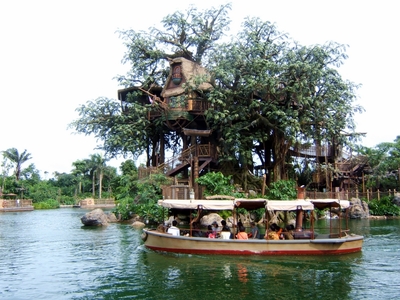 The video below includes some scenes from the Jungle Cruise.  It also includes the over-use of the word, “cool.”  Sorry that I couldn’t come up with any more original description. 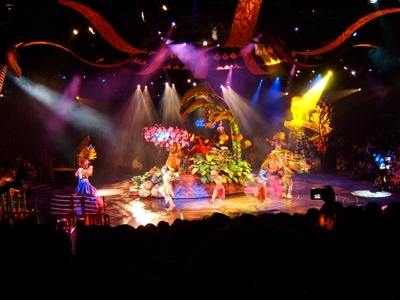 The highlight of the day was the Lion King Festival, an indoor show that basically condensed the entire story of the Lion King into a 25-minute spectacular with a cast of about 30 people.  Situated in a theatre-in-the-round, it looks like nothing so much as a Cirque du Soleil production.  There are even cool fire effects.  It was well put-together and the way that language issues were dealt with was interesting: the songs were in English as was the main narration, but there were two “monkey” characters who served as sort of a chorus to amplify (but not repeat exactly) the narration in Mandarin.  Overhead monitors provided supertitles in simplified Chinese characters for Cantonese speakers. 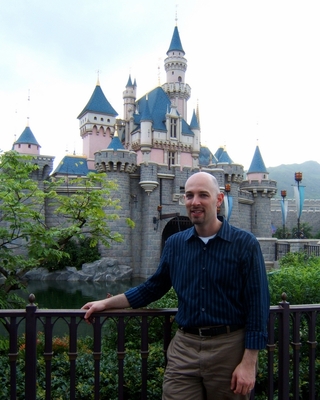 The most noticable thing about the park was that the castle is very small.  Maybe this is just my faulty memory, but I recall the castle in the original Disneyland as being bigger and, especially, taller.  This castle seemed downright puny, especially when viewed against the backdrops of the mountains on Lantau Island.

The picture above that shows Big Michael on Main Street USA illustrated the point well; the castle looks like it is so far away from him, but it is only about a three-minute walk!

So by six o’clock I had ridden everything, some things twice, had watched a show, had dodged a thundershower, had eaten a Char Siew pork burger, and done battle with a stubborn ketchup packet resulting in stains on my shirt and pants.  It was time to head to the airport.

All in all, Hong Kong Disneyland is a very nice park and upholds the Disney standards of cleanliness and friendliness quite well.  People are a little less perky than their counterparts at other parks, but good overall.  Until it has more attractions, though, the incentive to be a repeat customer is pretty minimal.