Thursday or Friday evening past, we had a fantastic sunset.  For several minutes the entire western sky was this incredible shade of orange, which reflected an orange glow onto the rest of the city.  It only lasted a few minutes, though.  Just long enough for me to snap these pictures: 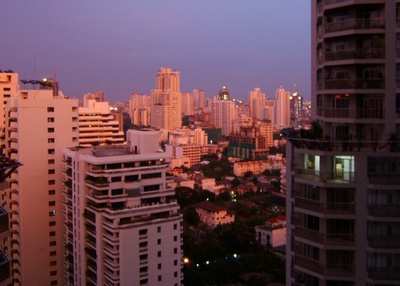 Above: view looking east with the sunset reflected on the buildings

Below: Looking southwest with the sunset reflected in the neighboring office building 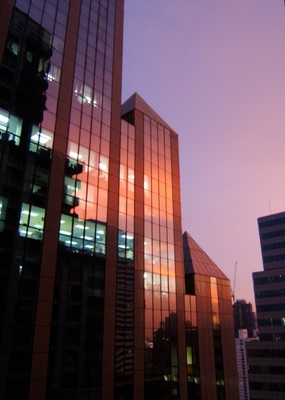 Sunday evening Tawn and I went to the Siam Apex cinema, one of these old single-screen 1,200-seat theatres in the Siam Square area, to watch “Always: Sunset on Third Street.”

Set in 1958 Tokyo, Japan, this story is based on a popular manga (cartoon books) series about the intersecting lives of locals who live in a neighborhood near the under-construction Tokyo Tower.


The story follows rural schoolgirl Mutsuko, who arrives from the provinces to begin her first job with Suzuki Auto. Initially impressed by meeting company “president” Norifumi Suzuki, Mutsuko is shocked to discover her workplace is actually a shabby auto repair shop in Tokyo’s down-at-heel Yuhi district.


Suzuki is a bad-tempered employer but Mutsuko is welcomed by his wife, Tomoe and their impish 5-year-old son, Ippei.  One of Ippei’s favorite haunts is a five-and-dime store managed by struggling serial writer Ryunosuke Chagawa.


When alluring newcomer Hiromi opens a sake bar in the area, she gathers clientele quickly but also finds herself lumbered with Junnosuke, the orphaned offspring of the bar’s previous owner.  Drunk, and smitten by Hiromi, Chogawa accepts custodianship of the boy.


The computer graphic effects are high quality, recreating the postwar era beautifully.  The cinemaphotography and set design are also the stars of the story.  One of the most telling sequences is when the Suzuki household becomes the first to have television and the entire neighborhood shows up to watch the first broadcast.  The broadcast is of a professional wresting match and on screen the several dozen locals are suddenly enveloped by the picture as if they were at the actual fight, conveying well the sense that watching a TV for the first time must have created.

All in all, while the plot jumps along in compressed and contrived ways (it was a manga after all) there are some really touching scenes.  Well worth checking out if it gets to a cinema near you or if you have Netflix.  The soundtrack was also gorgeous.  If you have broadband access go to the movie’s official site – while it is in Japanese, the main page plays some of the theme music when it loads.  This English language site has a more detailed description and stills from the film but none of the beautiful music.