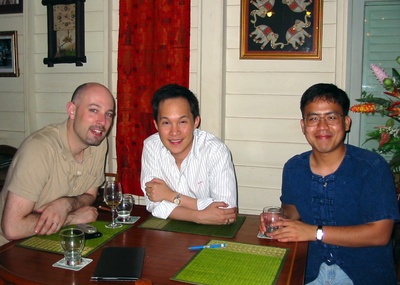 First things first, even though I seem to be increasingly in the delayed picture posting mode, here is a picture of Ryeroam (Jaturong), the Thai guy in Mexico who I’ve been chatting with through airliners.net.  As you may recall, he was here in Bangkok a week ago visiting his family and Tawn and I met him for coffee and dinner.  Not having my digital camera with me, I had to wait for his return home to receive the pictures.  The first of his trip reports on his round-the-world journey has been posted on a.net.  Click on the photo for a larger view.

Now to today’s main story, my amazement with technology:

For millions of people each day, receiving a package from United Parcel Service or UPS, is a routine occurrence.  The clean, professional brown-clad drivers pull up in their clean, professional brown-painted vans and trucks, scan the packages with their rugged brown computer devices, have you sign your name, and then hop back in their trucks with you left holding the bag… or the box, as is more usually the case.

But then yesterday, I needed more information that what I already had and that is where I encountered and was stunned by the level of technological sophistication that exists in this world.

Ryan Lam, a high school friend whom I first met as Chien Tang (and later became Chien Lam en route to becoming Ryan Lam – an interesting story that is probably not mine to share with you), will be arriving here next Thursday for a two-week visit.  Always one to take advantage of any carrying capacity someone has in his or her Bangkok-bound suitcase, I asked if he would be willing to bring over some coffee.

Tawn and I are big fans of Royal Blue Organics’ Cafe Mam coffee – organically produced, shade-grown coffee cultivated on small, family-owned farms in Chiapas, Mexico.  RBO is a small operation out of Eugene, Oregon and I was first turned on to the coffee when I first moved to 330 Eureka in San Francisco.

Nina Hall, Colleen Brennan (now Connors) and Anita Mak were my roommates and Nina had discovered this coffee from her days at UC Berkeley and was ordering it.  Once Nina left the States, I continued to order and have done so faithfully since then.

RBO is the nice kind of small business that you can just email or phone and say, “Hi, it’s Chris in San Francisco – can you send me five pounds of Italian Roast, whole bean?” and that’s all you need to say to place the order.

Since Ryan was willing to bring over the coffee, I went ahead and dropped Erin at RBO a line and she made sure the coffee was roasted the same day and shipped out.

So back to yesterday, Ryan and I were exchanging emails in preparation for his visit and he asked when the coffee would arrive.  Erin had emailed that it would be there no later than Tuesday – the day before Ryan departs for Khrungthep – but it occurred to me that since it was travelling by UPS I could actually track it.

And that’s when my revelation occurred. 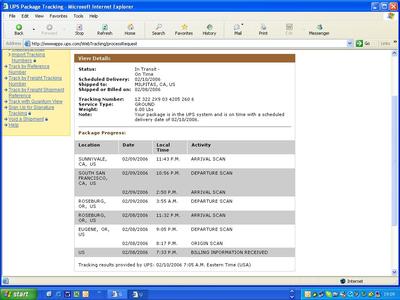 Copying the tracking number from Erin’s email, I went to the UPS website and entered the number into a tracking field on the home page.  The results astounded me (screenshot attached): I was able to trace the package on ever step of its journey from Eugene to Milpitas, and could tell that at the particular moment that I replied to Ryan’s email, the box was at the UPS sorting facility in Sunnyvale and would be delivered to his house, six or seven miles away, the following day.  What incredible detail.

Now the rest of you may well be sitting here (espcially you high-tech types) thinking, “Duh, that’s been around for ages!”  But you have to understand that the last time I used UPS to track a package, it just simply had some text saying something like “In Transit.”  I’ve never been able to see such explicit detail on my package’s progress and I would imagine that if the package was misrouted or lost along the way, I’d be able to see that, too.

That, I think, is the ultimate in transparency.  This lets the customer see the company’s performance in near real-time.  Now I know how you’re doing with the business I give you.  This, in my mind, is immensely cool.

1 thought on “Stunned by Technology”