The more humid it is in Bangkok, the hazier it is.  The hazier it is, the more beautiful are the sunrises.  As I get up about 5:00 or 5:15 most mornings, by the time I begin preparing breakfast I get to watch the sky as it goes from black to indigo to blue to pink to light.

A week of studying has brought me a bit closer to proficiency.  Another student, a half-Thai Canadian who is a few modules ahead of me and is studying classical dance at one of the Arts colleges in Bangkok, turned me onto a secret that I didn’t know about Union Language School:

The kitchen, it seems, is a quasi-buffet with the teachers (and a few students) bringing different food for snacking, much if it from their home villages.  Many of the teachers don’t live in Bangkok proper, and commute from a good distance outside of the city.  So on Friday I was able to enjoy Issan (northeastern Thai) style khao niaw (sticky rice) with a homemade nam prik (chili sauce) as well as these small, quince-like fruits that came from someone’s home.  Quite an exciting discovery.

The teachers who were snacking didn’t quite believe I really liked spicy foods.  This, the Canadian told me, is pretty consistent with Thais: they simply don’t believe that farang really can handle the spicy stuff.  The secret, I’m told, is to never let them see you sweat! 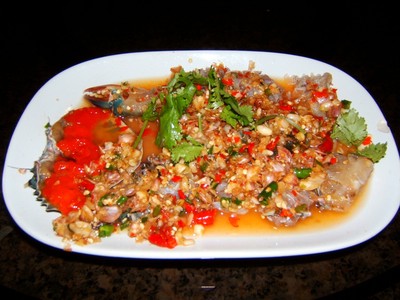 Speaking of chili, last Friday we had dinner at a seafood restaurant in the Victory Monument area with Pim, Ja, and Eddy.

The specialty of the restaurant is a ceviche-like dish of crab that is marinated in a mixture of garlic, chilis, fish sauce and lime juice.  It is served without further cooking, as the acid in the lime juice cooks the crab.  The taste is, as you might imagine, very spicy.  The flesh remains very soft unlike when it has been cooked by heat, which makes its consistency more solid. 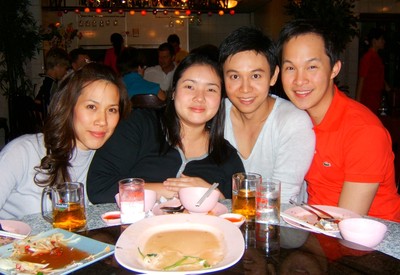 Here’s a picture of Pim, Ja, Eddy and Tawn at the restaurant.  Notice the empty plates in front of them.  Thais don’t let their food go to waste!

Okay, to get on to the story related to this entry’s headline:

As you may know, the movie Brokeback Mountain is causing quite a sensation in the United States.  Known as the “gay cowboy movie” it is director Ang Lee’s interpretation of the short story by E. Annie Proulx.  Critically acclaimed and winning crossover audiences everywhere (as well as awards), the movie has become a source of great humor over the consternation felt by heterosexual men who might eventually be forced to watch the movie.

Our friend Tomas Leal, formerly of Houston but now living comfortably in London, forwarded the link to the MSNBC column written by Dave Wright, titled “The Straight Dude’s Guide to “Brokeback”.  It is just the funniest thing.  Here’s a brief selection of the introduction and you can click the above link to read the whole thing:

“You are a heterosexual man.  and you have no personal beef with gay people.  …  But your girlfriend/wife/common-law/female or whoever loves that adorable Jake Gyllenhaal and has already stated her intentions.  When it’s her turn to pick the Saturday ngith date-movie, you’re seeing “Brokeback Mountain.”

“But I am a heterosexual man,” you’re thinking, “very, very, very, very straight.” And you’re kind of freaking out as the release date quickly approaches …

And yet, you’re still going to see it whether you like it or not. This necessarily presents a dilemma: how to make her happy and endure your first gay-themed movie where guys actually make out on a very big screen right in front of your face?  And that’s where I come in.  I’m a red-blooded American male homosexual movie critic who’s already seen “Brokeback Mountain.”  And I could just tell you how great the film is, that it’s really powerful and moving and all that, but that isn’t what you want to hear.  So I have some viewing tips for you, my straight brothers. I promise I’m only here to help…”