The days of rain, clouds and overcast were banished from the Kingdom at 5:30 this morning and sun – bright, pure, unadulterated and incredibly hot – bathe the streets of Khrungthep.

This is in stark contrast to Tuesday morning, when I went to Union Language School to get signed up for my Thai language classes which begin next Thursday – the day after my 35th birthday.  When I emerged from the Metro at Si Lom station (or “Silom”, if you prefer – lots of flexibility in the Anglicization of words here) the skies were dark and very threatening.  You could smell the rain hanging heavy in the air, about to fall.

One of the many international primary schools was on a field trip to Suan Lumpini (Lumpini Park).  There were perhaps seventy or eighty students all around the age of six or seven, divided into regiments of a dozen students each and maching in uniform lines – each soldier holding hands with his or her buddy.  All were properly equipped with rain slickers, which are very lightweight here owing to the heat, and one teacher or monitor was in charge of each group, seemingly holding all of their hands at the same time, herding them away from the myriad hazards one finds at one of the busiest intersections in the city.

A few minutes later, as I sat in the registrar’s very 1960’s-era office on the 10th floor of the CCT building, I looked out the window to see that it had started to pour torrential buckets of rain (multiple metaphors).  Imagine the field trip: children either cowering under whatever minimal shelter they could find at the park or else running about splashing with joy in the puddles as their minders fretted and tried to regain control and move the herd to higher and drier ground.

After signing my life away in triplicate (literally three diferent, nearly identical forms – the Thais are a bueuracracy-loving people) and paying my 6200 baht (about US$155) I am official enrolled (no refund!) at this Southern Baptist-founded language school.  In their own words, “registered by the Royal Thai Department of Education as meeting the high standards of informal education.”

Last night Tawn arrived home very late from work, after 8:00.  As he was wrapping up at the office, his manager (the Director) asked if he was free to meet.  The meeting lasted two hours and the substance of the conversation was… me!

Tawn’s company, the USA-based public relations firm of Hill & Knowlton, is taking all of their Bangkok employees on an appreciation trip for four days to Seoul, South Korea in December.  As part of the deal, employees can bring their spouse (but no children, parents, or boy/girlfriends) if they would like to pay the added expense – about 28,000 baht all-inclusive.  Tawn’s friend Mon, who also works at H&K, had let slip the day before that Tawn was planning on bringing me along as his spouse.  Tawn’s boss was concerned about how to handle things, especially as Thai culture doesn’t really have the concept of “domestic partnership.”

So Tawn’s boss had consulted the various oracles including the older, conservative, and very straight director of finance, and finally sat Tawn down to discuss the situation.  Fortunately, Tawn didn’t have to get Margaret Cho with her.  She decided that H&K should be a very progressive organization and that if Tawn said I was his spouse then she was looking forward to meeting me.  Secretly, I think that she is interested in the possibily of hiring me to do some English-language work for her.  But they wouldn’t sponsor a work visa nor pay me at US pay rates so that might not work!

Anyhow, it looks like I’ll be going to Seoul.  Unfortunately, it is about the same time that Aaron Wong will be in town. 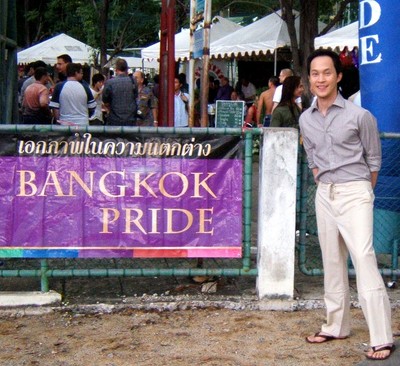 As promised, here are some photos of the Bangkok Pride festival this past weekend at Lumpini Park.  It really was a small affair, but they had badminton and volleyball competitions going on and the volleyball players were really good. 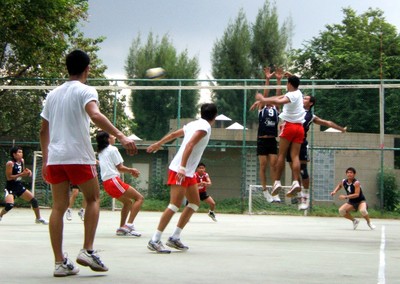 We ran into a former United Airlines colleague of Tawn’s and he told us that the players (or one of the teams, perhaps?) were former national-level competitors.  Of course, the first thing to come to mind was the movie Iron Ladies based on the true story of a championship volleyball team composed of gay men, transgendered people, and one straight man. 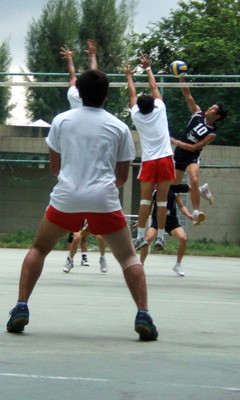 The second thing to come to mind was Alan Leung, Anita’s cousin in Toronto.  He is quite the volleyball player, but recently injured his ankle and is recuperating.  He’s a very accomplished interior designer / architect – check our his website.

This afternoon the handy man is supposed to arrive to… drumroll, please… hook up our clothes washing machine.  Remember that this is sitting out on our balcony and there is no water nor any power source nearby.

The plan as I understand it to run water through the ceiling from the main line in the bathroom and have it exit on the balcony.  Sounds a bit crazy, right?  There is a conduit and closed box on the balcony so I think that there is either power in it or a line could be run to it relatively easily.  In either case, I’m hoping that by this evening I can wash clothes because there really are very few laundry services available.  There is one service that picks up at the condo office, but it took a week and cost 700 baht for 15 pair of socks, 15 undershirts, and 20 pieces of underwear.  I think that’s a bit outrageous as I can wash those perfectly well.